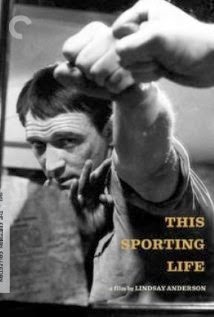 Richard Harris plays Frank Machin, a man who speaks with his fists all too often in this 1963 film by director, Lindsay Anderson. It takes place in northern England in all its grimy glory where Harris is recruited for a rugby team, a sport he seems perfectly suited to.

Rachel Roberts is the widow with two kids he becomes strangely infatuated with despite almost no encouragement from her. If you saw this film today, you would wonder if his interest was more in her kids, but not in 1963.

Harris is a bit too reminiscent of Brando in STREETCAR and Burton in LOOK BACK IN ANGER but he dominates the screen in his own right. Albert Finney was meant to play the part as he had starred with Roberts in SATURDAY NIGHT AND SUNDAY MORNING a few years earlier. But scheduling problems brought Harris on board.

Oddly, we see very little rugby. Perhaps it is not the most cinematic sport. Rachel Roberts does not garner much sympathy either. Did she ever? I wonder if another actress might have played her role very differently.

Where this film succeeded best for us was showing us northern England: the look of it, what people did for fun, how frugally most people lived there. It was beautifully put together.

We saw this film at the MOMA in New York. What a great program of films they have!

Has rugby ever figured into a crime fiction novel?
Posted by pattinase (abbott) at 11:30 PM

At the time is wasn;t taken as seriously as some of the other realist films for its use of flashback and so on, and it is a bit of an endurance test - but it is often brilliant none the less.

Patti - This is a great choice for TFM. And you ask an interesting question about Rachel Roberts. I often wonder what a role would be like if another actor had it.

Don't know what happened to my long post about "kitchen sink" films--perhaps it will miraculously reappear. Anyway, regarding rugby, there's a mystery either by Jill McGown or Minette Waters where a rugby player is a suspect and the game plays an incidental role. Perhaps someone remembers the title.

I've mentioned before how much I love those British "kitchen sink" dramas from the early-to-mid 1960s: the product of post-war "Austerity Britain" showing the very pinched lives of working-class Brits, especially in the hard-scrabble north. Films like "Alfie" and "Georgie Girl"--although ostensibly about the same types--rang the death knell by making their main characters too "big" and too philosophical.

As for your question about rugby, there's a Jill McGown mystery where a rugby player is one if the suspects and the game plays an incidental part. Perhaps someone with a better memory than I have will remember the title.

COMMENTS ARE COMING TO ME VIA EMAIL BUT NOT SHOWING UP, DEB. I WILL REPOST.

It's funny, but when I read the title I immediately thought of Finney. No, Rachel Roberts generally came across as cold, I think. I don't remember the details of this one as it's been years. I do like that early 60s genre of black & white British dramas.

The rugby drama I remember was not a movie but a play, David Storey's THE CHANGING ROOM. The British production was directed by the same Lindsay Anderson. We saw the original New York production, which was the breakthrough role for John Lithgow, who won the Tony as Best Featured Actor in his Broadway debut. George Hearn, Tom Atkins and Richard Masur also starred. It was memorable too for the casual male nudity as it took place in the locker room before, during and after a rugby match.

Deb, do you mean Reginald Hill's A CLUBBABLE WOMAN?

It's funny, I was going to mention GEORGY GIRL there too, before I read your remark. How can you go wrong with that cast? Lynn Redgrave, Alan Bates, James Mason and Charlotte Rampling. Jim Dale wrote the lyrics of the title song, by the way.

This is a movie I've never seen or heard of. Now I'll have to track it down.

Just checked. It was indeed Hill's A CLUBBABLE WOMAN that not only centered on a local rugby club but was the book that introduced Dalziel & Pascoe.

Jeff--you may be right. I just remember the rugby player being a suspect. For some reason I thought it was a female writer, but A Clubable Woman rings a bell. I went through a phase where I read massive amounts of British mysteries and sometimes my memory gets confused.

Through the miracle of internet searching...RUGBY MYSTERIES:

Caveman Politics - Jay Atkinson (1993) "the story of a young journalist/rugger named Joe Dolan who becomes a sort of detective, uh, well, you see a teammate is accused of murder"

Jacquot and the Fifteen - Martin O'Brien (2008) At a reunion of French rugby players "past rivalries soon re-surface and when one of Jacquot's old team-mates commits suicide in a pool-side cabana, his suspicions are aroused. Is there a killer amongst them?" The police detective Jacquot is also one of those former rugby players at the reunion.

I think one of the reasons we don't see much rugby played on screen - as opposed to talked about or as character background, is because it can be difficult to tell what's going on from the camera's viewpoint.

I was also going to mention CLUBBABLE WOMAN, though I have not read it yet (on the long library list) I saw a blurb recently.

I saw Richard Harris on stage once, and I believe he'd been imbibing. True story.

Not a novel, but I'm surprised no-one has mentioned Doyle's "The Adventure of the Missing Three-Quarter".

Patti, I remember first reading about "This Sporting Life" when I was looking through an old TV Guide and stumbled on the listing for the 1963 Academy Awards. I found it interesting at the time that both Harris and Roberts had been nominated for Oscars, but not the film itself. I made a mental note of it, and finally caught it in a late-night showing on a PBS station some years later. It was quite unlike what I had expected, and has come to be one of the movies I most appreciate.

As Sergio says, the use of flashbacks was very interesting (and much in keeping with the narrative structure of the book), but I'm surprised nobody mentioned the striking score by Roberto Gerhard - incredibly evocative of the atmosphere Storey and Anderson wanted to convey.

And of course, for us Whovians there's William Hartnell in a great character role!

Thanks for giving this movie some visibility.

I love all the British films from the forties through the sixties. They weren't afraid to put real people on the screen, both the actors and the characters they played. They respected working people far more than American films do.