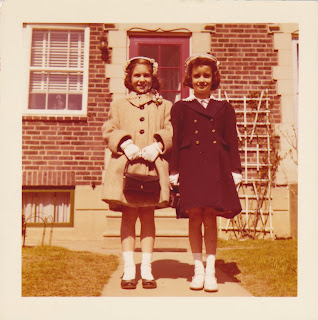 When I was five, a girl finally moved onto our street in Philadelphia. She had brown hair and gray eyes and was beautiful. She liked all the things I liked.  People used to call us the Bobbsey Twins.

I bossed her around mercilessly. (She was tolerant of bossy friends)

Her mother served us pretzels and pepsi, which I found amazing. We made tents that went on for miles. Her mother had trunks full of costumes we liked to dress up in. We did all the things girly girls did in the fifties. She was good at the hula hoop and skating. I was good at hopscotch and jacks. We each had a Ginny doll. Hers was pristine. Mine was so messy it had to be replaced. We had sleepovers. We were brownies together. She was a Methodist. I was a Lutheran.

In sixth grade, we finally landed in the same classroom. Oddly, this was the beginning of the end because she had built up a group of classroom friends and so had I. It was hard to separate home from school.  Doris got her attention at recess. Ruth had mine.

When we went off to junior high school, I found more new friends and so did she. I should have kept in touch with Sally Walton. I wonder where she is now. Happy and healty I hope. 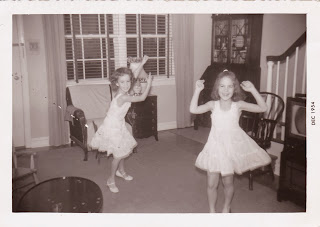 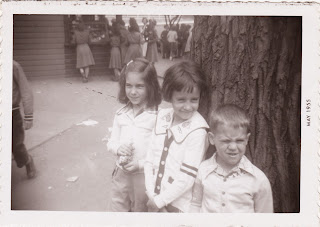 Who was your first friend?


Such glamor inside our teensy row house. We are six.


The boy is my brother, Jeff. We are at the zoo and I remember this day.
Posted by pattinase (abbott) at 7:30 AM

My first friend was a kid named Cyril Hawkins. He was a Canadian whose family moved into our neighborhood for a few years, then they moved back to Canada and I lost track of him.

Great memories, Patti! And I love the pictures.

My first best friend was Sammy House, who moved into my neighborhood when I was just a wee tyke and who went with me through the earliest grades of school. If memory serves, he and his family moved to another city before I was in fourth grade. I never saw him again. He was the one who taught me to whistle (which I can still do rather well). I trust he turned out OK, even without having me around to instruct in the essentials of life.

I wonder if anyone held on to their first best friend.

That's kind of hard to do, Patti, unless one remains in one location, and they do too, and you don't grow apart in any way. My own first best friend I remember is someone who I knew when I (I suspect we both) were four, but I don't remember her name...she was of Alaska native-nation ancestry, had a younger brother whom we played with but we two did most of the talking, and I thought their mother was stunningly beautiful (and very nice to the goofy [mostly] white kid from around the way). We moved away from Fairbanks not long after. Kim Sweeney, another girl, was my next friend who at least approached bf status, on the West Peabody, MA street where we lived. So much for the latency stage.

Our parents and my friend Tommy's parents moved into the same apartment building on the same day. We moved about five years later but our parents were still friends so we saw each other then and in summer camp but that was it. My mother stayed in touch with his mother until she died, albeit only occasionally.

I came to the U.S. in 1968 at age 11. I was in the 6th grade. I met Jean and we bonded because I was from England--"the home of Davy Jones." Although we haven't lived in the same town for over 30 years, I'm pleased to say we're still friends who communicate almost daily (thank you text messaging).

I have reconnected with two early friends through facebook and my brother. He went out and tracked one down for me. The Internet is amazing.
Every day is kind of amazing, Deb.
The same day forges a bond, Jeff.

I haven't kept in touch with my first best friend--I think it's because those early friendships are so connected to parents.

I've re-connected to high school friends n Facebook, but fiends it mostly feeds curiosity, not connection. I guess we all change more than we think...

As a Navy brat I rarely lived in one place for more than a year or two so my friends changed often. The earliest one I remember was Bobby Marucca, when I was five and we lived in Maryland.

Oddly, I didn't meet either the Fairbanks kids nor Kim through anyone's parents...Kim, who might still be living in the Boston area (quick and dirty tracking is easy) I think I met in class, though possibly on the street, and the Fairbanks girl definitely through being a neighbor.

My mother moved constantly as a kid and never had a best friend until HS. She kept her best friend from high school until they died, within a couple of months of each other.

Well, by high school, one has pretty much been formed...I'm still in touch with a number of people I met in HS...

I loved this post. And those photos are priceless. My first best friend was a girl named Effie Muldoon. I haven't thought about her name in years. I think I'll use it in a book.

If you don't I will. Great names, huh. I also love Cyril Hawkins.

This is a delightful post! I love the photos.

Love your photos of your childhood house on Gilbert Street... It's funny how these homes still are the same. Do you remember any of the other children that lived on the block?