The 48 Hour Film Project comes to Detroit on the weekend of July 19 - 21, 2013. Filmmakers from all over the Detroit area will compete to see who can make the best short film in only 48 hours. The winning film will go up against films from around the world.
Enter today! Space is limited.
This year, teams will be accepted on a first come, first served basis. Once the initial registration is complete, we will add teams to a waiting list.
Regular registration is $160. If teams register after Tuesday, July 16 they must pay a rate of $175.


Register for the Detroit 48HFP now!

In other news, a new issue of PLOTS WITH GUNS appears. It contains a story of mine that I like better than most and a wonderful tribute to Cort McNeel, the guy behind MURDERLAND. 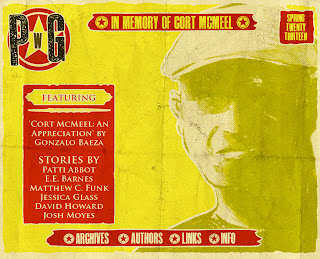 Patti - What a great idea!! Thanks for sharing this. Innovative!

I'll be looking for PLOTS WITH GUNS.

pattinase (abbott) said...
This comment has been removed by the author.
9:32 AM

I enjoyed the PWB story.