The Wives of Difficult Men 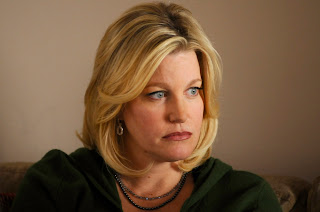 In the Alan Sepinwall book, THE REVOLUTION WAS TELEVISED, Vince Galligan, the creator of BREAKING BAD confesses puzzlement over how dangerous and difficult men on television shows are tolerated if not admired, but their wives, who often do not contribute to their nefarious deeds,  are largely detested. In WALKING DEAD, in fact, they got rid of the character.

Think of Betty Draper and Megan Draper (MAD MEN), Skyler White (BREAKING BAD), Carmela Soprano (THE SOPRANOS), Corrine Mackey (THE SHIELD), Lori Grimes (WALKING DEAD). All of these women are largely despised by the audiences of the shows they are on.

Why are the wives hated and the men tolerated if not loved? Some insight here.
Posted by pattinase (abbott) at 7:30 AM

It's all about gender expectations: Our culture expects women--especially if they are wives and even more so if they are mothers--to conform to a certain type--loving, patient, good, sometimes a little exasperated by the doings of her family, but never thoughtless or cruel. When women aren't these things, our society as a whole doesn't like it.

--"The endlessly patient and kind" Deb

The only one I've seen is The Walking Dead. My wife does indeed despise Lori. I never quite knew why. I generally liked her. A couple of things she did that I didn't like was when she seemed not to understand what she was doing when she kept trying to talk to Shane. I thought that was more the writer's fault, though. I think not as many writers know how to handle women in these kinds of shows.

How many of these shows were written/produced/directed by women? Something to consider.

Phil thinks that viewers resent women who profit from their husband's activities but then feign superiority to them morally.

Also posible, viewers just aren't interested in the non-players on a show.

Well, I don't think Rick (on WALKING DEAD) is "loved" by anyone. He is the leader - I'm not exactly sure why - but he isn't loved. And Lori, while "despised" might be a little strong, was probably more disliked for screwing her husband's best friend than anything else.

I agree with Phil's theory when it comes to Carmela, certainly.

Interesting question, Patti. I wonder if it has something to do with our societal expectations for the two genders...

A good and important question.

I would argue that in a couple of cases it's down to bad writing. I think both Skyler and Lori were both let down by the writers in the first two seasons. That leads on the the question of why....why do we write "problematic" men better than we write the rational and reasonable women in these shows?

And why are there not more female writers working on these things?

But aside from those two cases, I think the wider issue that your question raises points to the way we watch shows, and the different way 'we' treat men and women.

I root for the zombies on Walking Dead.

I actually LIKE Skyler, she showed that she's the one with the brains once she discovered what was going on. Walter got to plead sympathy when she kicked him out, for I dunno, endangering his whole family for matters of his gargantuan pride. I sided with Carmela as well, though that may be my personal history. I hate philanderers, and find Don and Tony to be weak, pathetic boys who never became men. Which makes them fascinating and valid characters, because it is very common for men of Tony's generation and beyond to remain adolescents.

Betty Draper and Megan Draper both love Don (despite his infidelity and drinking). People will do a lot (and put up with a lot) from the ones they love.

The only show mentioned I have seen enough of to comment is THE SOPRANOS, and Carmela is a detestable person. Part of what makes her so is what Phil mentioned, her hypocritical sense of moral superiority to Tony. In her way, she's just as bad. Remember the episode where she pretty much told her neighbor's sister to write a letter of recommendation for Meadow? I never had the sense she felt any moral outrage over Tony's activities except when it was convenient for her.

That's no defense of Tony, who was a detestable person his own self. He at least put himself on the line. Carmela's biggest issue with him was that he keep the money flowing so she could continue to live in the style to which she had become accustomed.

I never understood why Lori took so much heat. She thought her husband was dead for Pete's sake. Skyler was also cheating and their marriage was really over from the start of the show. His cancer just make it murkier for her. Betty gets little sympathy from me because when he told her the truth, she left him. Megan is underdeveloped.
Can't comment on THE SHIELD. Haven't seen it.
Carmela is afraid to try and make it in the world on her own. She has no skill set other than being a mother.

I offer Justified as the exception. Both Winona and Ava are well-drawn, dynamic and interesting characters, with Ava really taking a front seat in the last two seasons.

Also, I hated Skyler way back when she was Bullock's wife on Deadwood.

I haven't seen any of these shows but from a feminist perspective, I would say that if the men are "dangerous and difficult" and the women stay married to them, well, what is there to like about the women?

They don't have the courage to stand on their own.

In Loren Estleman's splendid novel, The Confessions of Al Capone, Capone's Irish wife Mae emerges as a powerful figure, a friend and caretaker of the gangster in his latter years, a partner in every sense, protecting him and caring for him, and warding off threats to him. There is no quack sociology in the novel; just a realistic portrait of a loving and protective woman circa mid-1940s

Richard-How are you? Been such a long time.

Doing well. Here's a story about my wife's retirement:

She sounds like an amazing person. A lovely article about someone who has clearly impacted thousands of lives. Congratulations to her and to you. And glad you are well too.

The new series RAY DONOVAN was created and is executively produced and so far written by a woman, and she's taking pains to portray Donovan's wife as kind of a sentimentally blind and spiteful fool, who wants to let her superficially charming ex-con father-in-law into her family's life in part because Donovan doesn't want him there ("You have a hole in your heart, Ray") and in part because she resents his cheating on her (as well as being wrapped up in his work as a Hollywood "fixer"). Whether this is a case of woman being even harder on other women than men would be, I leave to others...I think Terrie hits a lacquered nail on the bud, though.

Weird. I just wrote another response here, but it disappeared.

It was along the lines of who hates Megan Draper, who seems mostly admirable, as much as her character is fleshed out (even as Jessica Pare seems starved for the role)...and that some of the resentment of these women characters seems to come from that they attempt to reign in the jackassery of their husbands, when the men's bad behavior is what makes them interesting to many, and heroes to idiots.