How I Came to Write A WIND OF KNIVES


"Becoming through a Wind of Knives,"  Ed Kurtz 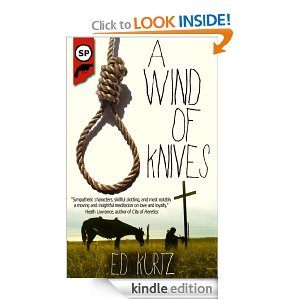 At a recent convention for horror writers, I was frequently asked—as we often do when catching up at such events—what was my most recent published work. As it happened, my new Western novella A Wind of Knives had just been released by Snubnose Press. It’s my first foray into the genre, though not my last, and I was ridiculously excited to talk about it. Of course, I was at a horror convention, so not a few of my colleagues were a bit puzzled.

“You mean it’s a horror-Western?”

Nope. As a matter of fact, it’s a love story. It’s also a revenge narrative, a meditation on loyalty, and did I mention the main character is gay? Hard sell. Lucky for me, Snubnose was up to the challenge. Of course, I get a tad irritated whenever I hear someone refer to A Wind of Knives as a “gay Western”—I can’t help but feel that diminishes the point, pigeonholes it in a way that devalues what I’ve tried to do with the book—but yes, the crime of homosexuality in Civil War era Texas is very much at stake here, and central to the forward motion of the protagonist’s journey. But more than that, more than anything, it is my hope that what I’ve written is a story about love.

I make no bones about being a genre writer; in fact, I’m damned proud of it. I started out in horror, and have since branched out into crime. But I always wanted desperately to write a Western (or 20, time permitting), as it is the most uniquely American form of narrative storytelling. As I’ve said elsewhere, many Western tales are enormous in scope yet at its best the genre is always about character: fascinating characters we get to know in important and intimate ways that give us no choice but to look inward as we join them for their journeys. The journey Daniel Hays undertakes in A Wind of Knives couldn’t be done any other way but under the aegis of this genre, as far as I’m concerned. The story of the American West is a story about becoming, for better and for worse and everything in between. I can’t think of a better template for a character’s inner expedition, and I think you’ll agree.

Besides, I just dig all the horseplay and gunfights. It’s fun, ya’ll.

I haven’t yet decided if we’ll see Daniel Hays, the protagonist from A Wind of Knives, again. Like I said, the genre, and this book in particular, are about becoming. And Daniel is only just beginning to come into himself by the story’s end. His journey (in true Western fashion, I think) is both geographical and deeply internal, yet incomplete. But ain’t life like that?

“There will come a time when you believe everything is finished; that will be the beginning.” ―Louis L'Amour

[A Wind of Knives is available now in ebook from Snubnose Press; paperback forthcoming.]

Yeah, I love a good western myself. I've written a few shorts in that line. Hope yours does well.

Ed - There is definitely something about the western isn't there? I'm not sure what its hold is over our consciousness, but there is one. Not at all surprised that it drew you in as a theme.

Thanks for the kind comments, ya'll! And yes, Margot: the Western is America's mythmaking tool, our culture's way of engineering our creation myth(s), for both better and worse. That's a powerful thing, indeed.