My Town Monday: On the Road: Halifax 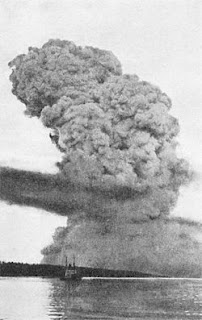 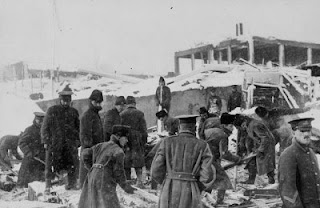 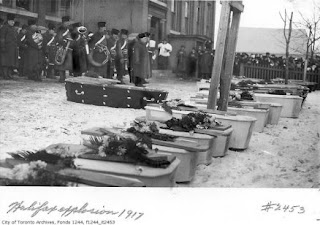 There were so many wonderful things I could say about our trip to Halifax, but, as usually happens for me, one thing dominated our trip. When we came into the downtown section of Halifax, we immediately noticed there were very few older buildings. This surprised us because we knew it to be an old city, dating from the 1700s. When we climbed up the hill to the Halifax Citadel the next day, it became even more apparent. Just a scattering of buildings from before the last century. It didn't take long to discover the reason.

Halifax was devastated, by what became known as The Halifax Explosion, on December 6, 1917 when French munitions ship collided with a ship setting out for Belgium in the narrow section of the Halifax Harbor, the second largest harbor in the world. This man-made explosion was second only to the detonation of the atomic bomb in its scope. About 2000 people died, killed by fires and collapsing buildings and over 9000 were injured. The explosion emptied the harbor of water, creating a tidal wave that raced up the hills of the city. Most of the downtown disappeared and the streets no longer exist. Much damage occurred also in Dartmouth across the harbor.

Since the explosion occurred in the winter, the blast caused stoves, lamps and furnaces to tip or spill, spreading fires throughout the devastation, particularly in Halifax's north end, leaving entire streets on fire. Fuel reserves were high in preparation for the winter. Many people who had survived the blast were trapped in these fires. As firemen from surrounding communities arrived, they were unable to use their equipment, as hoses and hydrants were not standardized. Firemen, soldiers and other volunteers had most of the fires contained by evening miraculously. Some 325 acres of Halifax was destroyed however. Many people who had gathered around the ship either to help or watch were amongst those killed in the blast, or were subsequently hit by the resulting tidal wave. Those who had been watching from the windows of their homes and businesses were either killed instantly or severely injured by the flying glass as their windows shattered inwards.

The following day, the city was ravaged by a blizzard, making futher relief work even more difficult.

I had never heard about this explosion before but the docent at the Halifax Maritime Museum assured me, many Canadians haven't either. Cities built entirely of wood had a habit of burning down. Sometimes it's a cow, sometimes it's two boats.

We loved Halifax and the surrounding area. Consider a trip to Halifax soon.

Check out more My Town Monday posts at the wonderful Travis Erwin's blog: http://traviserwin.blogspot.com/
Posted by pattinase (abbott) at 7:14 AM

Hey, I'm first! You are the most prolific and dedicated MTM'er, Patti.
As always, your post is an interesting one. I had no idea of the history of Halifax. Thanks.

Give me a task and I'm there.

What a horrible disaster! I wonder why so few people know about it.

I'd love to visit Halifax one day.

Thanks for the interesting post... I've learned something new today. Wasn't the cow that burned down Chicago cleared of the charges?!

No, the fire chief had him for dinner.

Oh, wow. I've never heard of that either. Sure, fires have always been common -very city's history is marked with them- but explosions,?

Thanks for stopping by my blog.

I was born in Montreal, and I hadn't heard that story either. Thanks for telling us and have a nice time in Halifax.

Halifax was sensational. Loved it.

That made me laugh:)

Fascinating history that is ripe for the backdrop of a good fiction tale.

My mom was raised in Dartmouth! I love that area. Great post Patti, glad you enjoyed your visit there. It has so much history and yet so little is know about it outside of the province.

I regret that I didn't say more about the rest of it--I do find the one bad event among all the good. Maybe next week because it's just outstanding. A great vacation destination.

Patti, I have been to Halifax and yet, never knew this. I had wondered about the lack of older buildings. Thank you for sharing this information.

1. Robert MacNeill of the MacNeill-Lehrer Report wrote a novel against the background of the Halifax explosion called Burden of Desire. It was okay.

2. Halifax supplies the Boston Christmas Tree every year in gratitude for Boston's help after the explosion.