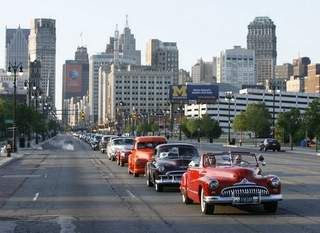 In August 1995, Nelson House and a group of volunteers looked to relive and recreate the nostalgic heydays of the 50s and 60s, when youth, music and Motor City steel roamed Woodward Avenue, America’s first highway. That year, 250,000 people participated—nearly ten times the number expected. The event has grown each year.

Today, the Woodward Dream Cruise is the world’s largest automotive event of its kind, drawing 1.5 million people and 40,000 classic cars each year from around the globe. North American cruisers from California, Georgia, Canada and all points in between travel to Detroit to participate in what has become, for many, an annual rite of summer. Cruising starts on Thursday and ends Saturday night, with Saturday being the official day of the cruise.

The route runs a scant eight miles between Detroit and Pontiac, along one of the most well-traveled and historic roads in the area. This was an area that saw the infamous teenage cruising of the fifties and sixties and food served along the route mimics that era as do many of the cars.

Part of the fun, is watching burnouts, a frequent occurrence with vintage cars that travel only a few miles each year. Another large part of the event are the venders selling food, souvenirs and programs along the route.

Controversies abound, given the inconvenience to the local residents who have considerable trouble getting to their house and out for Saturday errands, the waste of gas, the pollution the cruise causes, the police and other personeel needed to supervise it, the demands it makes on local services in several communities.

But it ain't going away anytime soon. It's clearly a Detroit tradition and here to stay. We're all about cars in the Motor City. So sign up to buy a Volt in 2010 and keep us going.

You know, I had no idea that the Dream Cruse was so... young. I thought it had been going longer than that.

Nice post, Patti. (From someone who reads about the Dream Cruise every year but has only this year actually driven a sliver of Woorward Ave for the first time.)

You know that date has been bothering me too. I'm gonna look it up on another site.

What a great post about a cool event.
Thanks, Patti

The magazine I work for is having a design contest based around the woodward dream cruise. If you took some killer photos, can write a story and lay it all out we are printing the best two-page spread we get in our next issue!

Deadline is in less than two weeks!

It was a great day, my husband grew up in RO and cruised Woodward in the 60s. We went just for an hour of cruising on Saturday, perfect weather:)

Sorry, Jay. I'd love to but I didn't make it there this year. I look forward to seeing the winner though.

It was a perfect day for it, wasn't it?

It looks like a blast. Kinda reminds me of American Graffiti.

Exactly. Except add on 40 years to the ages.

Heard a lot of talk about the decline of the UAW union here at my conference this morning.

The decline of the UAW is tragic. Tt's hard for a union to remain vibrant and strong when the ship itself is going down.

I LOVE the Dream Cruise. My parents live in Huntington Woods, and I've gone every year except maybe 3 years. I love all kinds of classic cars, especially the '57Bel Aire, the 64 1/2 and 65 Mustangs, and the most recent model of Mustang (not a classic, but would be cool to cruise in). My parents cruised Woodward in the 50s and 60s, but didn't meet that way :). Since we moved to Arizona last year, it's one of the few things I really miss about Michigan. I did watch a little of it online this year.

Bill Crider forwarded this to me, and thanks for the memory :). Hopefully we'll come back some summer and enjoy the scent of exhaust in the August summer air :).

Patti-Didn't we meet last year at Megan's talk in Romeo?

Great post Patti. I love old cars and can even remember riding in a few.

Briefly I had a 55 Chevy Bellaire-pink and gray. It always stalled though.

Sounds great! And don't you find the complainers annoying? It's only one day.

Well, it stretches into three or so but still...