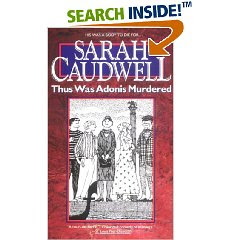 Adrian McKinty is the author of The Dead Yard and Bloomsday Dead. His choice:

The story is narrated by legal academic Hilary Tamar who helps solve the mystery. I'm not going to provide any plot spoilers but I will say that the title tells you pretty much all you need to know at this stage.

Sarah Caudwell (1939 - 2000) was herself a lawyer who lived in , part of the famous English Cockburn clan of journalists, writers and politicians.

Caudwell's prose is like that too. Oh so careful, oh so finely balanced, oh so quietly hilarious. If you like tight plots and clever people and you sometimes wonder why they don't make 'em like His Girl Friday anymore, read Sarah Caudwell and have fun.

Al Tucher writes short fiction for zines such as Muzzleflash. His choice:

In 1988, when was the last war, this tense and intricate thriller satisfied the demands of the genre while ramming home the hideous waste of the war.

Jessie Shapiro, a very appealing protagonist, starts the story sheltered and naïve, but she learns fast. That’s good, because when her ex-husband fails to bring her daughter Kate back from a weekend visit, no one else will believe that anything out of the ordinary has happened. Soviet-American espionage rivalries plausibly find their way into the story, and young Kate may pay the price for events that happened before she was born

Hard Rain is a story about bad choices in a time when there weren’t many good ones. I don’t know of many reasons to recommend going back to that era, but this book is one.

http://davidcranmer.blogspot.com/
Posted by pattinase (abbott) at 8:00 AM

I was wondering why I wasn't getting any hits. The link is for lesabookcriques.

God, that happens every once in a while. I'll try to fix it. It's like one clings to another.