The Detroit Institite of Arts has one of the largest, most significant art collections in the United States. Many of its pieces came in the era of automobile money. Supporting cultural institutions garnered favorable attention for the auto barons.

In 2003, the DIA ranked as the second largest municipally-owned museum in the U.S. with an art collection valued at more than one billion dollars. With over 100 galleries, it now covers 677,000 square feet, a major renovation and expansion project completed in 2007 added 77,000 sq. ft. This new space allows more of its holdings to be on view and allows more hands-on activity.

The museum building itself is beautiful. The original building, designed by Paul Cret is flanked by north and south wings covered with a white marble exterior. It is part of the city's Cultural Center Historic District, across from the main branch of the Detroit Library, adjacent to the College of Creative Arts and part of the Wayne State University campus. Within a few blocks are the Detroit Science Center, the Detroit Historical Museum and the Museum of African-American History.

The DIAs first painting was donated in 1883 and its collection consists of over 65,000 works. The DIA is an encyclopedic museum, not a specialist one: its collections span the globe from ancient Egyptian works to contemporary art.

Much attentions has been paid to making it of interest to children.

The biggest kid-friendly piece is "Eye Spy!," a sort of DIA scavenger hunt with clues scattered throughout most galleries. Conveniently located at 8-year-old height, each of the 53 "Eye Spy!" labels has a riddle that directs children to a detail on a specific work of art in that very room.

In the Native American galleries, one clue, "I'm shiny and small / With bumps down my back / In the wild I grab flies with my tongue," points children at a gold frog on a tombstone from the Chirique culture in Central America.

There are also things kid can actually get their hands on -- like free-standing globes, rather than boring old maps, and "Please Touch Me!" labels. The latter offer children a chance to see what art materials feel like. Or they can "paint" their own Dutch still life on a Velcro board. Books on tables open magically and by a mere touch you can see related topics.

There are also three self-directed gallery guides aimed at adults and children, the most amusing of which is "Yikes!," which takes kids on a museum-wide tour of sinister art.

Other tours include the sports-oriented "Game Day," and a tour of vistas and landscapes through the ages called "Take a Hike."

Friday nights brings families to the museum for hands-on activities, dance, exhibitions and live music. The Detroit Film Theater hosts foreign and independent films in an equisite theater, newly refurbished. Brunch with Bach is another popular feature. The museum is often the site of cultural and civic affairs.
Perhaps the most interesting art for me in the museum are the Rivera murals.

The Detroit Industry fresco cycle in Rivera Court is the finest example of Mexican muralist work in the United States; Rivera considered it the most successful work of his career. In 1932 when Rivera was well known in the United States as one of the leaders of the Mexican muralist movement, he was commissioned by Edsel Ford, president of the Arts Commission as well as of Ford Motor Company, and Dr. William Valentiner, director of the DIA, to create two murals for the museum in its Garden Court.

The north and south walls are devoted to three sets of images: the representation of the races that shape North American culture and make up its work force, the automobile industry, and the other industries of Detroit (medical, pharmaceutical, and chemical). At the bottom of the walls are small panels which depict the sequence of a day in the life of the workers at the Ford River Rouge plant. The central panel of the north wall represents important operations in the production and manufacture of the engine and transmission of the 1932 Ford V8. The major panel of the south wall is devoted to the production of the automobile’s exterior.

(Much of this information comes the DIA website). If you ever visit Detroit, this museum is its number one treasure. 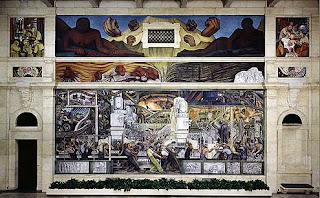 Sounds like a great place and I think it is good they are reaching out to kids.

I want to go now! I haven't been there since I was twelve, and I certainly live close enough to Detroit.

Clair & Stacy. We can all meet for lunch someday. Travis, you too, if you ever get this way.

Can I come for lunch, too, Patti? NE Ohio isn't THAT far....
Interesting post about a great asset to your town.

If I can visit all of you in the cool little towns you live in.

It sounds like a fabulous museum. I'd love to see the Diego Rivera murals. I've never been to Michigan, but maybe I should. Love to see the car museum in Dearborn, too, and the Holland tulips and Mackinac Island.

We do have a number of great treasures. Mackinac Island is one of them, for sure. The Grand Hotel. I must do that. Thanks for reminding me.

I love art, but I wasn't familiar with Fuseli's "The Nightmare" and had to look it up. Definitely creepy. I'd be interested in checking out the museum.

It's a keeper. Let's do lunch.

Patti, Detroit has beautiful places. Now I want to come for a visit to see this wonderful work of art shared with children.

It is wonderful that museums are trending towards more hands on for kids these days. I remember being dragged through some as a child and so badly wanting to touch some of the exhibits.

I would love to see the Rivera murals, they sounds wonderful.

We're gonna have to have a sleepover. Third floor had two bedrooms and a bath. Sign up.