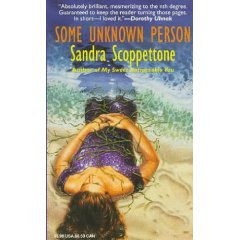 Some Unknown Person
by Sandra Scoppettone

In 1977, when Some Unknown Person was first published, taking risks in a novel was apparently a viable option, maybe because genre writing had not become victim to the inflexible vise that it often is today. An author could still write a novel that steered imaginatively between suspense, thriller, historical fiction, noir, and a literary work.
However you define it though, Some Unknow Person is a page-turner, and isn’t that what we all seek to read in the end?

Some Unknown Person tells the true story of Starr Faithfull, a striking young woman who was found dead on the beach in 1931, and juxtaposes it with the fictional tale of a newly married Italian musician/writer with troubles and father issues of his own. How the two parallel narratives will converge is what we wait anxiously to see throughout this novel. And it’s realized brilliantly in the final pages.

Of great interest to me was the historical detail, also evident in Scoppettone’s more recent work (This Dame For Hire and Too Darn Hot) set in the forties. She paints with delicate strokes, never stepping outside the language and ambiance of the times. Some Unknown Person is a riveting read and highly recommended.

Denise [Deni] Dietz is the author of Eye of Newt, Footprints in the Butter, Fifty Cents For Your Soul, and the Ellie Bernstein/Lt. Peter Miller “diet club” mysteries. Her alter-ego, Mary Ellen Dennis, is the author of the “paranormal history-mystery-romance, The Landlord’s Black-Eyed Daughter. 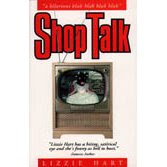 When Patricia asked me to recommend “forgotten books,” two novels immediately came to mind. Both are not easy to find but well worth the search.

SHOP TALK by Lizzie Hart. “Lizzie Hart” is the only-used-once pseudonym of bestselling author Carolyn Haines, and you know you’re in for a treat when the front cover blurb says, “Lizzie Hart has a biting, satirical eye and she’s funny as hell to boot.”

Shop Talk is, without doubt, one of the funniest books I’ve ever read. It was published in 1998 and just thinking about it makes me smile, giggle, chortle, guffaw. Shop Talk’s quirky characters belong to a group called “Writers of Mississippi Books” (WOMB), and the mystery revolves around Marvin Lovelace, ex-CIA agent, a man with a sordid past and a grim view of the future (which includes a dark plot by the CIA to combine human and alien DNA, and that’s not even a spoiler ). But when the dust settles, only one question remains: Which WOMB book will become a bestseller? The historical romance, Forbidden Words? The cheesecake cookbook, De-Lush-Ous? The S&M novel, Leather and Chains? Or perhaps another offering from the Mississippi sleuths…er, writers? 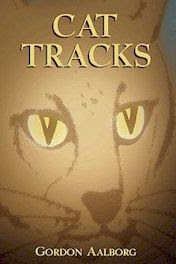 Book #2 is CAT TRACKS by Gordon Aalborg. Published in 2002, Cat Tracks is subtitled “an epic tale of survival.” The feral cat is perhaps the most successful predator in the Australian bush, and Cat Tracks is the story of such a cat, seen partly through the cat’s eyes and partly through the eyes of an old bushman. The amazing thing about this gem of a book is that the author (who must have been a cat in another life) gets into the minds and souls of his characters: Dave Bates, the bushman, and the cat (no name, just “the cat”). This is not a book about a talking cat, or a sleuthing cat, or even a cute cat. It is more along the lines of The Incredible Journey. Here’s a sample: “The arrival of the first proper summer brought a new and easy food source, although the young cat’s mother wouldn’t have approved. Every weekend of warm weather brought increasing numbers of campers who found the cooling waters of the Cotter and the shady sandbanks at Vanity Crossing a veritable godsend after the mugginess of the city. They came in cars, vans, and on motorcycles, but all had one thing in common—they were unbelievably messy. Their departure left behind a rubble of beer and soft-drink cans, along with paper litter in astonishing amounts. And food! Pieces of charred steak, bones from steaks and chops, discarded sausage ends, unfinished sandwiches. The cat learned that it was wisest to be on the scene as the last human visitor departed; otherwise the semi-tame kookaburras and squawking crows would beat him to the spoils.” Fortunately, in 2005 the book came out in large print and that edition is available.

Marc Lecard is the author of Vinnie's Head. 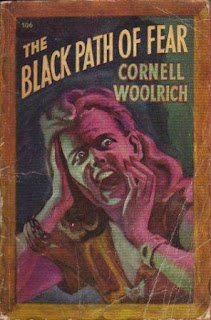 THE BLACK PATH OF FEAR
By Cornell Woolrich (1944)

Titled by Cornell Woolrich with his usual cheerful optimism, The Black Path of Fear is a gem of terror set in prewar Havana. It’s a fine lurid melodrama, with all the little Woolrichian touches that give his stories their unmistakable atmosphere of anxiety and doom.

As the book opens, two lovers arrive at an open-air nightclub in a horse-drawn carriage. It’s not clear to the reader why they’re there, but from their intense, haunted exchanges, it seems they are running away from something or someone. In the crowded nightclub--so crowded that people are pressed up against one another--a roaming photographer stops to take their picture. Just as the flash goes off, the woman collapses. Not sure at first what has happened, the man discovers that the woman has been stabbed to death with a knife with a distinctive handle--a knife he himself had bought earlier that evening.

He is arrested, but talks the cops into taking him to the shop where he had purchased a knife—not the one, he claims, that has done the murder. The shopkeeper remembers it differently, and presents evidence that seems to prove his guilt. The Havana police haul him off.

The man escapes from the cops and flees into Havana’s Chinese quarter. There he encounters a cigar-smoking Cuban girl of the streets who hides him from the police. Holed up in her pitch-black cell of a room, he tells her how he came to be in such a fix:

His name is Bill Scott, a down and outer on the tramp who got a job as a chauffeur with a Miami nightclub owner and crime boss.

One night he is assigned to drive the gangster’s beautiful young wife into town. He is instantly smitten: "I got her by heart between the entrance steps and the car step."

(Only Raymond Chandler throws out so many memorable lines.)

She asks him to stop the car at a spot overlooking the sea:

"She was just looking out there where the water met the sky. That imaginary line that isn’t there when you get to it, but that promises so much to all of us."

Then the woman is murdered, and Scott blamed for her murder.

Having brought us up to present time, Scott and the Cuban woman figure out that whoever knifed his girlfriend is likely to have been seen--and perhaps even photographed--by the roaming photog in the nightclub.

Scott goes out into the night to find the photographer. But he’s too late--the photographer has been kidnapped. Then Scott and the Cubana figure out (using logic, with a generous assist from Woolrichian coincidence) that the Miami gangster’s connection to Havana must be drug smuggling. Guided by an opium addict who conveniently lives next door, Scott infiltrates an opium den, penetrates to its heart, and discovers that it is run by the Chinese shopkeeper who swore he sold him the murder knife. He is the Miami gangster’s opium supplier.

The bad guys discover Scott, drug him and tie him up, taunting him by revealing how the killing was done. But before the bad guys can escape and dump Scott and the photographer in the Gulf of Mexico, the police raid the opium den (tipped off by the Cubana pickpocket) and rescue him.

In the clear now, Scott is freed on his own recog by the Havana police and returns to Florida, breaks into the gangster’s house at night and, in a long, slow, lovingly detailed scene, strangles him in his bed.

There is no one quite like Woolrich. His doomed characters move like sleepwalkers toward the end they see quite clearly. They talk about it, defy it. but they never flinch, and they never stop. This is pure Gothic melodrama, redeemed by keen psychological insight and a tragic sense of life.

All the elements of a classic Woolrich story are present in Black Path of Fear: doomed characters imbued with fatalism, a frantic sense that your dreams are slipping out of your grasp, a desperate attempt to escape the forces that are crushing you, pursuit by mysterious, malevolent, apparently all-powerful adversaries.

A man undone by grief, in a strange country, unjustly accused of murder. With one night to clear his name and escape.

The book closes with Scott back in the Havana nightclub, toasting his murdered love with a daiquiri and contemplating the future. The last line in the book:

"It was lonely, standing by myself at the bar like that."

The Black Path of Fear went through several editions and remained in print up to 1982 or so, and was performed twice as a radio play, Perhaps not top-shelf Woolrich, Black Path of Fear is nevertheless worth looking up. Woolrich can be uneven, but this is a keeper.

Check out these Forgotten Books. (As usual some will appear later in the day)

Steve Lewis
Posted by pattinase (abbott) at 8:00 AM

I will check out Some Unknown Person by Scoppettone. Mixing historical murders with well written mysteries makes for the best of reading.

Just to let you know, I threw my hat into the Friday Forgotten Books ring on my blog starting three weeks ago.

I love this feature, Patti! I've let some time go but will be filing my own "Friday's Forgotten Books" today, too, on Barbara Hambly's "Those Who Hunt the Night."

Thanks, Clea and Paul. I'll get you up.

I must get back to posting for FFB. I love reading all the entries.

Do come back, Barrie. Send me the link any week you have a chance.