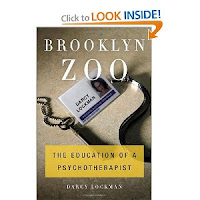 Alison became an actress. moved to L.A., and has been in several TV series over the years. Chris, the editor of the Rutgers Law Review, has a brilliant legal career in Denver with two young sons.

Darcy started out as a free lance writer but felt something was missing. So she went back to school for many years, got a Ph.D. in psychology and became a psychotherapist. This is about her year as a resident at a mental hospital in Brooklyn. She is in practice now full-time, has a darling daughter and another on the way.

How could I ask her to write this herself, but here she is thanks to you tube.
Another book on police psychologists is on the way.

I gave her credit. Our one an only visit to Kings County (to see a relative who shall remain nameless) was pretty scary. This was probably the mid-to-late '70's.

Patti - Wow! Thanks for sharing. I am most 100% definitely going to read this book.

Quite an accomplished family. And this book is pretty much down my own line of work.

I have my copy.

I can only claim motherhood for one of them.