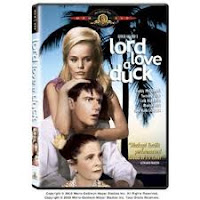 This is one of those crazy movies from the mid-sixties that didn't make much sense but featured Tuesday Weld, who was always fun to watch and lots of music and mid- sixties stuff. This was the sixties that was all fun and games--not the real sixties that came right after.

Roddy McDowell is playing a high school student even though the actor was then in his mid-thirties. The cast is just crazy with Lola Albright, Ruth Gordan and so on. The plot is basically that Roddy is a magician and can get pretty Tuesday whatever her heart desires.

If you want a snapshot of that era, you could do worse than this because it's pretty snappy all told For more movie reviews, see Todd Mason.
Posted by pattinase (abbott) at 7:00 AM

I remember it well. Crazy is the right word, but a nice time capsule.

The first sentence is all you need to say. Tuesday was great. If you want a real time capsule, find a copy of the ancient ROCK, ROCK, ROCK (1956) with a chubby 13 year old Tuesday starring along with Alan Freed, Frankie Lymon & the Teenagers, The Moonglows, The Flamingos, Chuck Berry & others.

Certainly one of my first crushes.

The first thing I remember her in was Thalia Menninger in THE MANY LOVES OF DOBIE GILLIS.

ANother factoid: in ROCK, ROCK, ROCK Tuesday's singing voice was dubbed by Connie Francis. Incidentally, you can get the entire movie on youtube.

This is a fine black comedy, as well...the fun and games have a distinctly grim undercurrent! Sits well between the likes of THE LOVED ONE and PRETTY POISON.

I was going to do PRETTY POISON next.

Loved DOBIE. Can still hear that theme song. Has there ever been a show so much about a boy who loves girls. Where it is his sole preoccupation?

I loved DOBIE, too. I'll watch anything with Tuesday Weld in it.

Wish her career had been longer.

I've never heard of this movie and will check it out.

I was thinking a while ago about how some of the anti-establishment icons (not meant that way, probably) of our youth helped set the stage for the so-called youth revolution of the late 60's: The Three Stooges, Maynard G. Krebs, Soupy Sales, Froggy the Gremlin.

Although I don't much like this movie I was always wild about TW, and always thought she never got the sort of parts that would have made her a major star. Recently I read that Roman Polanski had wanted Weld for the lead in "Rosemary's Baby" but was overruled by the studio, which insisted on Mia Farrow. That role might well have made her into the star she deserved to be.

THE LOVED ONE, PRETTY POISON, LORD LOVE A DUCK. Three movies I thought I was the only one who remembered...Thanks for bringing up all three in a single thread.

You know, Richard Lester would probably have been the right director for LORD LOVE A DUCK. His HARD DAY'S NIGHT has what I think DUCK was after.

I like Tuesday Weld too. What was it about her?

DOBIE GILLIS was regular watching at our house. :)

I think I've seen this, Patti. But it never hurts to be reminded of your past. :)

I saw this so long ago I forget when. I liked it, though, and the theme song wasn't bad. I never hear it on the oldies stations, sorry to say.
Tuesday was, well, too lovely for words. She was also a great comic actress.

Never seen it but it looks and sounds rather cute.
May see if I can find it.

I have not seen this, but isn't this supposed to be some sort of satire rather than just goofy sixties fun?

It was scripted by George Axelrod who's other credits range WILL SUCCESS SPOIL ROCK HUNTER as well as THE MANCHURIAN CANDIDATE, so I suspect this was more than just som A HARD DAY'S NIGHT knockoff.

yes, it is a satire. But seeing it in my teens, that part went right over my head. Mostly I remember Roddy McDowell seeming too old and dancing.

Roddy McDowall was my favorite actor when I was growing up. CONFESSION: When I became an actor in college I stole EVERYTHING from him. If a role required a British accent I did Roddy McDowall's voice. If it required unctuous villainy I did Roddy McDowall in Midnight Lace or The Third Day. If it was impish mischief I did Roddy McDowall in Lord Love a Duck or his turn as Bookworm on "Batman." I even tried to master his nifty trick of raising one eyebrow which I think he might have learned (stolen?) from John Barrymore. For me, he was fascinating in everything he did.

My cousin, who I haven't seen for forty years or more was a dead ringer for McDowall.