My Life at the Theater-THE KILLING OF SISTER GEORGE 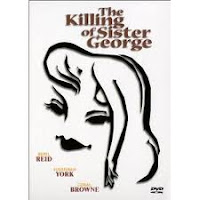 We saw this one in London in 1995. This was not the playbill.

It starred Miriam Margoyles as Sister George, a beloved soap opera character who is about to meet her end. She is also losing her young lover (Serena Evans). The play was written by Frank Marcus and he writes in the bill of the difficulty in mounting a play about lesbians on its first run in the sixties. The word lesbians was never mentioned.

This was not meant to be a tragedy though. It was a black comedy about the irony of a beloved soap opera character being a monster in real life. Sister George is offered a voice over of a cow in recompense. A bit mean that. There is also a film version of this story.

My memory of it is vague--as is so often the case.
Posted by pattinase (abbott) at 5:27 PM

I wonder if there's any link to Van Morrison's drag song, "Madame George?"

". . .say goodbye to Madame George
Dry your eye for Madame George . . ." Or maybe I'm conflating with "Sister Ray" and "Lola" but with lesbians? Anyway, it sounds interesting.

Patti - I've never seen this one. Interesting.....It certainly sounds like an unusual play.

We saw the original production of this one, starring Beryl Reid and Eileen Atkins, back in 1967 or so. It made quite an impression at the time, as you can imagine.