How I Came to Continue a Series: Heath Lowrance 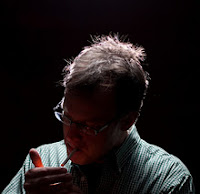 Taking Up the Reins on Someone Else’s Character, Heath Lowrance
Last year, David Cranmer, writer and editor of Beat to a Pulp, donned a disguise, strapped on a six-gun, and became Edward A. Grainger. As Grainger, he wrote a whole slew of fantastic Western action stories, and then gathered them all up into two volumes, THE ADVENTURES OF CASH LARAMIE AND GIDEON MILES, volumes One and Two. Critics and readers ate them up, and for good reason. They were remarkably well-written, full of Western bravado, heart, and keen insight into the human condition. In short, everything you’d want from a good Western story.
Like everyone else, I was quite smitten with Grainger’s work. It was all very far removed from what I did myself, but I never thought of that as relevant. Genre fiction is a big enough territory to play host to all sorts of stories, and all sorts of perspectives.
Toward the end of the year, I did a Western story myself, sort of, called “That Damned Coyote Hill”, a sort of pulp-Western-horror crossbreed that read nothing like a Grainger story. But it lead to an amazing opportunity: the chance to dabble in Grainger’s world.
Grainger put his character Gideon Miles on the table for me, and I snatched it up without a second thought.
Between Cash and Gideon, Gideon was the one I most favored. And I thought that, as well-developed as Cash was, Gideon was still a bit of an enigma. A black U.S. Marshall in the 1880’s, stoic and dedicated, nursing his own private hurts. That’s a lot to work with.
The hardest part, for me, was adapting myself to writing about someone who was actually heroic. That’s something I’d never attempted. In my work, heroes are a rare breed, and even Hawthorne, the protagonist of “That Damned Coyote Hill”, is not a hero in the strictest sense—he’s a raw, violent force of nature who has no problem with shooting an unarmed villain in cold blood. Gideon Miles, however, is an entirely different breed; he’s a man driven by his personal values and dedication to his job. A decent, compassionate lawman who’s characteristics are even more remarkable considering what he has to deal with on a daily basis.
So I wrote a one-page character study of him first, outlining all the things about Gideon I thought were relevant. His decency and compassion, his stoicism, his commitment, his repressed anger. Sent it off to David/Edward, who assured me that I had nailed the character pretty well.
And so I was off. I wrote “Miles to Little Ridge”, a fast-moving actioner that finds our hero (yes, hero… weird, huh?) on the trail of a wanted man who might be innocent, and at odds with a pair of hardcases to boot. I enjoyed the hell out of writing it, and got to actually experience the thrill of writing about an actual good guy for a change.
The reception to “Miles to Little Ridge” was a positive one, which surprised me, frankly, considering that Grainger’s characters have inspired so much love from readers. I was half-convinced that no one would accept them from anyone but Grainger. But I did his readers a disservice there. They read the story with open minds, enjoyed it, and now… my own little contribution to the ongoing legends of Cash Laramie and Gideon Miles is canonical. No lie, that feels pretty damn good.
Other writers are going to be tackling Grainger’s characters in this coming year, so we have a lot to look forward to. And odds are, I’ll pen another Gideon Miles story at some point.
Thanks, David, for letting me play in your sandbox.
Posted by pattinase (abbott) at 9:00 AM

I enjoyed the insights about how it came about and how it felt. Enjoyed your story for sure.

Heath did such a fabulous job with MILES TO LITTLE RIDGE. After reading COYOTE HILL, I knew he was the right author to pen a Gideon Miles adventure.

I love the behind the scenes post here. Thank you, both.