Butch with his henchman, Worm in OUR GANG. Or THE LITTLE RASCALS.

Who are some of the best henchmen in movies? Certain actors specialized in playing the muscle. But sometimes it's a pathway to something better. For instance, Arnold S. played a henchman in Altman's THE LONG GOODBYE. And Martin Landau specialized in them early on (North by Northwest and many TV shows)

Who else? Did Bogart begin as a henchman? Here are some of the best. 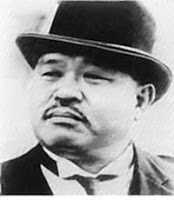 Who did you like most as the muscle?
Posted by pattinase (abbott) at 8:00 AM

Who can ever forget Roman Polanski with his switchblade in Chinatown...

The first name that jumped to mind is someone I know you know well, Patti: Jack Elam. Rarely the actual bad guy, but always a heavy supporting the real bad guy.

Elisha Cook Jr. in THE MALTESE FALCON comes to mind, too.

I remember the Henchman characters but almost never know the names of the actors. It's generally kind of a character roll, I guess. Probably the best remembered for me is Dracula's henchman.

He's the one I always think of first.
Yeah, the actors tend to go unnoticed, don't they. Remembering old TV westerns, the same faces showed up all the time, but their names....

My favorite was probably Butch's henchboy from Little Rascals. His name was Worm and everyone called him Woim.

I guess the droogs from Clockwork Orange were pretty memorable too.

I can't believe you came up with Worm. Now I have to go to you tube and remember him. Wow.
Also I have to figure out who Mike Mazurki is.

Also, Leo Gordon was great muscle. A real-life tough guy and ex-convict, he was making a movie called RIOT IN CELL BLOCK 11 on location in a prison, and all the inmates knew him from when he was locked up there.

Patti, Mike Mazurki was "the Strangler" in NIGHT AND THE CITY. He was also the guy who hired Philip Marlowe (Dick Powell) in MURDER, MY SWEET. He played in countless films over a long career.

For me, it's Robert Shaw playing Donald 'Red' Grant in 'From Russia With Love'.

I guess I am confusing actors and characters here. Thanks, Mike.
Robert Shaw was great at playing anything.

In recent times and for the sheer fun of it, Lucius Malfoy (Jason Isaacs) in HARRY POTTER AND THE CHAMBER OF SECRETS and Johnny Ringo (Michael Biehn) in TOMBSTONE.

Henchmen: can't think of any... maybe Tristan in All Creatures Great and Small? Perhaps I don't really understand what a "henchman" is.

For me, a henchman is the bad guy's enforcer. Someone who does his bidding. There's one in every western, I think.

In the movie The Guard some guys are unloading some dope and the Mark Strong character asks the guy who is overseeing this where he got them from he replies "I put an ad in the paper for henchmen."
I've always wondered where the villians is James Bond movies got these never ending supply of henchmen from.

I can't link to it here but if you go on youtube and look for Mike Mazurki you'll find the incredible fight minute wrestling fight against "Gregorious" in NIGHT AND THE CITY. Mazurki was a professional wrestler before getting into acting.

That should be "five minute"

A couple of great Western henchmen: Roy Barcroft and Robert Wilke. Barcroft was sometimes the main heavy but usually the head henchman. Robert Wilke's the guy who goads James Coburn into the knife vs. gun fight in THE MAGNIFICENT SEVEN.

Iron Mike Mazurki was my first choicce, too. Barcroft and Wilke are also great choices. How about Igor in the Frankenstein movies?

I'm always fond of Elisha Cook, Jr. But what about Peter Lorre, especially in Arsenic and Old Lace? ("Now, Johnny, don't get greedy: you got twelve, they got twelve. The old ladies is just as good as you.")

Peter Lorre scares me to death-I guess it's a combo of his voice, hie eyes-all of it. Cook was great.

Igor yikes! For sure.

I love Jack Elam. He always stood out.

Basil Rathbone as the Nazi in ABOVE SUSPICION.

Lloyd Nolan as the rogue cop in THE LADY IN THE LAKE.