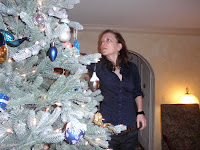 What is the most common thing you do on a second draft of a story?

With me it's to try and simplify the language. I have to get rid of all the high-falluting terms I have used on the first draft. Collapse two sentences into one. Make sure it sounds like real speech and not nineteenth century speech. Greatest piece of writing advice came from Al Guthrie. People don't talk in full sentences. So neither should your characters.

Usually I work through plot problems before finishing the first draft. I rarely move sections around either. My first draft probably is more like three drafts actually.

I always wonder why my impulse is to use big words that don't express something as clearly as a small one.

How about you?
Posted by pattinase (abbott) at 6:52 AM

Very much like you, Patti. I outline at least to the chapter level before I start most times, so there's little, if any, re-arranging to be done. Second drafts are for tightening and removing chaff. Subsequent drafts may work on keeping characters' actions and speech consistent, and making sure descriptions of places and people are the same, but the second draft is pretty much all craft.

Patti - Oh, now this is an interesting question (as all of yours are). Second drafts for me are places to flesh out characters and settings. I tend not to put in enough description (it's my academic background coming out) so in second drafts I add the "flesh" to the "skeleton" I create in the first draft.

I tend to write bare bones first drafts so the second draft is generally a large scale expansion of the original. I start the cutting stuff on the third round.

I agree with Margot and Charles. Second draft is where I put in the stuff I forgot the first time. I find things I need to take out, too, but overall the manuscript usually grows slightly.

Second drafts for me have several purposes--to eliminate traces of false starts, to layer in descriptive detail (which I don't enjoy and have to force myself to do), and make the characters talk more like people.

Talking more like people is a big thing. Now here were are dealing with three people who write mostly novels and I think they can allow their story to grow with each draft. Often I am seeing that perfect word count of either 1000 or 3000-4000 and I am paring down. Cutting out repetitive stuff. Very different process.

I spent many years as a technical writer and do most of the paring down in the first draft. Second drafts for me are clearing up ambiguities spotted by my "editor" and life partner.

I am a sloppy writer. I always have to simplify.

In the second draft, I usually try to even out the tone. If it's first-person, I try to get the narrator's "voice" consistent. Often my first draft is uneven: formal in one spot, colloquial in another; sometimes because my mental picture of the story has changed (darker or lighter).

First draft is usually reasonably tight as I tend to write and edit in an iterative process as I proceed (I'm used to writing quickly and to deadlines and this approach is good for that). Second draft is about continuity, finessing dialogue, catching all the typos, and if anything tightening the narrative rather than fleshing it out. On longer pieces I might add a scene if required. Third drafts are minor tweaks and polishing.

All of the above, plus making sure no one's hair or eyes changed color somewhere along the line.