HOW I CAME TO WRITE ALL THIS STUFF: Eric Beetner 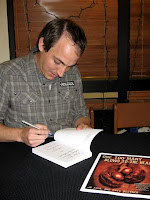 I’ve been told to slow down. I’m not good at it though. See, 2011 turned out to be a prolific year for me. Most years are, you’d just never know it because all the pages in the world, if they are left on my computer – who cares? This year saw several releases and for that I’m grateful and proud.

I should note that it seemed as if all year Patti and I were stalking each other. By the time we finally got our ever-so-brief face time at Bouchercon we’d already been between the covers of several anthologies with a few more still to go.

D*cked, Off The Record, Grimm Tales, Pulp Ink. I have been lucky enough to be invited into all these stellar anthologies alongside Patti and several other top writers I am honored to share a table of contents with. The scariest part of an anthology is wondering what the other writers are going to surround you with, and if your own story will be up to snuff. I had nothing to fear in any of these collections. Every one is a top notch collection.

Pulp Ink has some of the flat-out hardest core crime stories all year. Appropriate since the inspiration was a Tarantino movie. I was beyond thrilled when Nigel Bird handed me the title “Zed’s dead, baby”, and I’m pleased with the story that came from that prompt.

D*cked is the craziest anthology I’ve ever seen and it prompted me to write the craziest story I’ve ever written – one narrated by Dick Cheney’s heart. In an election year the world needs to know about this book.

Off The Record took dozens of classic songs and re-imagined them as crime tales and then gave away all the profits to children’s reading charities. How could I go wrong with California Dreamin’? Of course, my dream is a dark one, despite all the sunshine.

Grimm Tales has been in the works for a while now so no one can accuse us of jumping on the bandwagon of reinventing Grimm Bros. fairy tales in a new genre. The results here are outstanding. My take on Cinderella is one I’ll not be reading to my kids any time soon.

I also had two novellas published this year. Dig Two Graves puts me alongside Patti again in the Snubnose Press stable of writers. With the high bar raised by Monkey Justice and Keith Rawson’s The Chaos We Know, my sordid revenge tale slipped behind the velvet rope and took up residence aside some serious talent.

Dig Two Graves had been sitting around for a while and when Snubnose announced they were throwing their hat in the ring I couldn’t resist sending this nasty little adventure their way. So far the response has been great. My Mother had to stop reading only two pages in. Score one for me, I guess. I warned her.

Split Decision is my entry into the Fight Card series of novellas set in the 1950s. The series is loosely tied together but each is a standalone book written by a different author under the blanket pseudonym Jack Tunney. The two that came before, Felony Fists and The Cutman, were great so I knew I had to be on my game when they invited me to pen an original story. The slate of entries for 2012 is already mighty impressive and I look forward to lining up these books on my shelf as they come in. (Yep, they do have print versions available, with alternate covers and our own names on them too)

So, yeah, a big year. That’s not even mentioning the three novels I completed that still await discovery. So will I slow down in 2012? Doubt it. I’ve been taking a break in December to handle publicity of the books and to sell our house and move. But, the ideas are piling up and I’m getting antsy. I only hope I can have another great year of generous editors, gracious writers and kind readers like I had in 2011.

Labels: How I Came to Write This Book/Story

Patti - Thanks for hosting Eric.

Eric - You really are prolific! I'm so happy for you that you had so much success this past year, and I wish you even more success this coming year.

You're making me feel lazy. Stop being so good at what you do!

I just hope some of this stuff sees the light of day! Thanks everyone. The encouragement of my peers makes it easy to keep going and cranking out those pages.

Sees the light o'day? Gosh Eric ~ you're up the tip, top of a mighty good heap of great readings ... and gleanings, for more always emanates from the beat of a Beetner book or tale.

Hearty Congrats on your terrific prolifics ... and hey man, don't hold back. (Condolences to your scared Ma).

~ Absolutely*Kate, still smilin' at the dodge & weave until you met of you and the amazing Ms Patti. Cool when authors soar all the more . . .