My Life at the Theater-RUMORS 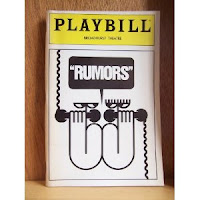 Saw this in 1989 at the Broadhurst Theater on Broadway. It starred Christine Baranski, Ron Leibman, Larry Linville, Jessica Walter, Mark Nelson and others in a laugh-filled farce. The play was by Neil Simon and it was directed by Gene Saks. I can't tell you much more than that there was a lot of doors opening and closing.

I bet Jeff saw this one too.
Posted by pattinase (abbott) at 7:01 PM

Surprisingly, we didn't see it, Patti. I would have sworn we had but my list doesn't lie. We last saw Baranski in the revival of BOEING BOEING with the amazing Mark Rylance.

Patti - Totally forgot that Larry Linville had a solid acting career beyond M*A*S*H. Thanks for the reminder...