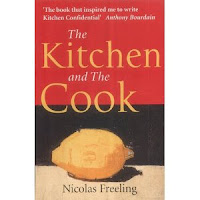 I am taking off Friday, December 23, Friday, December 30th and Friday, January 6th. If anyone wants to collect links, please let me know but.... maybe we could all use a breather. Nearly four years of FFB now. AMAZING!!

Nicolas Freeling, best known for producing some of the finest of modern crime fiction, began his working life as an apprentice cook in a large French hotel. He continued cooking professionally for many years, and his enthusiasm for, and interest in, gastronomy in its broadest sense is at least equal to his passion for crime. Here, reprinted in a single volume, are his two splendid books of gastronomical memoir drawn from those experiences. Each is a delicious blend of the culinary and the literary, and include such recipes as cinnamon lamb stew and bouillabaisse, all charmingly floating about in a consistently entertaining text. The work is illustraited by the witty and winsome pen of John Lawerence, the perfect visual sauce for Freelin's savouries. Funny, wise, full of inspiration and delight, The Kitchen Book & The Cook Book will find a place close to every cook's hearth and heart.

That's from AMAZON not me because....

This is a book I bought for Phil last Christmas, thinking it would be right up his alley. I think it's still sitting on the bookshelf where I placed it then. Too bad. A good lesson. You can't always predict what books will capture someone's fancy. I may read it myself, liking Freeling as much as I do.

Picking out a book for anyone but my son is risky business. He reads it all. A very nice man, my son.


Ed Gorman is the author of BAD MOON RISING and many other novels. You can find him here.

Once again I am late. I'm sorry.

With the passing of my friend Milton T. Burton last week, I am doing again his most recent novel "Nights of the Red Moon."

Late here as well, but mine just went up!

I will collect links on those weeks. People love to do their weekly citations, and I certainly don't mind assembling the lists (though I've been informed recently that some recipients of my lists have been puzzled as to what the lists meant, apparently even as to what hyperlinking is...I've rarely felt so Ahead of the Curve [or at least some curves]). However, I might or might not have time, as sadly of late, to comment much on others' citations.

I may have to read the Nicholas Feeling book, Patti. It sounds like just the sort of thing I'd like to add to my kitchen bookcase collection. :)

Thanks, Todd. I think Kerrie is going to join me for a break. Not sure who else. I am going to be on a plane two of those days so literally can't do it.

I did one, but when I put it up it wasn't Friday yet for you, LOL.

The Holiday break sounds good to me, I've had a hard time getting things (qualifying books) read and written up lately anyway.

Patti, the problem with buying books as a gift is it is often like setting someone up with a blind date. Thank goodness for gift cards, let them find their own next love.

Patti - How very nice of you to include my post in with all of these great 'uns! Thanks!