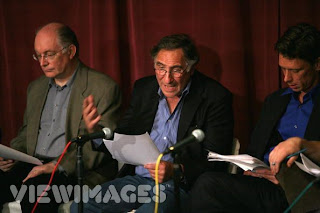 April 10th will be Friday's Forgotten Short Stories. Let me know a few days ahead of time so I can get the links ready. Any genre goes.

FYI-From Todd Mason-Robert Bloch and Fritz Leiber were the two members of the Lovecraft Circle who picked up on what Lovecraft was doing, essentially existential horror, and refined it. They, as much as such colleagues as Shirley Jackson, Cornell Woolrich, and John Collier, revolutionized horror in the 1930s and '40s...they were also techinically better writers than Lovecraft, Bloch soon after he found his own voice, the somewhat older Leiber from jump. For Bloch, such collections as PLEASANT DREAMS and BLOOD RUNS COLD are excellent introductions to his shorter work, as are the two retrospectives THE BEST OF ROBERT BLOCH (most sf and fantasy) and SUCH STUFF AS SCREAMS ARE MADE OF (mostly horror and suspense), published by Ballantine in the latter 1970s...I'm less impressed by THE SELECTED STORIES OF ROBERT BLOCH, which in the paperback edition is ludicrously renamed THE COMPLETE STORIES OF ROBERT BLOCH (not by a long shot, and despite three volumes is missing some of his major work)."The Loved Dead" was by C. M. Eddy.
Posted by pattinase (abbott) at 6:56 PM

You forgot to include with Gary Phillips' name the book he reviewed for The Rap Sheet. It is Donald Goines' DADDY COOL.