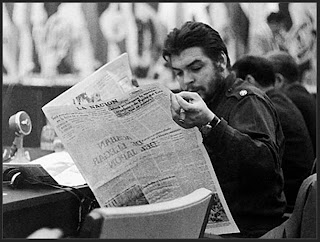 
First what Motown should be about. 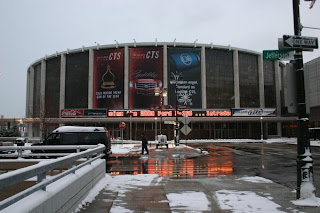 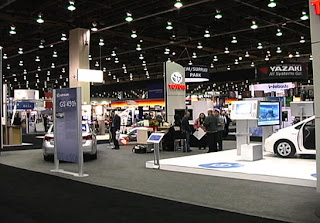 Cobo Hall, officially Cobo Conference/Exhibition Center, is a convention center situated downtown. It and the adjacent Cobo Arena are named for Albert E. Cobo, mayor of Detroit from 1950 to 1957. Designed by Gino Rossetti, both Cobo Hall and Cobo Arena opened in 1960. It underwent a significant expansion in 1989 and presently holds 700,000 square feet (65,030 m²) of exhibition space.

Cobo Hall is the site of most conventions that come to Detroit-the dog show, the boat show, and most importantly, The North American Auto Show every January. It is located in the center of Detroit, if Detroit can be said to have a single center. Just off the Detroit River, near the Joe Louis Arena, at the apex of the freeway system, near the Renaissance Center-- home to GM.

I have been to Cobo Hall once--the first short story I ever wrote won a prize from the North American Auto Dealers and the prize was tickets to the show and publication in their program. I had lived in Detroit for 25 years by then and had never been inside Cobo Hall. It was a dark, cramped, and dreary facility that reminded me of the sixties or seventies architecture-the era of its inception. Ten years on, and it's only worse-leaking, drab, depressing.

It needs a complete renovation but the Detroit mayor and the Detroit City Council are at odds on how to achieve this. The Council wants to keep it in the hands of Detroit despite its inability to pay for it or to even coordinate such a renovation. The mayor, Ken Cockrell, is willing to let a bi-county initiative take charge of the project and facility in order to keep it going. The projected cost, about 300 million. The auto show alone brings many, many millions of dollars into the city.

It looks like the stimulus money cannot be used so if the City Council can't bring itself to turn Cobo over for renovation and ownership, the facility will probably close in the near future. If this isn't a sign of the way things are handled in Detroit, I don't know what is. We will turn down help rather than admit we need it. This was the attitude of Coleman Young in the seventies and eighties and it still permeates Detroit thinking. Similar debates have taken place over the fate of the Detroit Zoo and its premier park Belle Isle.

There is talk of moving the show to Chicago or canceling it altogether. If GM and Chrysler disappear, what's the point of hosting it anyway? Sad news as usual from and for Detroit.

My Town Monday is the brainchild of Travis Erwin.
Posted by pattinase (abbott) at 10:00 PM

Tough times in Motor City. Here in NE Ohio, too. I remain positive and hopeful, though. It is time to re-group and move forward, I think.

This is really sad news. I hope that a resolution shows up sooner rather than later.

I hope they find a way to save Cobo Hall. The renovations they've done here have made a difference for pulling more people into the city.

I hope they wise up!

As someone who has yet to set foot in Detroit, I know Cobo Hall for only one thing: it was the setting for KISS: Alive! (1975). And, if my KISStory is correct, the fans in Detroit inspired the later song "Detroit Rock City." At least there's some good memories attached to Cobo Hall if it doesn't survive.

Down here in Houston, The Summit is now Lakewood Church; the Astrodome is dwarfed by Reliant Stadium and is falling into decay; The Colisieum is gone. They have all been replaced by new-fangled, pristine, sterile places that only the rich can afford to attend regularly. Sad.

Survival seems the by-word for everything these days.

It's a shame the city council is being so hard-headed. The auto show gets national, even world, publicity. How cool that your story won an award, though.

Strangely enough it was about to guys who break into houses-the others all had something to do with cars.
Hard-headed and hard-hearted. The woman leading the charge is a nut-job.

A shame all the way around. Here's hoping things turn around soon.

I hope they decide to admit they need help and get Cobo Hall the renos it needs.

Tough times in the US.

I am fairly certain that if I were to start in on this subject it would rant so all I can say is...Soon enough Cobo will be set down alongside the Train Station as another model of government foresight.

Patti...I am curious though, which side of 8 mile do you reside on? Not that it makes a difference because your affection for the city always comes through.

How sad that a little piece of history may be coming to an end.