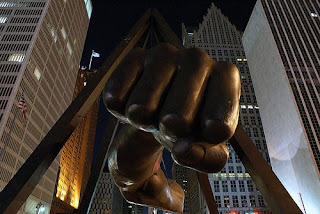 Joe Louis moved to Detroit from Alabama at age ten and considered Detroit his home until his death.

His fist, shown here, has been a piece of controversial artwork from its first appearance in Detroit. Some Detroiters feel it signifies the worst of Detroit--the glorification of violence--while sitting brazenly at its center.

Others find it representative of a city that always fights back--much like the famed boxer.


I used to dislike it but now I find it soothing.

Maybe that's true of any piece of art you see three times a week for many years. It can't help but become prosaic, familiar, part of the landscape.
The monument, (Robert Graham was the artist) is a 24-foot long arm and fist held in balanced suspension from a pyramidal support of bronze poles. Weighing approximately 8,000 lb., it rises 24 feet above a major downtown intersection.
The initial arm was modeled in clay at 14 inches in length. With the aid of a computer, a full-scale steel armature, 24 feet in length, was made and wrapped with wire and covered with clay. The final clay model was divided into eight sections and cast in bronze, then assembled. The pyramid structure was fabricated out of steel, and faced with bronze plates. A tribute to Joe Louis is inscribed on the arm.
This piece of art is at the hub of the city. Do you find it offensive, exciting, provocative, defining?

Here's a video for a 360 degree view.
And don't forget to visit Travis Erwin for more My Town Mondays!
Posted by pattinase (abbott) at 10:00 PM

Art in public places is so important, I think. It is a connection to the arts---where we can see it daily.

I agree with Debra about having art in public places as being important. And I think Joe Louis' Fist is indicative of Detroit's ability to fight back, providing a positive image.

It's a fine monument to a fantastic fighter. I love watching old videos of Joe in his prime.

I think when it comes to Detroit you have to take the good with the bad. Strength with it's misuse, stamina with foolishly staying in the ring past your time. The fist

Always interesting to see what a city will put on display.

From your video, it appears to be inaccessible to foot traffic, which leads me to believe that it is meant to be viewed fleetingly, from occupants in cars driving by.

It is certainly visually arresting.

If it stops to make people think, I am happy. Art is public spaces is sadly lacking in North America as opposed to Europe, and even parts of Asia.

Personally, I am glad to have art up, whether I like it or not. Hopefully it stimulates debate and critical or reflective thought, as you are hoping for.

This year is Detroit's 308th round, the fighter is weary and tired, bloody, beaten and ready to join Joe at Arlington.

The fist is arthritic from the poundings it's taken and given and them that wield it in defiance, foolishly think the past can save them from a future where they are not even contenders anymore.

There is no more controversy over the fist. The only one who wants or cares about it anymore is L. Brooks. He can have it and the tiara.

Hey, I was trying not to write a post like this today, Walking Man.
It's gotta get better soon. Right?

Chris-everything in Detroit is meant to be glimpsed fleetingly. It was built for the car.
Eric-the fist always wins.

I think the fist is great. I used to have a postcard with it on my wall as a teen.

Frankly, I don't like where the fist is displayed or how it is displayed. I go by it every time I go to court which is at least one a week. It sits on a too small island in the middle of a busy intersection hanging from a cement like quadpod with cables that look left over from some abandoned crain. There is no grass around it. Just concrete, asphalt and traffic. The island is so small that there is no room to stand by the fist, let alone read the plaque. We in Detorit could have done so much better for a resident world champion who was known the world over and still is.

Chuck-I totally agree. We pass it on the way into WSU and it seems absurd that they couldn't have placed it in Hart Plaza, at the City Building, Campus Martius or almost anywhere else. On a windy day, I feel it coming toward me.

It seems to be in a very strange location, but having said that, it is a rather interesting piece of art. Were the arm positioned differently it might be more offensive.

Unfortunately a visitor to your city won't know the reasoning behind having a fist suspended at the intersection.

"I used to dislike it but now I find it soothing. "

So often the case ;-)
Aloha

I don't know how long soon is Patti. My most recent cycle of poetry pretty much defines what I currently think about this place. Detroit has ed Michigan down and Michigan led the (leads) the nation in the downward indicators...if we continue to define ourselves by our past performance instead of our present circumstance we will get the expected result.

I am going to link you up ok?

What a very interesting sculpture. I'd prefer to think of it as representing your city's grit. Detroit needs a comeback! It's definitely unique.