I attended a reading by novelist Ralph Freedman on Thursday night. He read from his new novel RUE THE DAY, which tells the story of a man who inadvertently betrays his wife during a HUAC committee examination and that betrayal's aftermath.

Mr. Freedman wrote his first novel in 1948 after emigrating to the US from Germany. RUE THE DAY is his second novel, and in between he wrote biographies of Herman Hesse and Rainer Maria Rilke among other works. He earned a Ph.D and taught at schools such as Princeton. 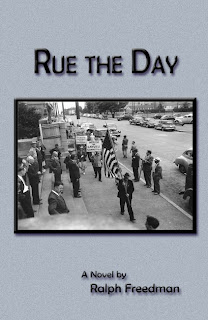 I haven't read the novel yet, but based on his reading, I think it will be a very fine story. But the inspiring thing about the evening, of course, is that a man 89 years old wrote a novel and is on a book tour promoting it. He stood for perhaps thirty minutes reading to the audience in a strong voice and answering questions eagerly. He attended a party afterward and was toasted by an admiring group.

RUE THE DAY is available from Twilight Times Books.

So what has inspired you lately? Who or what gave you a lift?

PS-You hipsters probably already know this site, but I just became aware of it. Interviews with many of the best writers of our time. I was just listening to Donald Westlake. Hat tip to Kathy Cunningham.
Posted by pattinase (abbott) at 12:00 PM

Lana is the main thing that gives me a lift these days.

Without saying, my husband does too. Who else would declare anything I write as great.

I purchased the Father Brown short story collection by G.K. Chesterton and am inspired by his style and further encouraged that one hundred year old tales can still thrill.

This story definitely inspires me. And Scott is the person who really keeps me going when I need a lift. I've been pretty optimistic these days :)

I heard an interview on NPR yesterday with Maeve Binchy who is 69 and has a new book out, HEART & SOUL. I've seen the movie based on her most successful book, CIRCLE OF FRIENDS, and now I'll probably read a couple of her novels. Maeve Binchy sounded as perky as a 20 year old.

My mother adored Maeve Binchy novels. The size of them always puts me off. I like lean books nowadays what with having to read my book club books, which are always long.
Having a family member to inspire you is the best.

I see what you mean about Maeve Binchy writing long books: HEART & SOUL weighs in at 432 pages according to AMAZON. Still, Maeve's reading on NPR hooked me. For short novels, you can't beat the Gold Medals that were published in the Fifties and Sixties: less than 200 pages and filled with action!

I used to love settling in with a long book. Or a long movie. Now it's ninety minutes worth of each. Philip Roth and Bellow both went to thin books in old age. A wise move.

Well, this is the week that the suspension of my relationship with Hub was made public and I have to say I’ve been floored/inspired by the fact that several people that I admire; writers, editors and sundry have made contact to encourage me to keep writing.

In a more general sense, books often give me a lift and I’ve recently discovered William Kennedy’s ‘Albany Cycle’ (which seems to be more of a trilogy and then some other books set in the same place, rather than a continuum) and just adore those. Hadn’t heard of them until Megan and Dennis Lehane started talking about them in reference to ‘Bury Me Deep’ and ‘The Given Day’ respectively.

Patti: if you like lean books (me too, so it’s not just something you switch to at a certain age. I think there’s a real problem with equating length with depth, in literary circles.) do you read/have you checked out the ‘Hard Case Crime’ line? Some very propulsive reads in their backlist.

Gordon-William Kennedy's books are a thing of beauty, aren't they?
I love some of the HCC, especially the Russell Hill one-the name is eluding me, nominated for an Edgar last year. I guess that one was an anomaly though. A bit more poetic and soul-seeing than the majority.
Yes, keep writing. Sorry for the hard times with HUB. Life is a constant kick in the pants, isn't it?

Thanks Patti, the upside is that none of my relationships with writers or publishers seem to have been damaged as a result of the abrupt termination. (I had ‘Crime Scene’ planned for months and publishers have very kindly sent me a lot of books for it.) the better news is that once the situation became public, I was made aware that several places would be open to taking feature length submissions from me.

I’m not sure if I’m supposed/allowed to say where I’m going to be as yet, but I’ll be heading up a Chandler appreciation issue for one magazine and doing a lot of ’Crime Scene’ style features for another. Now, if only I can make this darn thing pay!

It actually took me ages to get through ’Legs‘, the prose was so beautiful (without falling prey to the overwriting that I think someone like Burke does.) I’m actually reading an academic text at the moment about Catholicism and the recent American novel, which has a whole chapter on Kennedy.

You may like Donald Westlake’s ‘361’ (which is available via Hard Case Crime) as well. It’s primarily remembered as the precursor to his ‘Richard Stark’ novels, but that’s somewhat unfair. It’s a stunning meditation on identity politics, the physical/emotional cost of violence and the futility of revenge. All wrapped up, of course, in a tasty narrative about the merits of hitting people.

In all seriousness, it’s easily one of the most thought provoking books I’ve read and,at 200 (or so) pages a pretty slender read.

Anonymous said...
This comment has been removed by a blog administrator.
7:14 PM

Some sort of spam.

Hey ya gots to works with the moments.