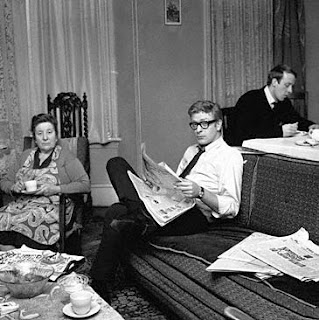 Ed Gorman is the author of many crime and western novels--the latest, SLEEPING DOGS. You can find him right here.

I was looking for something to read yesterday, couldn't find anything that grabbed me so I started looking back through some of my old Stark House bound galleys. Last 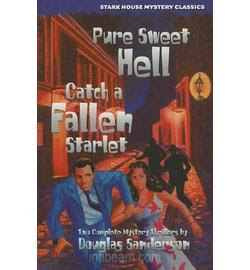 week I read the forthcoming Benjamin Appel pair of novels and they are both Appel at his street best.

I ended up looking at the galleys for Douglas Sanderson's two two-fers. For some reason I don't think I ever got around to reading the second of the two books in the first volume, Catch A Falling Star.

This is a wild melodrama that, in the first ten thousand words, reads almost like middle-period Irwin Shaw. A broken-down screenwriter blamed for the death of his starlet wife--a very nasty lady turned into a martyr by the studio so they could hustle her old pictures. The time period here is the early 1950s when Hollywood was becoming more TV than feature films. The way Sanderson writes--his mourning for the old days--has an edge of true alcoholic remorse for the days that will never come again.

Because he did slap his wife the night she piled up her car and died in its flames...because the studio had spent muy dollars in magazines and tv getting her martyr image out there...he was ousted from Hollywood. He went back East, kept drinking and had a breakdown. We pick him shiortly after he leaves the sanitarium.

This is not a wonderful guy. He pays for his sins in complex bursts of guilt. But even when he feels guilt he can never quite forgive his wife for betraying him again and again. There's a strain of Kenneth Fearing here and it only makes the novel better.

Our man comes back to Hollywood and tries to get a script job. Not much luck (he goes to an old friend, a bawdy female agent who has real power. There's a finely drawn scene when he enters her lobby, all the wanna-bes sitting in chairs praying that she'll see them.) But she can't help him.

By luck a fading macho movie star he once wrote for summons him to the manse. He wants our guy to write a script based on a recent bestseller, an enormous epic that no studio will ever back. This is a Norma Desmond moment--the star, in his forties, wants to play a twenty year old fully capable of derring-do and laying the ladies. Really funny stuff here as our protagonist pretends to be writing this all down and agreeing with him--he needs the money. Fast. Bad.

He goes to his little rented room and starts pounding out ideas. The money the star is dangling is enormous. He decides to drive back to the manse with his ideas. And it is there he finds the star dead on the floor of his study. A lot of people in Hollywood want to see our man suffer the consequences of slapping his wife the night of her death. The cops are all too eager to nail him for the murder.

What follows is a chase through the Hollywood of the Fifties. Sanderson had obviously been there and his comments on the sociology of the time are sharp as the dagger that killed the star.

While the plot gets away from Sanderson a few times and there are moments that are too gaudy for their own good, he constantly writes sentences that are enviable as hell but never self-conscious or pretentious.

This isn't Sanderson's best but I sure did enjoy it.


Clare Langley-Hawthorne, raised in England and Australia, was an attorney in Melbourne before moving to the U.S., where she began her career as a writer. Consequences of Sin and The Serpent and The Scorpion, introduced Ursula Marlow, Oxford graduate, militant suffragette and amateur sleuth. Consequences of Sin, was nominated for the 2008 Sue FederMemorial Historical Mystery Macavity award and both books were IMBA bestsellers. Clare lives in Oakland, California with her family and is currently working on the third book in the series as well as the first in a new series set during the First World War. 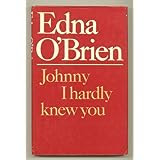 After reading Joan Lingard's fabulous (and probably all but forgotten) book
The Twelfth Day of July set in Belfast, I went through what many teenagers
experience - a phase -only for me it was about Irish history and literature
(I shocked my local library in Melbourne at the raw age of eleven I borrowed
a book of Bobby Sand's poetry written while he was imprisoned in the
infamous Maze prison). When I discovered Edna O'Brien's books a few years
later I became drawn into her stream of Irish consciousness and it still
resonates with me today. One of my favorites of hers is an early work from
the late 1970's, a book called Johnny I hardly knew you, and it's my pick
for 'Friday's Forgotten Books'.
Although it is not a mystery, it is essentially a crime novel, as the story
revolves around Nora who has murdered her young lover, Hart, who was also
her son's best friend. Nora tells the story in flashbacks and fragments from
prison as she grapples to tell the story, to "fathom it, to piece it
together" as she awaits her trial. The book is a lyrical journey through
time and space as much as it is a journey into the psyche and, as with all
of Edna O'Brien's books, her prose reads like poetry - sensuous, visceral
and probing of all aspects of the human condition. The murderous woman in
Johnny I hardly knew you is as much as a victim as she is the perpetrator.
She kills to exact revenge for her own suffering and the betrayals of past
lovers. There is the ex-husband who once pointed a shotgun at her, a father
with an uncontrollable temper and a previous lover who humiliated her.
Throughout the book, Edna O'Brien captures the reader with her evocation of
a woman who is both in search of love and yet caught in a cycle of violence
and despair. Here are the opening lines to Johnny I Hardly Knew You:
For when our passions
Such giddy and uncertain changes breed
So we are never well, till
We are mad indeed.

I think it is Edna O'Brien's uncanny ability to roam through the recesses of
memory, to grope through the confusion of emotions that we all feel, which
gives this story its power as well as its resonance.

I think Forgotten Short Stories is a great idea! I have way too many anthologies that I've been meaning to read....so this would be a welcome opportunity to dig through them and find some lost gems.

I'll second that one! Short stories don't get enough press.

Short Stories would be a interesting change of pace and a bit of a challenge.

Hi Patti, I put Suckers by Anne Billson on my blog as a Forgotten book today- sorry for being confusing!

The short stories idea is great- I've got a cracking one that I re-read recently.

Yes, let's go for FFBs on the shorts.

Todd Mason said...
This comment has been removed by the author.
1:04 PM

Robert Bloch and Fritz Leiber were the two members of the Lovecraft Circle who picked up on what Lovecraft was doing, essentially existential horror, and refined it. They, as much as such colleagues as Shirley Jackson, Cornell Woolrich, and John Collier, revolutionized horror in the 1930s and '40s...they were also techinically better writers than Lovecraft, Bloch soon after he found his own voice, the somewhat older Leiber from jump. For Bloch, such collections as PLEASANT DREAMS and BLOOD RUNS COLD are excellent introductions to his shorter work, as are the two retrospectives THE BEST OF ROBERT BLOCH (most sf and fantasy) and SUCH STUFF AS SCREAMS ARE MADE OF (mostly horror and suspense), published by Ballantine in the latter 1970s...I'm less impressed by THE SELECTED STORIES OF ROBERT BLOCH, which in the paperback edition is ludicrously renamed THE COMPLETE STORIES OF ROBERT BLOCH (not by a long shot, and despite three volumes is missing some of his major work).

Count me in for "Forgotten Short Stories"!

I'm willing to try a post about "forgotten" short stories, though I don't one in mind at the moment ...

I'll do a couple short stories.