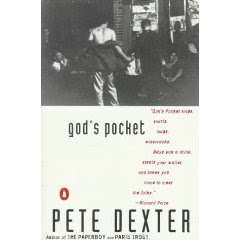 GOD'S POCKET, like all Pete Dexter’s novels, ends sans sunshine. Should Pete ever find a ray at the end, his sales would increase tenfold. I would read them three times instead of twice. I would still marvel at the sentences, at the characterizations, at the overwhelming sense of place, but I wouldn’t feel like my mom forgot my birthday for the third year in a row.

Rereading Dennis Lehane’s Mystic River, I have to believe his spectacular opening twenty years later pays homage to God’s Pocket. Pete was living in South Philadelphia at the time and set the novel where he was, the same way I do mine. No, set is the wrong word, that’s what I do. Drenched or soaked or maybe swallowed does God’s Pocket justice; so lights-out, totally there that I knew this section of South Philadelphia in thirty pages like I know Chicago after fifty years. For my money, these two novels are the Old and New Testament if you want to read or write place as a character, urban America without the apologies or the fashion statements.

Style? The seamlessness of Elmore Leonard at his best, but with the bite of the early masters, the truth between the lines, slowly closing the doors, dimming the lights, walking you down an alley until you’re naked and alone. If they ever find a vaccine for grinding, inevitable hopelessness, it will have been extracted from Pete’s dead-on renditions.

Kris Neri has published more than sixty stories and three novels. Her latest publication is a collection THE ROSE IN THE SNOW: TALES OF MURDER AND MAYHEM. Her latest nove is NEVER DAY DIE. She had been nominated for the Anthony, Agatha and McCavity awards and won the Derringer.


When Patti first asked me to write a review of a forgotten or neglected book, it stunned me to discover I wasn’t sure I could remember any anymore. Sure, like most published authors, I’m always keeping up with what’s coming out now. But that’s not the reason I fear I’ve forgotten the golden oldies. I’m also a bookseller — with my husband, Joe, I own The Well Red Coyote bookstore in Sedona, Arizona. I can’t express how strongly sellers of new books need to be focused on the to-be-published.
But then I looked at my own bookshelves at home, and the books displayed in the most prominent positions. Those are the books I return to again-and-again for my own readings. Suddenly, I went from not remembering a single one, to remembering too many!
I don’t think the book I selected qualifies as forgotten, I’m happy to say. But since there aren’t many copies of Dorothy Gilman’s THE TIGHTROPE WALKER in the major wholesaler warehouses, it sure seems neglected.
I bought my hardcover copy decades ago at the Earthling Bookstore in Santa Barbara, California. I didn’t find it on a shelf, but on the sale table out front, with other shopworn books. I know I bought a stack of sale books that day, but THE TIGHTROPE WALKER is the only one that has moved with me from house to house and also across state lines. Now the tattered dust jacket is gradually disintegrating into literal dust — it looks like paper lace. But it still holds a prominent spot in my library.
THE TIGHTROPE WALKER features Amelia Jones, a sad young woman who finds an alarming note in a hurdy gurdy that has come into her possession. It reads, “They’re going to kill me soon…” and it’s signed by just the first name, Hannah. Alone and terrified herself, Amelia senses the fearful isolation in the note. Soon, this sheltered young orphan sets out in the big, bad world, which she’s largely avoided until then, determined to discover what happened to Hannah.
Along the way she encounters a wider range of personalities than she ever knew existed, finds love, and most importantly, finally faces the darkest episode from her own past. She solves a murder that went unrecognized as a murder, and posthumously brings justice to someone who, through her writing, made a difference in Amelia’s life. She also finds herself.
The title comes from the first paragraph and provides a metaphor for the way Amelia views life at the start of the book. “Sometimes I think we’re all tightrope walkers,” she says, “suspended on a wire two thousand feet in the air, and so long as we never look down we’re okay, but some of us lose momentum and look down for a second and are never quite the same again: we know.”
Especially inventive is the book within a book thread. Amelia discovers that Hannah was the author of her favorite childhood book, THE MAZE IN THE HEART OF THE CASTLE. As we watch Amelia overcome obstacle-after-obstacle, we see MAZE protagonist, Colin, do the same, as his story also provides clues to what happened to Hannah in those final days. Interestingly, THE MAZE IN THE HEART OF THE CASTLE is a real novel for young readers that Gilman published years earlier. (And a copy of that also enjoys a primo spot on my shelves).
Though this charming story, with its engaging protagonist, works as an effective mystery, it’s so much more. THE TIGHTROPE WALKER is really a journey of self-discovery.
It came into my life when I needed to move ahead more boldly and to look at the shadowy corners in my own mind. Amelia’s example helped me to do that. I still re-read it whenever my courage needs a nudge.

Ed Gorman is the author of many marvelous crime and western novels. Try GHOST TOWN if you want to read one of the best.

om his own crimes." Geoffrey O'Brien on Charles Williams

O'Brien's description is apt for virtually all of Williams' paperback originals except one, that being 1954's GO HOME, STRANGER. Here Williams gives us a true hero--named Reno--a true heroine and even a tender brother-sister relationship.
Reno's sister is a famous actress who is accused of murdering her husband in a fit of jealousy. She is being held in a small Gulf Coast jail and is already convicted in the minds of everybody except her attorney and her brother. The novel focuses on Reno's search for the killer who framed his sisters. STRANGER is a good mystery. Williams sets up an almost mythic individual much Graham Greene's Harry Lime--a tirch spoiled psychopath possessed of deadly chamr and animal cunning. Reno believes he's hiding in the swamps that surround the town. Williams' place descriptions are Conradian--pace becomes a character at least as powerful as the human beings. The bayous have never been more sinister. There are three set pieces involving chases through the woods that are among the most vivid action scenes Williams ever wrote. It's interesting to watch Williams work with more convention material than usual. He certainly knew hot to handle it. But I suspect in the course of writing it, he wished he could make Reno at least a bit like his other protagonists, "A curiously amoral fellow fueled by greed and lust."

Paul Brazill was born in Hartlepool, England -a town famous for hanging a monkey-and is now on the lam in Bydgoszcz, Poland (South of Hel). He has stories at Powder Burn Flash, Six Sentences and the book 6S2V plus Flasshots and maybe a couple of other places... His blog is ‘you would say that, wouldn’t you?’ at http://pauldbrazill.blogspot.com 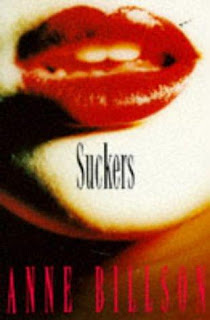 Anne Billson is a John Carpenter and Charles Willeford fan from who writes brilliantly on film for The Guardian, GQ and oodles of other journals. She is the author of Spoilers – a fantastic and essential collection of film reviews. As well as being the best film writer since Pauline Kael she’s also a gem of a storyteller.

Her first novel, Suckers, was one the most refreshing and downright entertaining British novels of the nineties and was shortlisted for Granta's 'Best Young British Novelists' list in 1993.

‘Bleeding London Dry’ was Suckers’ fab tag line and, indeed, the of Suckers,was the Cool Britannia of the eighties, drowning in bright young things. Whole communities were being chewed up and spat out as chic Docklands tower blocks.

The narrator, Dora Vale, is a 'creative consultant' - a typically vapid eighties job description –who visits the headquarters of the uber-voguish Bellini magazine only to discover that it only does its business at night...

No less than Salma Rushdie described it as a satire on the eighties greed is good culture and he wasn’t far wrong but more than that it’s fun. A Molotov cocktail of Ealing Comedy, Hammer and even American Psycho, it’s the best way to spend your time in the company of yuppies- watch them suffer!

I've never read any of Dexter's stuff but you make him sound well worth the search.

My favorite Dexter is The Paperboy. Amazing.

Thing is, Patti, the best horror brings you back to the real world horror...it just might help you cope with it better...

I've nominated your site for a Sisterhood Award. Details can be found at http://pkmadsen.blogspot.com/2009/03/sisterhood-awardwatchmen.html. Thanks for being such a neat place to visit.

Wow, thanks PK. And while I have you here. how about doing a forgotten book?
Todd-I want to be taken away. Somehow unearthly creatures don't seem so scary lately.

Exactly. It's what's behind them...

The day that Pete Dexter writes a happy ending - at least, a *contented* ending - is the day i quit reading.