Norman Price is a short. balding heatlhcare professional lives between the sea, Dartmoor and the English Riviera in Devon. In his childhood he lived next door to one of South London’s most notorious criminal gangs and directly opposite the road where Victorian detective Jack Whicher [The Suspicions of Mr Whicher by Kate Summe 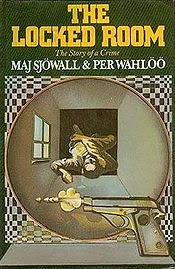 rscale] had lived 120 years before. He now spends his time reading, blogging and eating fish.


THE LOCKED ROOM by Sjowall and Wahloo

My Friday Forgotten book is The Locked Room by the Swedish married couple Maj Sjowall and Per Wahloo, who charmingly wrote their novels in the evenings after they had put their two children to bed. It is not really a forgotten book but is not as well known as some of the others in the classic Martin Beck series. This is a pity because I believe it is one of the series strongest books with both a clever detection puzzle and a lot of humour in contrast to the stereotypical image of the gloomy Nordic novel.

Detective Chief Inspector Martin Beck, head of the National Homicide squad, is recovering from a near fatal bullet wound, and his first case on returning involves the investigation of a suspected suicide found in a locked room. The victim had apparently managed to shoot himself without there being a gun in the room. Needless to say the conduct of the case prior to Martin Beck’s return had been totally negligent.

Meanwhile Beck’s colleagues Kollberg, Ronn and Gunvald Larsson are working on the special bank robbery squad under the command of District Attorney “Bulldozer” Olsson. The incompetence of this accident-prone squad assumes keystone cops proportions, but Olsson remains supremely confident of his own very limited abilities.
The narrative also follows the antics of the bank robbers lead by Werner Roos who are the prime target of Bulldozer Olsson and his merry men. Here there is a touch of irony and a comment on Sweden’s liberal laws in that two of the gang, Malmstrom and Mohren, were under lock and key in the supposedly escape proof prison at Kumla, but failed to return after they were granted a weekend parole.

Roos, Malmstrom and Mohren are planning one huge robbery before they retire to enjoy their ill-gotten gains.

The humour in the book is at times savage and the social commentary could be easily made today about much of Europe. Sometimes you have to shake yourself to remember the book was written in 1973 when Sweden was thought to be a socialist utopia by most people.

“From this ultra modern colossus in the heart of Stockholm the police would extend their tentacles in every direction and hold the dispirited citizens of Sweden in an iron grip. At least some of them.
After all they couldn’t all emigrate or commit suicide.”

While Swedish villains looked at their Europe wide business opportunities.

“Smuggling Danish butter into Italy was amazingly profitable. Moreover it was virtually legal; it’s only real risk lay in the possibility of being liquidated by the Mafia……..”

There is a wonderful contrast between Martin Beck’s lonely meticulous detection process and the incompetent blundering waste of massive resources by Bulldozer Olsson that makes this a novel not to be missed.
The Martin Beck books were the inspiration for all the Scandinavian crime fiction that has followed including Henning Mankell, and the latest best seller Stieg Larsson. 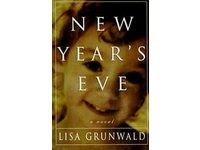 
I’m a crime writer, but it’s no murder mystery or thriller that has stayed with me all these years. The book I can’t forget is New Year’s Eve by Lisa Grunwald. It was first published in 1996 and I read it when it came out in paperback two years later, but I still think about the two sisters and the divergent ways they deal with their lives and their grief.

Pregnant twin sisters and deliver their babies soon after New Years Eve, and raise their toddlers together. When Heather’s son David dies in an accident, Erica’s three-year old daughter begins to see his ghost. Heather is comforted by this, but Erica is totally freaked out.

It is not a ghost story, but an argument about the different ways we all cope with loss, why some of us turn to religion or the supernatural, and why some of us stick to the cold, hard, facts.

It’s also about mothering, sisterhood, family dynamics and the comfort we all need to get through life. It’s one of the best novels I’ve ever read, and I still can’t figure out why no one made it into a film.

The characters and family tensions are deep and richly drawn, and the story moves. The only thing I don’t love about this book is the title. New Year’s Eve. Although its central to the story – big events and family memories are focused on New Year’s Eve – I think the connotations of that celebration may seem trivial compared to the import of the story.


Eric Peterson is a wannabe writer, living in Michigan, working a day job and is always on the lookout for the Great Old Ones to show up at his job. He's on the web at www.restlesskind.blogspot.com

I think at this point we all know that there is little virtue in the corporate world, that the grind of the Dilbert world is the modern slave pit for too many modern m 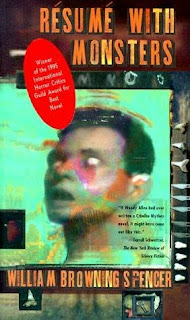 en and women. William Browning Spencer explores the modern Office Space world with his tale of a lowly worker, a Morlock if you will, Philip Kenan and his last chance job at Ralph's One-Day Resumes. The only problem is that his last job and last girlfriend were lost when a couple of creatures out of a HP Lovecraft Mythos tale showed up and wrecked the place. Now not only is Philip holding onto his job by a string, but his sanity as well. Philip is also writing his cyclopean (sorry I had to find a way to use that word) tome (that one as well) titled "The Despicable Quest" hoping that it will be his ticket to big league of Sci Fi/ Horror Star-Dumb, all the while on the lookout for the reemergence of the Great Old Ones that destroyed his previous life. The book is funny, surreal and satirical. I don't recall exactly how I stumbled across the book, but I noted inside the front cover that I wrote "8-31-96" which was the end of my first summer out of college and working my first full time minimum wage job, and wondering what evil powers were keeping me from finding rewarding work that paid well and satisfied my artistic need. I guess the Great Old Ones were as good an answer as anything else.

More great finds! Too many books out there---and it's a wonderful thing. I posted on John D. MacDonald's CRY HARD CRY FAST this week.

Cullen is right. I'm finding out hints of all kinds of books I'd probably like but man where is there time to read them all. My reading schedule is basically full from now till Armageddon.

I ditto Charles and Cullen. I have a bookcase, upper and lower filled with books I've had for two years and not touched yet. Now with money tight I have something to read for the next year or so without going to the library or bookstore.

It has been ages since I last thought of Resume with Monsters.

Thanks for bringing to my attention!

I am going to have to dig up my copy.