The Keeping of Books 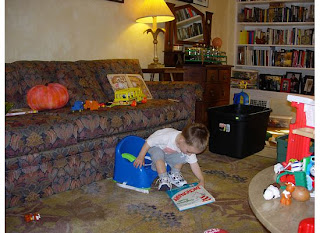 
The back page of the NYTBR had a piece this week on the problem of keeping books.

How do you decide what to keep and what to discard, especially in the era of Internet? Why keep what is on the Internet for the asking?

It's a constant concern of ours, wondering if the floors and walls of a 90 year old house can take such abuse. My husband has many thousands of scholarly books that he probably will never open again. And I, well I have my stuff. Like the poetry collection I accumulated when I thought I might write poetry. Or the quilting books from when I took that up. Or the ones on jazz, cookbooks, criticism, artbooks. And the fiction. Mostly the fiction.

I have the proverbial TBR pile, which threatens to bring down our bedroom and several other storage areas. The largest category I keep are the books I love, but will probably never read again. At 35, I could tell myself I would reread Richard Ford, Russell Banks, Josephine Tey, Margaret Millar.

Do I hang on to a tattered copy of The Scarlet Letter from high school? The travel books from the places we've been? Do I define myself by the books I own?

How do you determine what to keep and what to pass on to the used book sale ? Do you have inviolate collections that you would never part with, a second group that might need weeding, a third group that you just feel no affinity for and would toss in a second should the energy arrive?

Or do you just keep buying without much thought to any of this. Ah, youth.
Posted by pattinase (abbott) at 9:00 AM

There are certain authors I wouldn't part with for anything even though I might never read those copies again.
Most of the stuff I would get rid of are things I took a chance on and, while I might have liked them, just not enough to buy more by the same author.
I have a lot of those. Like most readers, I cling to them, for whatever reason, far longer than I should.
Years ago, when the house was being taken over, I had to start making choices. One of the first things that had to go was my comic book collection from my youth. I never bought them with an idea of investment, just a love of the books and characters.I rarely buy comics these days.
Next I went through my books and, reluctantly, parted with a great deal of them.
The thing that prevents me from winnowing my books these days is my disability. I'm just not able to do it anymore.

I read an article a few years ago about a man who decided to just keep what could fit in one good-sized book case. It was easier to get rid of almost everything than some midway expulsion. But living in a bookless house would be pretty depressing.

So far I tend to only part with "extra" copies of books, or with books I get for free that I know I'll never read. I also sometimes part with older paperbacks when I get a hardback copy of something. I just can't hardly get rid of books. Even if I know I'll never read it again, I think to myself that I might some day want to refer to it.

My wife and I just unloaded a few titles on our local used book center. Many of my choices were pretentious affairs from my college days: Derrida, Foucault, etc. Not saying that stuff isn't valid, but am saying who the hell cares about "postmodernism" anymore? LOL

For every book we give away, we seem to buy a new one. Maybe it's something we will read instead of something we did or won't, but we're not making progress. Which reminds me that bio on the Collier Brothers has been sitting on my shelf for a long time.

I tend to buy more than I give away. As I look above my desk in my home office, I see two shelves of large sports reference books that I never look at. They could go. To my right is the Oxford Canadian Dictionary that I use plus several style books. They are keepers. I also have six shelves filled with books on books and writing plus oversize collections on comics and magazines such as Playboy, Esquire and Vanity Fair. All could go and not be missed. Behind is a journalism section that fills six large shelves and overflows onto the floor. I also have a folding bookshlef is primarily is filled with recent purchases. On the top of my credenza and on the floor are nine stor-all boxes full of books that I will either sell or donate. And one pile on the floor includes about a dozen ACE science fiction doubles that I bought the other day. And I don't read science fiction. Please help as I haven't written about the other rooms in my house or the basement and garage filled with books. Where do I start?

That's the thing, we have two-walls of books in the living room, plus a boocase, a bookcase in the dining room, the bedroom, the TV room, both studies have walls full of books and two bookcase in the attic. Plus what we have in our offices at work. We need HELP, too.

Is it legal to get rid of books? :) Heck, I even keep all of my multiple copies. (But it has a different cover!)

It's legal if you promise to replace it with two.

I'm facing this dilemma myself, as my office is now so crowded with books the dust bunnies are stoop shouldered. (There's obviously no roon to run a vacuum cleaner, as I regularly tell the Spousal Equivalent.) About 40 books left last month, and more hard decisions were at hand, until I remembered The Sole Heir will be off to college next fall. Now I sneak quick looks at corners and the closet, thinking, "A small shelf here should be good for fifty or so paperbacks..."

Well, there's always the attic. She'd have to come back throuhg the ceiling to use the bathroom, but sometimes sacrifices have to be made.

My books are kept in a bookcase with a slight overflowing into other areas. I recycle mine on a semi-regular basis: purchase and donate. The books I haven't read are waiting for when I get to them. Over a third of my books are research material for my manuscripts and these will be kept until their use is over.

I have my favourite authors of books which I do re-read just for the pleasure of going over a special moment. In 'Drums of Autumn' by Diana Gabaldon there is a scene where one of the characters, Brianna, meets her father for the first time and his reaction to this meeting. These favoured books will probably stay forever.

I'm like Charles in that if I acquire a hardcover, the paperback goes.