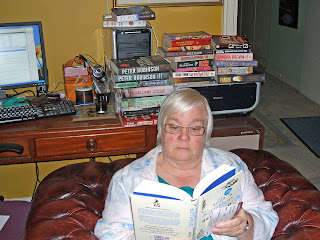 
Trey Barker --In the last fourteen years, my short fiction has been seen pretty much everywhere. I've written everything from crime to mystery, horror to science fiction, mainstream, westerns, the odd love poem or two, a play, and hundreds of non-fiction articles. My first novel, "2000 Miles to Open Road," came out a couple years ago, and you can still find my short collection ("Where The Southern Cross the Dog") and my short novel ("Veil of the Soul") if you look hard enough. I used to be a reporter and now I'm a cop, patrolling the roads for the Bureau County (IL) Sheriff's Office

THE CHURCH OF THE DEAD GIRLS, by Stephen Dobyns

There are certain literary memories that are indelible: ‘Katy and the Big Snow,’ the first book I ever checked out by myself from the Anson Jones Elementary School Library; ‘The Shining,’ which first made a restless 7th grader want to write; ‘The Grifters,’ which left a beginning writer sweetly exhausted from Thompson’s literary speed and muscle.

And THE CHURCH OF THE DEAD GIRLS which left me in absolute awe of the written word.

I had been seduced by language before, but never with so much depth. The prose was as gentle and lush as the continuous, soft waves of a lake rather than the pounding surf of the ocean.

But at the same time, it was the language's very gentleness that built to a razor's edge. I believe to this day that part of what drew me so intensely to the book was that poetic language could run in such stark contrast to the subject matter.

Strong stuff, indeed. Maybe Dobyns’ book is a thriller, maybe a mystery. It could be literary horror and it could be reportage in the sense that it lays open small town America. But the label doesn’t matter. Call it whatever you want. Hell, call it a high school biology teacher's call to arms, for all I care...just make sure you read this book.

There is a great line that’s been repeated in just about every review the book ever got and I’ll repeat it: “It is dreadful not to be allowed to have secrets. Years ago I happened to uncover a nest of baby moles in the backyard and I watched them writhe miserably in the sunlight. We were like that."

Ah.... It is the very air of great literary art. Breathe some and you'll be a better person for it.

Kaye Barley is a long time reader of most anything and a fairly new blogger also of most anything (http://meanderingsandmuses.blogspot.com/). She lives in the beautiful North Carolina mountains with her handsome husband of 22 years, Donald, and their faithful companion, Harley Doodle Barley - the cutest Corgi on God's green earth.

Cormac Brown" is my pen name. I'm an up-and-slumming writer in the city of Saint Francis and I'm following in the footsteps of Hammett...minus the TB and working for the Pinkerton Agency. Some of my stories have appeared in Flashing In The Gutters and you can find my work in Powder Burn Flash as well as Six Sentences. My story "Tit-For-Tat" appeared in the premiere issue of Astonishing Adventures Magazine and I have two stories coming up in the next two issues of that magazine.

"A conscience is a luxury no private dick can afford."

Before "Hammer" became the detective name most synonymous with "Mike"

and way before Horatio Caine perpendicularly sidled up to people to pelt them with bad puns and clichés, there was another Mike that had the red-headed crime fighting market cornered, Mike Shayne.

This book was given to me by a friend and "Heads You Lose" is a reprint of the 1943 story "Blood On The Black Market." This was the eighth Mike Shayne story to be printed, according to the Brett Halliday forward. So in a sense, the 1950's cover can throw a reader's expectations off, though not me, I read it with open mind in terms of wanting to soak up the era.
The history buff/dilettante in me feasted on all the details of WWII black outs, gas rationing, the old speed limits (which would've drove me out of my skull, 35 mph on Florida's highways???) and black marketeers.

Mike Shayne likes a sip of cognac...or four and he tugs his earlobe in this book, almost as many times as Carol Burnett typically did in one season. You can see Dashiell Hammett's influence on Halliday. Shayne puts the booze away like Nick and Nora did, though unlike them, he didn't have quite as many quips, bon mots, and he was lacking a dog. He made moves on one character's wife while that character was still in the room, just like Ned Beaumont. And Shayne tried to pit good and evil against each other...though he didn't manage with quite the same finesse as Ned did.

In this book, the Miami Dade Police Department sure has absolutely no reservations about drinking while on the job. Everybody in this book seems to have a two cigarette pack-a-day habit. Bad editing strikes again! Cointreau is not wine, mon Dieu!

My second favorite bit of dialogue is...

"You're a fool," she said drearily. "We could have had so much, but you're afraid to believe in anything. You're cursed with the need to look beneath the surface for a hidden motive. I feel sorry for you."

Shayne's laugh was sardonic. "Hidden motives are my meat," he confessed.

Kieran Shea was born and raised in New Jersey. His crime fiction has appeared in THUGLIT, PULP PUSHER, DOGMATIKA, MUZZLE FLASH, PLOTS WITH GUNS and DEMOLITION. He takes his coffee black and lives outside of Annapolis. MD. 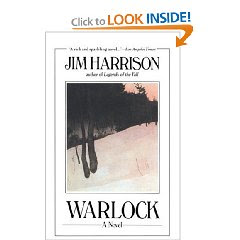 If one is new to Harrison's work, this tightly-paced tale of intrigue is a quirky and hilarious introduction to the man who, I think, defines the last shreds of American wilderness in modern fiction.

It's also sort of a crime novel.

The main character, Lundgren, is a bit of a macho buffoon--an unemployed whip-smart, non-profit professional who takes a gig serving as a debrouillard/trobleshooter for a wealthy physician. After giving himself a code name "Warlock," Lundgren takes on all comers like a freshly-minted gumshoe--whether it's doing battle with redneck logging interlopers or spying on his employer's wife and son in Key West's underbelly--Lungren is an affable hero.

The novel is also a great introduction into Harrison's passion for fine food, literature, the outdoors and assorted prurient diversions.

I gave this book away to someone and next to his novella "The Man Who Gave Up His Name," this is my favorite Harrison work.

Patti, I did Border Guns by Eugene Cunningham on Monday that will fit into today's forgotten books.

"Blood on the Black Market" was one of the best Mike Shayne mysteries. And I believe his wife (Phyllis?) dies in it. I remember it as being one of the more serious novels that the Miami P.I. appeared in.

I want to get ahold of some of those Mike Shayne books.

I'd never heard of Mike Shayne before today but he sounds like my mug of slosh.Indeed.