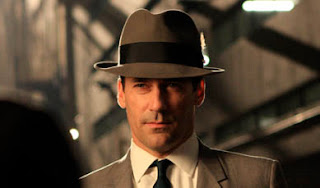 It is only when I read a comprehensive analysis such as this one (recommended by Wallace Stroby on his blog today) that I realize just how many subtle references in Mad Men slip by me. Some of them are offered at the speed of light, like Betty Draper's choice of reading matter as she falls entirely apart (Ship of Fools by Katherine Porter).

What makes Mad Men great is the need for the viewer to intuit or decipher what Betty's up to. What any of them are up to. It's rarely spelled out because the characters all seem to act without discussion and in isolation. Such confiding is actually scorned, especially with men. Being a "real" man then was especially difficult.

I think people of my generation (baby boomers) are not used to watching television carefully enough to pick up rapid-fire allusions such as those tossed out of Mad Men, The Shield, The Wire. It requires a deep focus that we never had to extend to television. I used to read a book while watching TV, for Pete's sake. It was the book that required the attention.

Similarly I remember the struggle my parents' generation had with watching movies that were not chronological in their story-telling. They needed to learn a new language as I do now.

I need to learn how to watch TV again. I may pick up overt visual hints (product placement and that sort of referencing), but the more subtle visual and audio allusions are getting away from me. Do you notice this, baby boomers?
Posted by pattinase (abbott) at 10:24 AM

OK, Patti, is this why I can't get into MADMEN? I don't think so, because I'm a fan of Japanese movies and so much there is subtext/what it not said. Perhaps this is a series that you can't enter in from the middle. Help me to understand,

To let you know I just picked up Die A little in my local Borders. Never judge a book by the cover they say but I was attracted to this book by the wonderful pulp style cover. I'll review it soon on my blog.

I think it was difficult to get into Mad Men right from the start because the characters are so aloof and stylized, the storyline like gossamer. Even the characters who seem to be of a higher moral character (Peggy, for example and Don Draper at times)are remote and obfuscated most of the time. I think you have to like that about it. You have to want to struggle to understand them and even then, since there are so many characters, most will remain enigmatic. I am mesmerized and frustrated by most episodes.
Revolutionary Road by Richard Yates had the same qualities. Interesting to see what they do with the movie. DiCaprio seems too young.

It's when you can understand why LIFE and JOURNEYMAN are great television, without the portentousness of MAD MEN (which does have a fine hand with small cruelties and resentful incomprehension) that you've actually cracked it. Lots of US tv helps, Naomi...but there are lots of people who treated tv as solely bubblegum, and like it that way, or TWO AND A HALF MEN and GRAY'S ANATOMY, to say nothing of the backstabbing game shows, wouldn't do as well as they do.

Just don't see LIFE as being anything more than the usual fare but I'll give it another try. I do get tired of crime shows, as strange as that might sound. There is more to dramatize than crime and hospital shows. MAD MEN tries to find the pain in ordinary people.

Except to the extent that ordinary people don't assume the identities of dead fellow soldiers and drive their desperate brothers to suicide, at least not too often...MAD MEN has mostly avoided blatant melodrama, but gets awfully close to soap. LIFE's season premiere sadly won't convince too many people of its quality, since the foreground story was slight and somewhat hackneyed, but it's how the show handles its themes and how the characters are drawn that makes it a very good show trembling on the verge of better.

Don't force yourself with LIFE, of course, but it, like NUMB3RS, is a series bring somewhat more to the table than the likes of CSI: MIAMI.

I DVRd it. Draper's story is over the top, but the rest of them are more conventional.

I don't know, I loved "Mad Men" right from the start. It was so over-the-top that it made me laugh out loud (and, yes, always watch what the characters are reading). I found the Peggy/pregnancy a bit over the top, but hey, I'll give them one. But "The Wire"? That was just brilliant writing, pure and simple. Note perfect, utterly believable characters. Here at chez Musetta, we'd watch it twice each week - once "on demand" on Monday, then again on the Sunday broadcast - to make sure we caught every bit of the Baltimore dialect. The last season limped a bit, but overall a brilliant run.

I, too, have done the reading by the tv. But great writing compells your attention, on screen or page.

Season 4 of The Wire is my favorite.