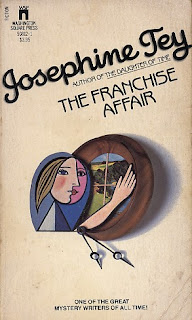 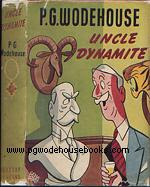 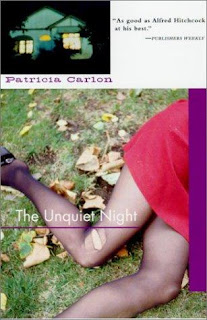 With heartfelt thanks to Clair Dickson who found a way to blindside blogger. Any typos are mine because I had to retype all of it.

Patrick Balester is the author of In the Dismal Swamp. You can find him at Picks by Pat.

The Unquiet Night by Patricia Carlon

The Unquiet Night by Patricia Carlon was originally published in the 1960s in Great Britain. Available in the U.S. only in the past few years, the novels of Patricia Carlon are still virtually unknown here. Yet she wrote some of the most suspenseful novels ever to come out of Australia and this may be her finest work.

“He hadn’t meant her to die.” With that opening sentence, we are drawn into the world of Mart Deeford, a young man with a violent temper who strangles a pickup date in a small park on a late Sunday afternoon.

Convinced he can be identified by a woman he sees in the park after the crime, Mart begins to hunt for her and the young girl. He poses as a shopkeeper who needs to find a girl with ponytails who left a parcel in his store. By taking advantage of other people’s good nature and eager desire to help, he eventually tracks down the woman, Rachel Penghill, who is oblivious to the danger she faces until it’s too late. He tricks Rachel into opening her door, and then leaves her entombed in a vault in her small shop. It is only then that we begin to feel the slow terror grow as Rachel realizes that she has been victimized not by a thief, but by a murderer. As the air is consumed, the tension mounts.

Her only hope is to be missed, yet as the night turns into day, repairmen, milkmen and friends move across her threshold, only to step back before they can discover that Rachel has not gone to a jewelry convention in another town, but is gasping for breath just a few yards away. She begins to realize just how isolated her existences has become, and the nosy friends and neighbors she has pushed away become ironically important.

This novel will keep you guessing until the last page. I highly recommend it, and hope more readers will be as thrilled as I was to discover the work of Patricia Carlon.

Charles Benoit is the author of Noble Lives, Relative Danger, and Out of Order

You can thank me later.

Louise Penny is the author of the forthcoming THE MURDER STONE, Book 4 in the Armand Gamache mysteries, which began with the award-winning STILL LIFE.


I'm not totally convinced she's been forgotten - I sure hope she hasn't.
But this is my small contribution to helping spread the word. For many
years my favorite Tey book was the remarkable, The Daughter of Time.
Infact, I was resistant to reading The Franchise Affair - perhaps out of a
misguided sense of fidelity to The Daughter of Time. I didn't want to be
seen playing footsy with another one of Tey's creations. Or, more likely,
it was the ridiculous title. The Franchise Affair? I ask you. It sounds
like love among the french fries, or groping in the donuts.

Instead, when I finally succumbed and read The Franchise Affair I was
treated to what I now believe is the best mystery of all time. My heart was
quite stolen.

There's no body, no murder in The Franchise Affair, though it is based on
the 18th century case of Elizabeth Canning. Like all of Josephine Tey's
books it's about appearances vs reality. Perceptions and manipulation.
Duality. What else drives a really great mystery? Not blood, not a body -
but what's eating away at the marrow. Our deepest selves, hidden, masked.
Then agonizingly revealed.

On the surface The Franchise Affair is about a fresh-faced young woman,
barely more than a girl, who accuses an elderly woman and her spinster
daughter of kidnapping and holding her in their dreary old home on the edge
of the village.

Like all of Tey's works this one is short, almost novella length. And
crystalline in its clarity. It is, in short, brilliant. Disturbing, witty,
sightful. And more horrific than any body count could ever achieve.

Josephine Tey - a pen-name for Elizabeth MacKintosh - wrote all 6 of her
mysteries between 1947 and 1952. Then she died, in her mid-50's. Almost
nothing is known of the woman. No photograph exists of her. Like her
books, she's a mystery. A real woman lurking behind a made-up one. But I
have happily given my heart to her.