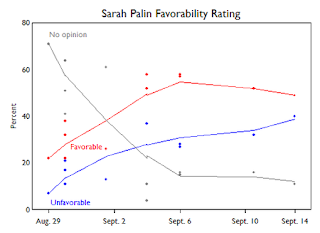 Here is a place to fact-check various questions about the candidates.

This data and words is from
the Monkey Cage and John Sides at GWU).

Sarah Palin Favorability Ratings
Out of curiosity, I made this graph of Palin’s favorability ratings (data here, here, and here; this may not be exhaustive):

This is a nice lesson — e.g., for an undergraduate class — in the process of “opinionation,” where a large fraction of the public suddenly acquires an opinion.

In the last week, Palin’s favorability rating has, well, paled. This demonstrates the consequences of a highly visible campaign: it is difficult for any Republican or Democrat candidate to command sustained attention without attracting roughly equal proportions of detractors and admirers. In a September 4 Rasmussen poll, Palin’s favorability was 1 point higher than McCain’s or Obama’s. Nine days later, according to a Sept. 13 poll by Daily Kos, it is slightly lower than theirs (49% vs. 55%; however, given the margin of error, it isn’t conclusively lower).

Rather than just looking at the change in "total positive," look at the numbers for "net positive." That is, the difference between the positive and negative impression she makes.

Last Thursday, Sarah Palin was on her third straight day of enjoying a 52% favorable / 35% unfavorable rating, but according to daily tracking polls, that 17-point net positive rating has dropped every day since then. And today, she's down to a meager 4-point net positive (47% favorable / 43% unfavorable) -- definitively worse than any other candidate in the race (Obama, McCain or Biden). Her slide can be seen in McCain's favorability as well, where his net positive number has fallen from +13 to +6 in the same time span.

The bloom is off the rose.

And with the news out today about that inquiry I think it's only going to get worse for Palin, and rightly so. She won't answer questions to the press, to investigators, or anyone else.

Do people in this country really want another politician who doesn't feel they have to answer to anyone? Sounds to me like what we've already got.

I will never get the line "And I can see Russia from my window" out of my head. I have to assume it hit others the same way. Tina Fey's uncanny take on "Sarah Palin" may have saved us.

I'm glad in your last sentence, you injected the word most. I'm one of those Republicans that is horrified by Palin and not afraid to say it.
I've been a registered Republican for forty years, but have never been a GOP-come hell or high water-voter. I've always tried to decide who was best, though I have been wrong before.
It's been embarrassing in the last eight years to admit being Republican. The far right seems to be the only ones who like the Karl Rove plan of attack. Lie, Lie, and when you're caught at it, shrug and tell another lie.
I voted Gore in 2000 and Kerry in 2004 because I didn't think Bush and his cronies cared about the interests of the American People, just the top one percent.

The entire piece is from Monkey Cage and not my words. I should have made that clear.

If you think that’s bad read this and this!

But all of that pales when I hear why the Hockey Moms For Truth are angry with Sarah. >:O

I think the newness of Palin is fading and the opinion polls are starting to even out. She may have wowed them with her speech at the RNC, but everything that has come after (the lack of access; scandal after scandal; and her ignorance on a lot of topics) is chipping away at that incredible spurt she has given the McCain campaign.

But her approval rating has dropped something like 10 points since Saturday. Hmm, I wonder what happened on Saturday that would influence people's opinions of Palin. I'm think it happened at night, probably seen by many live... on Saturday night. Well, I can't think of what it could have been.

"And I can see Russia from my window" or "I think it's God trying to hug us closer" or "I don't really know what that means (Bush doctrine.
The skit was hard on Hillary too but didn't not question her intellect or qualifications.

From the Hillary Clinton Forum.

Maybe the early-September Halloween season is over.

Below are some actual quotes by Governor Palin during a series of interviews by the Anchorage Daily News in 2006 when she was running for Governor. This is so incredibly whacko, it's hard to believe that it's true. But it is!

On Creationism:
The simple yet elegantly awkward moose proves God's creation and not evolution is the source of all life. How could something as oddly shaped and silly looking as a moose evolve through so-called "natural selection?" Is evolution a committee? There is nothing natural about a dorky moose! Only God could have made a moose and given it huge antlers to fight off his predatory enemies. God has a well known se nse of humor, I mean He made the platypus too.

On oil exploration and drilling in the ANWR:
God made dinosaurs 4,000 years ago as ultimately flawed creatures, lizards of Satan really, so when they died and became petroleum products we, made in his perfect image, could use them in our pickup trucks, snow machines and fishing boats.

Now, as to the ANWR, Todd and I often enjoying caribou hunting and one year we shot up a herd big time, I mean I personally slaughtered around 40 of them with my new, at the time, custom Austri an hunting rifle. And guess what? That caribou herd is still around and even bigger than ever. Caribou herds actually need culling, be it by rifles or wolves, or Exxon-Mobil oil rigs, they do just great!

On Alaskans serving overseas in Iraq:
Well, God bless them, and I mean God and Jesus because without Jesus we'd be Muslims too or Jewis h , which would be a little better because of the superior Israeli Air Force.

Most cheering news I've seen all day, and thank you, Louise, for the additional info. If anyone drew a graph of frustrated-scream-induction caused by this election, at least over here at my house, it would be through the roof.

It terrifies me how easily people are swayed by a pretty face and a little stage magic. But then, we did elect an actor to be President. Twice.

Randy Johnson - God (or Goddess) bless you. You give me hope.

Chuck, you obviously don't check with Snopes.com first before stepping in the parody poo. Or were you trying to be funny?