My Town Monday: Detroit's Neighbor to the West-Dearborn 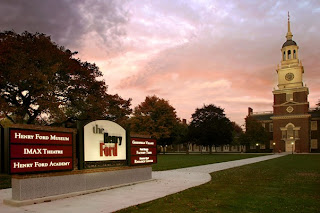 Dearborn's large (almost 25 square miles), populous (close to 100,000 residents), young (median age is 34½) and Arab (almost a third of its residents claim Arab descent). That number's probably too low, as Dearborn is home to the largest population of Middle Eastern residents anywhere outside of the Middle East. It's a city where the Arabic and English alphabets are both displayed. Students exiting the high school I often pass appear to be almost entirely of Arabic descent based on their dress.

Dearborn's past — and hopefully its future —are linked to Henry Ford. He lived here (his house remains), he built the Rouge Plant there, and developed subdivisions for his employees. Most buildings and residential homes have some tie to the man.

My parents live in a 1100 person senior living facility called Henry Ford Village. Many of the streets reference Ford and his accomplishments. The Ford Center for the Performing Arts sits at the major intersection. "The Henry Ford" is a huge complex with historical homes transported there, an historical museum, a car museum, trips to the new Rouge, and many other enjoyable activities, both indoors and out. Many weddings take place here. The parks bear his name. If Michigan has a Pontiac and a Cadillac why not a Ford? Doesn't sound like a city, I guess.

Dearborn has taken a lot of raps over the years for excluding neighboring Detroiters from their parks and recreational activities but now Dearborn has a growing African-American population.
It is an interesting community that is striving to keep its youthful population by providing night life, college life, and a vibrant restaurant scene. Hopefully it will succeed. And likewise the car company that resides there.

Check out more My Town Monday posts at the wonderful Travis Erwin's blog: http://traviserwin.blogspot.com/
Posted by pattinase (abbott) at 8:00 PM

What college is in the town? I vaguely remember going to Greenfield Village when I was a kid. I remember a cuckoo clock and gardens.....

Cadillac and Pontiac were OLD names! From the early days of Michigan-- their connection with cars came much later in the family line. That's all.

But, as your post shows, Ford gets immortalized in much more than one single town name (especially since neither Cadiallc nor Pontiac are anything to get excited about.)

I've never been to Cadillac. Pontiac once or twice. Thanks, Barbara. Can't wait to see what you've done today.

I consider myself a Ford man though at present time I don't own one.

There's some hot new ones coming out. Stay tuned.

I always wanted to visit the car museum in Dearborn. My dad owned a 1928 Model A for many years and I used to drive it once in a while. Maybe I'll get there some day. Interesting post.

Just come right out and you can stay with me.

Yes, they have moved them from all over the country. Most of them years ago and do a good job in preservation. Greenfield Village and the Henry Ford Museum are quite worth the price and time.

so, do you have great Middle Eastern restaurants?

We do have many Middle Eastern restaurants. The strange thing about them--they all have the same menu, much like Thai restaurants. I like the food, but the predictability is a turnoff.