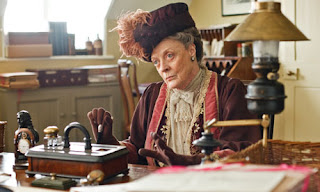 Downton Abbey began Sunday night on PBS and my skepticism was soon put to rest as it became clear this was a well-rounded look at nobility and their servants in 1912.

Done by the fellow who did Gosford Park, it managed to imbue its sizable cast with enough tics and personality to tell them apart and be interested.

Best line. Someone refers to something happening on the weekend. Maggie Smith, in her role as the dowager duchess, says, "What's a weekend?"

Did anyone ever nail the life of nobility better?

This looks to be the best thing on PBS in a long time. Anything new on TV catch your attention?
I'm also looking forward to LIGHTS OUT on FX.

I would watch just about anything with Maggie Smith. Damn fine actress.

Well, stuff I've written about this morning...haven't caught this one yet...

Patti - Thanks! Must keep my eyes open for this one. And yes, that one line does say it all!

My wife watched it (at my urging; meanwhile, I watched "The Cape") but I will watch in On Demand and be ready by next Sunday. She enjoyed it. Does Masterpiece ever broadcast a bad show?

That was our favorite line too, Patti. In fact we were saying it for the rest of the night.

ITV has already annoynced there will be a second series made this year.

We've seen Maggie Smith on stage three times (twice in the 70's, once in PRIVATE LIVES, once in 1990, in LETTICE AND LOVAGE with Margaret Tyzack) and she was wonderful.

They never have a bad series, but they do have some that are awfully predictable and staid. This was not. Along with the new Sherlock Holmes series, things are happening.
We don't seem to have PBS ON DEMAND. I wonder why not.
Every line that rolled out of her mouth was priceless, Jeff. She literally can put a spin on any line.

Do you have Comcast, Patti? They foolishly hide PBS on-demand away from the other networks.

Thanks for the heads up Patti. I love PBS and have seen so many great shows and series on that channel.

Look under "Television Entertainment" for what (probably minimal) ABC offers there are. You'll probably have to look under the Educational menu for PBS on-demand offers, even those, like MASTERPIECE CLASSIC/CONTEMPORARY/MYSTERY!, that can only be Very loosely so described.

Network, Sean...not to be a Pecksniff, but the channels in that network particularly differ widely in how they program the materials they get from PBS and from the syndicators (and the smaller public networks, such as MHz WorldView, World, and Create...and Deutsche Welle, the German public network pretty widely seen here, some of its shows even more widely seen, such as JOURNAL, EUROPEAN JOURNAL, EUROMAXX, and GLOBAL 3000).

I always felt like things are hidden from me ON DEMAND. Things seem to come and go like BBC AMERICA and SUNDANCE.

I haven't seen this, but I'll be looking for it. Sounds like our kind of program.

Patti, check around the dial. We thought we didn't have ABC On Demand either but it was just on a different station than all the other networks. I don't know about PBS but they do rerun it late at night during the week. It helps that we have Channels 13 and 21 and they run "Masterpiece" at different times.

George, it is definitely one you should try. There were 7 episodes originally on ITV in Britain but they've edited them into four 90 minute shows here.

Or you could look it up - as Todd said, Comcast does have PBS HD On Demand.

Jeff, on-demand is not the same thing as the in-line broadcast station...it almost sounds like you're referring to the ABC station.

Patti, definitely look at the TV Entertainment button for the various cable channel menus, as well...though Sundance and IFC might only have their series there, while their films are under other headings (IFC might also be under "The Cutting Edge" button, along with Adult Swim and other hipster stuff). But PBS, for absolutely no good reason, is definitely tucked under the Educational heading on the menus I've seen.

Some PBS stations definitely rerun programming overnight, either taking the HD01/02 feeds, or scheduling them themselves...some of the nonfiction series are also repeated overnight on that World network I mentioned. Jeff, for example, would see that on WLIW 21.3.

Yes, the PBS online episodes are pretty easy ways to catch up on some things. Some station website might help, too, when they don't simply bring you back to PBS's site. Also, some PBS materials are on Hulu.

Saw it. Loved it. Of course, my WIP takes place in a house just like this, but in the 1930s. Maggie Smith is always wonderful; her fine touch of comedy is beyond brilliant.

She is truly brilliant.

Isn't it delicious? I also loved it when Maggie Smith claimed the newfangled electric lights were so bright they hurt her eyes.

I love anything set in the Edwardian era. It's the last gasp of the old order before the modern world takes over. Aristocrats had become superfluous and tragi-comic.

A great observation. And those of them that recognized it got a leg up on the future.

Aren't we entering a new era of aristocrats? Don't we call them bankers?

At least they work for a living--even if it's at how to steal our money.

This seems to be somewhat similar to the classic UPSTAIRS, DOWNSTAIRS. Did that ever make it to the U.S.?

Indeed it did. This is a bit more acerbic and with better productions values but similar. I understand they are also making a new Upstairs, Downstairs.

It reminds me that when I was a child, we didn´t talk about weekends, but Sundays. Saturday was a school & work day until I was a teenager - and then we adopted both English terms: weekend + teenager. It sounds quite funny when my 76-year-old mother uses these foreign sounds.

I likked The Cape strictly for the comic book-ness of it. The Hawaii 5-0 for the same reasons. PBS had a pretty good Sherlock series with that Cumberbatch guy in the lead- watch for him, he'll be big.