OF MICE AND MEN and INSIDE JOHN MALKOVICH 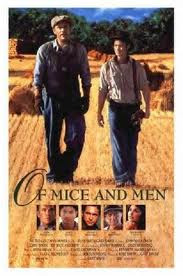 This is a post that may skitter all over the place so I hope you will bear with me. I saw an incredible production of the play OF MICE AND MEN at a local theater, which managed to make every role shine in a way I've never seen before.

Suddenly I understood the play wasn't just about Lennie and George, but all the folks working at that ranch-each of them isolated because of race, age, intelligence, loneliness, unmet aspirations, sex, size. It was the moment in the theater when a chill comes over you and you know you are seeing something truly special. You know you finally understand a piece of work in a more profound way than before. AMAZING. This play also featured the oldest dog in the world. He had to be helped across the stage, helped up and down. (Is it animal cruelty to force a dog of this age to act?)

And one of the most amazing performances was from the actor playing Lennie.

The performance of the actor playing, Lenny, the guy who wants to tend rabbits (so I don't ruin for anyone who hasn't read it), seemed amazingly like what John Malkovich might be like in that role. So I am thinking to myself: am I inside John Malkovich here? His face, his voice and speech patterns, his gestures. JOHN.

Why does this actor seem so much like him? Back home, I go online and it turns out Malkovich played this part in the nineties and I probably saw it. The actor must have seen this performance too and copied it. Maybe unconsciously, maybe not.

Is this legitimate to you? If you copy another performer's speech patterns and mannerisms almost perfectly, is that acting or miming? I'm not sure. I have heard when roles are replaced on Broadway, the director often wants a performance as much like the original one as possible. Especially if the original actor played it to great acclaim.

But I can't imagine the director saying to this actor, play it like Malkovich did. Get inside his head. What do you think? Should you be able to copy an actor's style to this extent? Should an actor own his style? Have other actors played a part exactly the same way as in an earlier movie or play? Jeff Bridges' Rooseter Cogburn was different from John Wayne's, for instance.

THIS IS NOT TO DETRACT FROM WHAT WAS TRULY A BRILLIANT NIGHT AT THE THEATER FOR ME. I'm just wondering....
Posted by pattinase (abbott) at 8:00 AM

No, I don't think it's legitimate and it bothers me a lot when I see an actor so obviously (slavishly?) copying another.

After all, how much of Christian Slater's career was based on him copying Jack Nicholson?

PS - Glad you liked this so much. It's rare to be that affected by a play, in my experience. At least, it's rare for such a positive experience - I've hated shows so much I've walked out at the intermission.

Slater is an excellent example. And various actors, such as Cusack, played Woody Allen, although it that case it may have been directed. Jason Alexander played him in the first few episodes of Seinfeld before he found his groove.
Nice when you don't expect to like a play (because I have seen it in every version) and then do. They really emphasized the other men--gave them time to develop their issues.

Patti - Really interesting question (but all of yours are!). And I am so glad you enjoyed the film, by the way :-).

I think actors should try to be unique and not be satisfied with copying another actor. That said, though, there is something to be said for learning from another actor's style. and using that as one learns the craft. Does that make sense?

I wonder if the same thing goes for "cover songs." If a band covers another band or singer's song, should they try to sound just exactly like the original? Or should they do it completely differently?

It was a play in this case. Which made the imitation even stranger.
Oh, and the cover song idea is interesting too, Margot.

I'm always swayed by the quality of the performance. If an actor can channel John Malkovich and deliver a convincing performance, it's okay with me.

And he sure could.

What a GREAT Play ... the Stella famiglia owes Mr. Steinbeck a lot because of how much reading my kids did because of this play (and probably Malkovich as well because his performance had them rereading it).

I don't mind it if an actor recreates/copies/clones any given performance so long as it works on stage. I guess if we know the actor (i.e., he or she is well known), we might expect something new, but I can't blame someone making their bones to go for a specific effect (again, if it works).

Back in my theatre days, I was happy enough when the actors remembered their lines, never mind went for a particular acting method.

Tortilla Flat and Cannery Row are pretty amazing too.

I played Lennie, twice actually. One of the hardest roles for an actor to tackle in my opinion. Took "think the thought play the action" to whole new level. Not ashamed to admit it, but Lennie was one of two roles in my acting experience that pretty much scared me to death and took me out of my body entirely.

Well, this was amazing. Just that it was a replica of Malkovich. When you played it, did you have any earlier performances to deal with?

Nope. Both directors did the smart thing and just pushed and pushed and had faith that I'd find the character's core. The key to playing Lennie is retraining your thoughts (to think like a five year old traumatized boy) and, as always, listening to others and playing the action/motivations of the scene.

Very possible that it was the director who wanted this performance, and not the actor.

A grievance I have against Billy Bob Thornton is that for SLING BLADE he ripped off Robert Duvall's sharecropper character in a Horton Foote film nobody's ever seen called TOMORROW (1972). Duvall deserved the Oscar.

Oh, I saw that film. I am a big Horton Foote fan. I can't remember the performance well enough to say, but it makes sense.

I'm with George on this one.

I wonder how old or experienced the actor was. As a lot of writers learn their craft by knocking off their betters (Robert B. Parker unashamedly used to say his intent with THE GODWULF MANUSCRIPT was to copy Chandler, but in the 70s), maybe that's the stage this guy ios at now.

If he's going to copy/be inspired by an actor, he could do a lot worse than John Malkovich.

I'd say thirty and he did nail him.