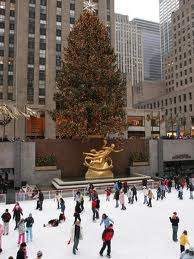 My nephew proposed to his girlfriend this weekend. They live in Virginia, but they went to New York for the weekend. They were ice skating at Rockefeller Center and he proposed to her in front of the Christmas Tree. What a romantic! She said yes, of course, or I wouldn't be writing this.

Did you propose or get proposed to in some romantic way? If I remember correctly, I just started saying to Phil, "when we are married" we should do this. And after a while, he bought it. I don't think that late sixties lent itself to romantic gestures.

How about you?
Posted by pattinase (abbott) at 3:00 PM

Patti - Aww...that's so sweet! And congratulations to your nephew and his fiancee. My husband and I were college sweethearts and he proposed to me on the night of this big formal dance we were attending. Simple, but very heartfelt...

Jackie says your experience with Phil is just the way she remembers things too!

Clearly our generation didn't go for the big gesture. Although I was eighteen and wouldn't have recognized one.

I suggested to one ex (key word?) that I would get married if she wanted to...and another woman I've spent a lot of time with recently suggested we should marry so as to get each other's Social Security and poperty. Get me to the church on time?

My experience with Sandi was much like yours and Phil's. Then I moved away and we still saw each other a lot. The final peice fell into place when she found out on December 20 that she could get out of her teaching contract in San Antonio and start in Laredo on January 2. We told our folks that day and got married on the 29th. That was 31 years ago.

I think marriages have been based on less, Todd, but you owe yourself the great romance.
Scott-were we the least romantic generation ever. We saw everything in terms of its practicality.

Livia and I had already talked about getting married, but I actually proposed between movies at a drive-in theater (remember those?) that's long since been torn down and replaced by a shopping center. The movies were FUNNY LADY with Barbra Streisand and Woody Allen's TAKE THE MONEY AND RUN ("I have a gub.") Not very romantic, but hey, at least I remember those details.

My experience was also much like yours. I just took it for granted that we would get married. Kitty says she asked me, though, and I'll trust her memory, just as I have trusted her with everything else for the past 41 years.

I may not be romantic, but I sure am grateful!

Hey, at least James remembers the night and the movies. And not a bad double feature and why did they stop showing double features?
And I sure am grateful too.

Patti, I think the grand romantic gesture has always been the exception, perhaps particularly among the more successful, durable marriages. I certainly wouldn't say No to more romance, but I've rarely suffered more than I've benefited so far.

Very Sixties. Maybe romantic in a reverse "By the Time I Get to Phoenix" kind of way. It was by long distance from LA to Indiana.

I'm ashamed to say that I didn't make the grand romantic proposal. I wish I had.

We were talking about a friend's upcoming nuptials and I said something like, "So, what do you think of us doing that, you know, getting married?"

And thankfully, she said yes.

I'm better than that, I hope.

Looks like the big romantic proposal is a rarity. Maybe longevity counts more in the end.

Well, the big romantic gesture can seem a bit...theatrical...between friends with a healthy lust for each other (often a prescription for a happy marriage, I gather). I suspect in those circumstances it often makes more sense to bask in the warm glow of mutually coming to the conclusion...also note how many times here the woman brings it up as formally as it gets. Emily Post certainly doesn't swoon, but might tsk; Jane Austen tries not to smile too broadly.

Sue and I were sitting in front of the fire and she vanished and returned wearing very little, and I got ideas.

We were already living together and knew that we would be married "some day" but had made no real plans. Then we had to take our new puppy to the vet to be wormed (so romantic!); while our puppy was being cleaned out, we walked around a nearby mall and noticed a reasonably-priced ring set at the jewelry store. We went in and made a down payment on the set. Then we walked back to the truck and my husband said, "Just so you can always say I proposed--will you marry me?"

Perhaps not the great theatrical grand gesture, but we've been married 22 years in February.

BTW, I do not mean to denigrate your nephew's proposal--it was romantic and in a public setting, but the public was not part of his proposal. I always feel sorry for women when their boyfriends propose via the jumbotron at sports games or in some big public fashion where saying "No" would be very awkward. I feel there's almost some emotional blackmail going on.

Deb's right about the Jumbotron proposals. Whenever you see that at the ballpark (usually at the end of a list of birthdays and other celebrations), a large part of the crowd is going to yell out, "No" to the prospective bride.

Of another comment Deb made, in reading recent wedding stories I've noticed that pattern: the couple was already living together and at some point along the line, perhaps on a trip to Hawaii or Paris, he popped the question (to which he already knew the answer).

As a related point, I'm wondering how many of the other long-term married people who have answered had big lavish weddings or just went to City Hall (or the equivalent).

We had planned a modestly elaborate wedding but when Jackie's younger sister (who is long since divorced) undercut that by announcing she was going to get married six months before us, we cancelled the whole thing, had a small ceremony (30 people) in the rabbi's study, then convoyed into Manhattan for dinner at a nice restaurant.

We didn't even go on a honeymoon until six months later.

We never went on a honeymoon. Phil was between semester in grad school.

#1: This is crazy driving back and forth. Let’s get married already.

#2: While we’re in Vegas, what say we get married?

Dialog for your next book, right?

Livia and I had a small, definitely non-fancy church wedding. She made her own wedding gown. No honeymoon because we got married on Saturday and her college semester started Monday.

James, are you the Civil War novelist James Reasoner? I read Manassas and Shiloh. Enjoying it no end, brother. Great stuff.

Charlie,
Yep, that's me. I appreciate the kind words.

Charlie-He also writes crime fiction. Try Dust Devils if you want to be blown away.
And Charlie Stella has quite a list of his own.

Sounds like a movie proposal. My first wife proposed to me.

I think that's most common, Charles. You mean need some prodding.