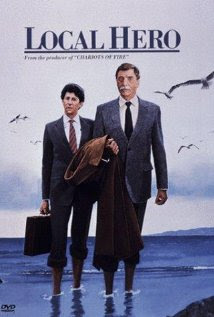 Charm is underrated. Local Hero is loaded with charm and magic. Made in the early eighties, it is one of Lancaster's last films and perhaps one of Peter Riegert's first after Animal House.

Happer (Lancaster) sends Mac (Riegert) to a remote Scottish village to secure the property rights for an oil refinery they want to build. Mac teams up with Danny, a local company man, and starts the negotiations. The local villagers are delighted. However a local hermit and beach scavenger has other ideas.

Lancaster eventually arrives and both Americans are overcome by the charm and magic of the village. Happer is more interested in the Northern Lights and Danny in a girl with webbed feet, Marina (Jenny Seagrove) than negotiations over land.

The film was directed by Bill Forsyth after the equally charming Gregory's Girl and before the delightful Comfort and Joy.

It manages to be about something while being charming, funny and magical. How many movies pull that off?

More forgotten movies can be found at Todd Mason's blog right here.
Posted by pattinase (abbott) at 6:00 AM

I love that film. Good call.

One of my favorite movies which I own and frequently watch. The people of the village are great and watching Reigert's gradual tranformation from hot shot oil dealer to quality life style appreciator is moving and gratifying. And there are no explosions, gun play, vampires or gratuitous sex.

Patti - Local Hero really is a charming film. That word really captures it :-).

Yes, it was a delightful movie.

Riegert was in the adaptation of Ann Beattie's CHILLY SCENES OF WINTER between ANIMAL HOUSE and this one.

My favorite Lancaster movie made after this one (other than his appearance in FIELD OF DREAMS) was the elegaic ROCKET GIBRALTAR, which was filmed on Long Island and features a terrific cast, including Patricia Clarkson, John Glover, Kevin Spacey, Bill Pullman and the very young Macaulay Culkin.

Good choice. I like the whole shtick about the rabbit.

Burt Lancaster is one of my all time favorites. I will watch and re-watch anything he's in.

A very uncharming but excellent film from the end of his career--Atlantic City.

A great flick and a wonderful choice, Patti.

And as you pointed out, GREGORY'S GIRL by Bill Forsyth is equally charming and wonderful

My dissertation took its name from this film. My dissertation director told me he was relieved as it was one of the few pop culture references I made that he got. I worked Ramsey Campbell and Clive Barker into my study of medieval saints. If I had it to do over (shudder) there would have been a lot more of that.

It's funny to see Peter Capaldi being so sweet, considering his current fame as Malcolm. LOL!

I LOVE this movie!! I meant to write about it one of these days, now I don't have to. :)

Burt Lancaster is so perfectly cast in this. There are a couple of scenes he's in that are downright hilarious.

The rest of the film is so gently charming and magical.

I have the DVD at home which I am planning to watch some time this week.

Just returned from a dental emergency. My teeth rule my life.
Glad everyone loves this movie as much as I do. I could do Burt Lancaster movies forever. Maybe I will.
And this is a movie I never see on TCM or other networks for some reason.

Yes, it doesn't get into hot rotation very much, does it? And Riegert is underappreciated and usually at least interesting in nearly everything I've seen him in...he helps hold A MAN IN LOVE together, for example.

Sorry about the teeth...and as one facing some minor firsthand health matters, including dental, and major secondhand ones, all sympathies.

I loved LOCAL HERO when it first came out. I've seen it once on DVD. I should watch it again. Wonderful choice. Good luck with the teeth!

Reminds me I've been putting off needed dental work...

Forsyth's films are always a delight: I still smile every time I think of the penguin in Gregory's Girl or the two boys trying to hitch to Carracas. And Comfort and Joy with the wonderful Bill Paterson -- Forsyth should get more attention than he does.

Thanks, Jeff, for reminding me of Chilly Scenes of Winter which I've not seen in too many years.

Oh and I forgot is was he who made Housekeeping, a worthy film of a wonderful book. Pity he doesn't seem to be making anything lately.

An quirky delight. I'd forgotten he was the director.

I had this movie recorded yet somehow was deleted before I could watch it. Now you go and tell me it was magical?

Thanks, Patti. Thanks alot;^)

Any guy who makes an Animal House is OK with me.