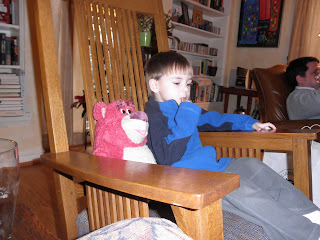 Although I was impressed with many aspects of TS3, I was also surprised.
It was basically unremitting horror and tension as Woody and Buzz and the merry band of toys, were on the run from the get go. Do children really need this much stress in their movies? What happened to the "breaking into song"or "chirping birds in the trees" to relieve tension like that found in the classic Disney movies.

I think TS 3 is a perfectly fine movie for older kids, but I am not sure it's so good for four-year olds. Should life, or more importantly death, be so vividly portrayed. Should they learn about treachery, unemployment, redundancy, betrayal, death by fire, violent treatment and imprisonment at such a young age? Sure it ends well, but that was only the last five minutes. I have seen prison break movies with far less single mindedness in intent.

And as long as I am being cranky, how about a toy that doesn't reek "WHITE." Woody, Buzz, Barbie, Jessie, Bo, the baby doll and so on are all white kids' toys. Even my kids in the seventies had Native American dolls and Black Barbies. Why are all the kids at the day care center white? Where is the diversity?

What do you think? TOY STORY 3? Does it have its downside? Or should I imbibe some Christmas cheer and stop being the Grinch?
Posted by pattinase (abbott) at 9:24 AM

Haven't seen it yet but your points certainly sound valid to me.

The problem is, while it might be fine for older kids the little ones are going to see it too.

I think, in many respects, TS3 was written for the adults who were kids when TS1 came out in 1995...and for us adults who saw the movie as adults. It was a hard picture to watch at times. Sure, it had the standard Pixar flair, but it--like the past few Pixar films--was basically an adult film that just happened to be animated. Serious tone. My wife and I loved it, but we had a deeper emotional connection than my son did...and I think it's because we "grew up" with the gang and were saying goodbye.

As adults we were able to gauge the real danger-and the fact that there wasn't going to be something horrific. But for small children, that wouldn't kick in. Every outcome until the final one was fraught with sadness, nostalgia and danger. Not really kid things. I think they made this film for themselves--and for those who haven't been kids in a while. And for the collectors of these toys. My grandson loves to go on to you tube, punch up "toy story toys" and hear how the designers worked on even designing the boxes to insure collectors would want to have them. It's not really about the kids--isn't that what EVERYONE LOVED RAYMOND said in the title the first year or so of the show.

Patti - I haven't seen TS3, but I completely agree that we stress children enough. I'm honestly not one who believes in overprotection; however, children do need to be safe and comfortable to explore their worlds. Stress does not allow that.

I think Pixar is constantly fighting the notion that "animated" films are for kids--which I for one champion. The rest of the world, especially Japan, has recognized animated works as valid forms of mature art for years.

Regrettably, until that idea sinks in, we'll have situations were parents take their children to see animated films that are a little more mature than expected. However, I don't think there's anything in Toy Story 3 that's disturbing enough to warrant a sterner MPAA rating, nothing that couldn't be handled with an honest and open conversation with your child.

I'm afraid the sense of adventure and excitement that filmmakers think is necessary for box office and video sales drives the level of tension, not any consideration of the reactions of an age-appropriate audience.

I heard similar arguments about the portrayal of death back in the 1950s with westerns, and those were never intended for little ones. On the other hand it was pretty obvious they were not set in "real times" either. At least, no one in my neighborhood rode a horse and carried a gun down the dirt main street.

We (his parents especially) have talked a lot about death since seeing that and Charlotte's Web. That incinerator scene scared the bejesus out of me, bringing back the notion of extermination camps.
I am not saying it wasn't a brilliant film in many aspects. Just a bit too mature for its supposedly target audience.
Can anyone say it wasn't relentlessly gruesome and sad?

Haven't seen it...but will suggest that happy little Thumper doesn't exactly make up for Bambi's mother being murdered...however, I dug heavy things in kids' films as a little one, even if they did cut me to the core at times.

TS3 is relentless in its grim story-telling because its makers were interested in emulating a prison break. There are almost no light moments at all. I found it quite exciting-just wonder about kids under six and its impact on them.

I was also surprised at the cheap shots at the Barbie and Ken characters.

TS2 is still my favorite.

All of them have their moments and their MOMENTS for me.

Your comment about the "whiteness" of the movie was valid. I guess since Disney made "The Princess and the Frog," they feel they've done their bit for diversity.

Glad someone picked up on that. It really bothered me.