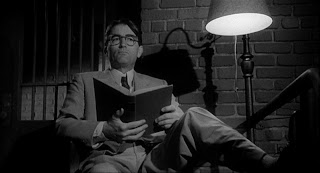 Which I will do with a lot less panache than Sandra--due to my technological inadequacies.

What hit you on an emotional level and made you cry?

Saddest book-A PRAYER FOR THE DYING by Stewart O'Nan, which constantly topped itself in the sadness quotient. Runners up: THE END OF THE AFFAIR. Graham Greene, THE GOOD SOLDIER, Ford Maddox Ford, MYSTIC RIVER, Dennis Lehane.

Saddest Movie. This is may be a largely forgotten film but I remember Megan and me walking out of a theater in Amsterdam with tears streaming down our faces. PRIEST.
Runner up. BRIEF ENCOUNTER.

Saddest TV moment. On M*A*S*H, when Radar returns to the operating theater to announce Henry Blake's plane home had been shot down. I never remember being more shocked at something on TV. Second pick: the entire first season of IN TREATMENT, especially the Alex and Sophie story lines. Also MAD MEN in its entirely.

Okay. Cough up your choices.
Posted by pattinase (abbott) at 5:00 PM

Saddest book: ALL THE KING'S MEN, by Robert Penn Warren. At the end I wanted to say to Burden, "You don't *have* to suffer!"

Saddest movie: EDWARD SCISSORHANDS. I brook no debate on this choice.

Saddest TV show: THE NEW ADVENTURES OF LOIS AND CLARK, where Clark leaves Lois behind to fight for Krypton in the war. I found this inexpressibly sad; I had some reasons.

Oh, wasn't Edward a great movie. I haven't read ATKM in years. Have to get back to it.

Too many choices, but for what it's worth…Saddest Book: UNDER THE VOLCANO, by Malcolm Lowry. The anguish and self-destruction is unbearable and beautiful.
Saddest Movie: Tough one, but maybe THE DEER HUNTER? Saddest TV Show: Without question …SIX FEET UNDER (and if you watch it to the conclusion the finale will rip your heart out in ten minutes flat.) Great. Now I am totally depressed.

Loved Six Feet Under. And it was one of the saddest endings ever. Oh, Deer Hunter, those roulette scenes. Ach.

Saddest book: A WIDOW FOR ONE YEAR, by John Irving. The scene where the two boys are killed in the car accident.

Saddest movie: SAVING PRIVATE RYAN, the second time I saw it, knowing what would happen. I started losing it in the first five minutes.

Saddest TV Show: ST. ELSEWHERE, when Dr. Craig is remembering how he used to read Green Eggs and Ham to his estranged, and now dead, son, when the boy was a child.

I can't choose! So for book and movie I'll nominate SOPHIE'S CHOICE. I'm all in for Six Feet Under too.

I'll also throw in a couple of episodes of House. One where Cameron sits up and watches a homeless man die without any morphine (so he can be remembered by someone) and the one where Cameron helps the research scientist played by Joel Gray die.

Saddest book: Where the Red Fern Grows and Black Beauty (from my childhood).

Saddest movie: Old Yellar [I haven't seen a movie in a theatre in about three years].

Saddest TV show: For some reason nothing is jogging my memory here, but that's probably because I haven't watched regular TV in ten years (only in sporadic bits at a neighbour's place). I may remember tomorrow or the next day.

Book: The Road, by Cormac McCarthy. My first child, a son, was 1 week old and the ending absolutely destroyed me.

Movie: Rudy. I cry every time like it's the first time.

TV: I completely agree with the Six Feet Under Finale. I was only a casual observer of the show but I could talk about that final 10 minutes all day. It was probably the best way to end a TV show I've ever seen. It was both inspirational and heartbreaking.

Brian's Song was my generations' Rudy.
Have to watch that last episode of Six Feet again. I remember it as great, as was the entire show, but seem to forget this sadness thing. Although I do choose his way of being buried. What can be better than a green funeral.

Not much of a spoiler, but still a spoiler, given that the barebones description doesn't get at the excellence of the execution:

I found SIX FEET UNDER uneven, to say the least, but the end of the finale, wherein we saw the deaths of the surviving characters in chronological order well into the future, was an organically excellent way of wrapping the series.

What comes to mind:

Saddest fiction: As a kid: the first chapter of THE LONER by Ester Wier. A few years later, Kit Reed's "Automatic Tiger" had a serious resonance, as did LONG DAY'S JOURNEY INTO NIGHT, which I read and heard before I saw it performed, and Jack Finney's "The Love Letter." More recently...hmm. Joanna Russ's THE FEMALE MAN, in part, and certainly THE MALTESE FALCON. The first Marcia Muller I read, TROPHIES AND DEAD THINGS.

Saddest nonfiction: A long WASHINGTON POST MAGAZINE report/essay a year or so back about an Alaskan coastal village that had faced a rash of teen suicides. There was at about at midpoint a line I paraphrase from memory, from one of the surviving teens, "Most of the gunshot suicides are the boys. The girls usually hang themselves." I couldn't read any further for about five minutes.

Saddest movie: As a child, SNOOPY, COME HOME managed to outdo the various Disney abandonment horrors; as an adolescent, ON THE BEACH. More recent examples which come to mind are PONETTE and ETERNAL SUNSHINE OF THE SPOTLESS MIND in part, but perhaps the one which surprised me the most was the ending of LAST NIGHT, with the best Sandra Oh performance I've seen. "Tell me something to make me love you." Devastating.

Saddest television drama: Series-long, the one which is most adept at inspiring existential sadness, less good at anything else, is ER (though John Wells's other series THIRD WATCH was similarly adept). Series such as ST. ELSEWHERE, HOMICIDE, THE WIRE, DEADWOOD, SCRUBS, and others have been good at this And other things. The most recent devastating example to me would be what remains the best episode of HOUSE so far, wherein we learn how House gained his limp and his constant physical pain, and became estranged from the love of his life. Childhood: The first ABC AFTERSCHOOL SPECIAL, "The Last of the Curlews"

Radio reportage: I had to turn off the NPR live coverage of the post-central China earthquake coverage.

Actually, as a teen, the saddest movie, at least tied with ON THE BEACH, was the Franco Z. ROMEO AND JULIET.

And MISSING, the Spacek/Lemmon film based on the Chilean fascist takeover and the "disappearing" of Thomas Hauser, and PATHS OF GLORY both floored me on first viewing.

Seeing FORBIDDEN GAMES and THE 400 BLOWS at about age 12 also made a very big relevant impression.

And I remember PRIEST. A lesbian friend I was watching it with was utterly devastated, and I could see why.

Todd-this is cleary your meme.
On the Beach scared me to death-I have never been able to watch it again. I AM LEGEND was sad recently. And the O'Nan book-all of them.
And in a hattip to women everywhere-An Affair to Remember.

Some other items that have occurred to me since:

The film IRREVERSIBLE, absolutely brutal in its first half, and working backward to display the rather happy lives that are about to be horribly disrupted.