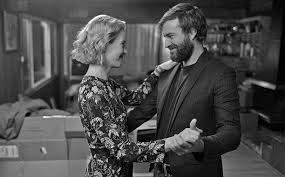 I caught this on Netflix. It was expected to get more of a release than it did because the audience at Sundance was favorable toward it. But here it is and I suspect it's because it is such a small movie. Really only two characters with a brief appearance by Clu Gullager, hardly recognizable.

Sarah Paulson and Mark Duplass play high school sweethearts who meet up when she's come back to their small California hometown to help her sister and he's come back to bury his mother. The movie is in black and white--I don't know why--because I think color would have served it better.

The movie was written by Duplass and he plays the same sad, insecure character he did on his two-year show on Showtime, TOGETHERNESS. Sarah Paulson is more joyful, seemingly having a good life, but eventually it's clear her effervescence is put on. It's a sad little movie but the acting is good and the dialog rings true. You believe they were a couple twenty years ago and are sad it went wrong. It is a very quiet film.

Question: Is black and white always a viable option in a movie or should it be reserved for films where is makes sense?

Here is what the director (Alex Lehmann) said about making the film in black and white.

That is a good question. They are colourizing the old ones, anyway!!!

Yes, so why make a movie in black and white unless there is a specific purpose? Noir, for instance.

Patti – Never heard of this one. Now I need to see it. Thanks. Also, about 10 years ago, Mark Duplass and his brother Jay made a great little film called THE PUFFY CHAIR. And, yes, black and white is always a good choice. Some of my favorite westerns are in b&w. Wish Hollywood would make more in b&w. But it seems people want color and to do otherwise hurts box office.

I like watching 1960's black & white movies like THE PAWNBROKER, which was filmed on the streets of New York. I take your word for it that this would have benefited from color.

The two of them are becoming an empire, Elgin. Between directing, writing, acting and producing.
I think color makes sense in a romance that is present day.

Patti – I suppose it is all up to the artists and what they are trying to convey. Scorsese heightened the brutality and set the time frame with b&w in RAGING BULL. Woody Allen made several of his quirky romantic comedies in b&w. But, I think Woody was trying to make modern New York look like his nostalgic image of the city in the 1940s or 1950s. Your question got me thinking about current movies and how they might look in b&w. Better or worse? The jury is out.

The only reason I can think is that is was a comment on how gray their lives were.

Steve Oerkfitz said...
This comment has been removed by a blog administrator.
9:51 AM

When Turner started colorizing movies it was terrible in many cases, but technology has changed that. Still, I do not ever want to see CASABLANCA in color.

I am not believing this is the real Steve Oerkfitz.

It's hard for me to imagine MANHATTAN and CASABLANCA in color.

They would be the two biggest. Also THE THIRD MAN.

Yes, THE THIRD MAN. I dragged Jackie all over Vienna looking for sites from the film. We rode the giant ferris wheel in the Prater.

J F Norris said...
This comment has been removed by a blog administrator.
6:17 PM

Patti-I have not posted here until now so someone is using my name again.
Talking about black and white I just finished watching In Cold Blood with beautiful photography by Conrad Hall. This film would not have worked as well in color.

BTW Patti, another 'Conrad Hall' 'Robert Blake' movie from 1973 "ELECTRA GLIDE IN BLUE" is worth mentioning because it has the greatest ending in the entire history of cinema.