Actors Who Fell Out of Favor 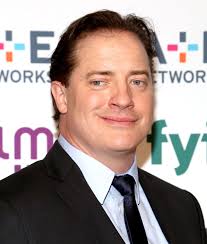 I was surprised to see Brendan Frasier playing a brutal prison guard on SHOWTIME's THE AFFAIR. What the heck happened to this former heartthrob? Yes, his looks have faded but is there more to it? Is he just not a very good actor? More often it is drugs or being over thirty-five for women that ends a career. Remember Geena Davis? I think these movie franchises are destroying a lot of careers. Robert Downey, Jr. used to be considered a fine actor until he took on SHERLOCK and IRON MAN.
Who else has wandered offstage?I know Clive Owen is on THE KNICK but I expected more.
Posted by pattinase (abbott) at 8:56 AM

Actually, Robert Downey remade his career after prison and getting off drugs. I may not think much of his Sherlock, but he is doing quite well at the moment.

A lot is probably age, as well. Michael Douglas is 74 and can look as old as his 100-year old father at times. He does well in smaller supporting roles.

I never thought Brendan Frazier was more than a pleasant lightweight actor. It's more surprising to me the continuing success some people I consider awful (I'm talking to you, Kate Hudson) have had.

James Caan had plenty of talent, but personal problems wrecked his career. Every time I see him in a movie now I think "What Could Have Been.."

Strickly speaking it seems like a complete lottery with regards to which actors and actresses become big stars and which ones dont, and then another lottery with regards to which ones stay big stars for 30 years and which ones fade after only 5 years or less. Also of course another major factor is the fickleness, hypocrisy, and often downright stupidity of the American movie going public, their choices are so bizarre and absurd sometimes.

One actor who comes to mind is Ken Wahl, who starred in television's WISEGUY. Accidents, alcohol, and (I suspect) personal life choices curtailed a promising career.

I see nothing is said here about acting skill, or choice of rolls (hard to stay popular if you're not offered good roles) or even quality of agent. I think all of those are factors.

In some respects, being a 'Film Star' is not always the best career move that an actor can make. John Hurt or Jack Nicholson certainly have managed quite long and distinguished careers despite never attempting to hide their ages, but neither of them based their careers on their looks or on being charming. Hurt also doesn't seem to mind not being the name above the title, accepting flashy supporting roles that allow him to steal the show from the nominal star. The other day I saw the actor Freddie Jones on a British soap opera, where he occasionally turns up. He's nearly 90 years old, and still acting after a career spanning 53 years. He's been the support in films like THE ELEPHANT MAN or WILD AT HEART but I wonder how many of the stars that he supported are still 'Stars'?

Yes, character roles might have saved some careers. The British has a way of nurturing the sort of actor who excels at that in Dickens, Shakespeare, etc.
Winona Ryder seems to have made a comeback from her issues. But most do not.

We've been enjoying Tracey Ullman's new series on HBO. One funny running bit is Maggie Smith (Ullman made up) "auditioning" for roles like James Bond or tough-talking street cops, but of course with her own accent.

Some actors get a reputation of being difficult such as Val Kilmer and Mickey Rourke.

It can also be a problem of what roles you are offered. I read something from James Woods who mentioned a lot of good roles he was offered but his agent turned them down without even mentioning them to Woods. Needless to say he fired that agent.

James Woods has been in some real dreck. Good thing he found a new agent.

Also, Woods can be a real @sshole himself.

I use to find Heather Graham funny in supporting roles. Over 35 age syndrome must have claimed her. Shame.

My son, the actor, has just given it up. He is now a financial advisor. It's a hard go these days.

Yes, it is. But some just can't throw the towel in and live at poverty levels hoping for a break.

I liked Downey in Sherlock and Iron Man, but, then, I am a man of uncommonly common tastes. What I wonder about occasionally is whatever happened to Genvieve Bujold, whose sweat I gladly would have fought Dirty Harry over to get the first lick of in Tightrope.

James Woods was great in a small role on Ray Donovan as a Whitey Bulger type character.
Matthew-I saw Bujold a year or two in something. She has not aged well, looks much older than she is.

Sorry to know that, Steve, altho I shouldn't be surprised. I've aged a tad myself since then.

Geena Davis doing OK...she's in THE EXORCIST tv series. Robert Downey Jr. had totaled his career in a lot of crap films, including some overrated indies, before getting himself straight and rebuilding with the likes of IRON MAN and THE AVENGERS and SHERLOCK and ZODIAC and GOOD NIGHT AND GOOD LUCK...still making some bad choices, such as THE JUDGE.

Heather Graham is getting roles in the likes of ANGIE TRIBECA and the upcoming BLISS...

Part of it is that it's hard to keep up with what people are doing, with entirely too much to take in. Fraser seems to have had steady work...