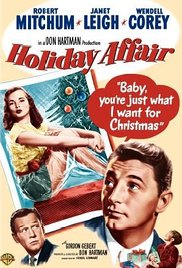 Now here was a film I remembered liking more than I did. Hollywood apparently decided that there needed to be very little chemistry and few scenes to bolster the romance between Janet Leigh and Robert Mitchum. And why did they always cast actors like Wendell Corey as the other suitor.?You know immediately he doesn't stand a chance. The best thing about the movie was the child who had quite a large part and had more chemistry with Leigh and Mitchum than they did with each other.

Leigh plays a comparison shopper at Christmas who costs Mitchum his job when he doesn't turn her in. Apparently you were not allowed to do this. Why? A widow, Leigh is dating Corey but is still pining over her dead husband. It really annoys me in these movies when without a single romantic moment, the lead (Mitchum) proposes to the woman. Really!

I always admired THE PHILADELPHIA STORY for pitting Stewart against Grant as the romantic interests. Make it count.
Posted by pattinase (abbott) at 7:00 AM

This is one I admit I haven't seen, Patti, 'though I've heard of it. Thanks for sharing about it.

I haven't seen it either, but a less likely competition than Mitchum and Wendell Corey would be hard to picture! I guess Corey had the Ralph Bellamy role. At least Ralph used to play rich guys.

Nor I, but it looks like the kind of thing I would have watched if it had come on TCM while I was home from work on 1-week Christmas vacation. That instant proposal thing? Love at first sight?

I look forward to seeing what TCM offers up this season, but your review/posting tells me I could afford to miss this one if it shows up on the schedule. Of course, I most look forward to my two favorites: It's a Wonderful Life and A Christmas Story.

Best wishes for a beautiful, blessings-filled Christmas from the humble host of Masters of Mystery (a.k.a., R.T.)

I'm a big fan of Robert Mitchum but would have to pass on this one. The only Christmas movies I will watch is A Christmas Story or A Christmas Tale(French film). I don't even like It's A Wonderful Life.

I not sure why but this movie reminded me of JUNIOR MISS (1945) perhaps because they both have a similar charming quality about them.

Stunning at 22 but still 10 years away from her most famous role.