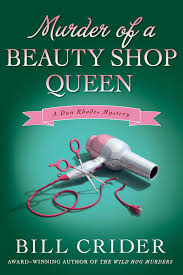 Bill Crider makes writing delightful books look easy. In fact, it is not easy to combine a satisfying crime and its solution with great characters, terrific local color, a wry sense of humor and a style of writing easy to digest. Sheriff Dan Rhoades solves crimes and keeps order (and it is not always simple with a domestic animal population that is as troublesome as their owners, and in the case of feral pigs, no owners) down in Blacklin County, Texas.
In this outing from 2012, Lynn Ashton, a pretty hair stylist has been bashed over the head with a hair dryer. Suspects range from scorned lovers, to jealous wives, to two outsiders who have been scraping the town. Or maybe Lynn saw something she shouldn't have as she waited for a rendezvous with one of her clients. The characters, both new and old, all are the beneficiaries of inventive character development and the conclusion is satisfying and solid.

As the prime creator of Realism Stephen Crane shocked the world of letters both in his writing and his personal life. His first book was Maggie: A Girl of The Streets and he spent a good share of his adult life (as much of it as there was--he died at twenty-eight) living with Cora Taylor, the madame of a brothel. He wrote dozens of short stories as well as his masterpiece The Red Badge of Courage.

While he was accepted and praised by the literary critics of the time, he was frequently derided for the pessimism and violence of his stories. He brought "the stink of the streets" into literature as one reviewer said. But his streets could be found all over America, not just in the cities.

The Open Boat, The Blue Hotel, The Bride Comes to Yellow Sky, Shame and The Upturned Face give us portraits of different Americas. As I was rereading them lately I realized that they all have two things in common--their utter sense of social isolation and the intensity of their telling. Hemingway always put up The Blue Hotel as one of the most intense-"bedeviled"--stories in our language and man he was right. The fist fight in the blizzard on the blind side of the barn is one of those most hellish insane scenes I've ever read. And the ironic words at the last honestly gave me chills, even though I knew what was coming. His years as a journalist gave him a compassion for society's discards no matter where they lived or what color they happened to be.

His sense of place changed writing. Whether he was writing about the slums of Brooklyn or the endless ghostly plains of Nebraska in winter, his early years as a poet gave his images true clarity and  potency. One critic of the time said his stories were possessed of "a filthy beauty" and that nails it.

Only a few of his stories are taught today; Red Badge is mandatory in schools. But in the many collections available of his stories you find a passion for life and language that few writers have ever equaled. Too many American masters get lost in the shuffle of eras. Crane is not only an artist he's one of the finest storytellers I've ever read.

You can't go wrong with Bill Crider and Sheriff Rhodes.

Thanks for the kind words, Patti & Jeff.

the stink of the streets seems to permeate every corner of America these days.

My is up now, Patti: Agatha Christie's memoir COME, TELL ME HOW YOU LIVE.

Great mixture Patti - and can't wait to start reading the Crider - thanks.

It's 10:35 here in Chicago and you know what that means. I've finally finished and posted my contribution. ;^)

Bring the Bride a Shroud by D. B. Olsen

(Don't forget to pause to remember all who died on 9/11 fourteen years ago.)

Up on this slightly busy day: ALFRED HITCHCOCK'S A HANGMAN'S DOZEN edited by Lisa Belknap

The schedule will be more uncluttered for next Friday's subbing. Thanks, Patti.

(And one might spare a thought for all the victims and survivors of all the political cruelty we as a species witness all around us, when not wittingly or unwittingly participating...)

Thanks, Patti, as ever, for including my post. And thanks for reminding me of Crider's great writing. I need to spotlight one of his books at some point.