Next week we will feature some reviews of the work of Ed McBain. Feel free to jump in with one. Send it to me if you don't have a blog. Or post it on Facebook. Let's do him proud.

Al Tucher is the author of many stories about the delightful Diana. You can find him here. 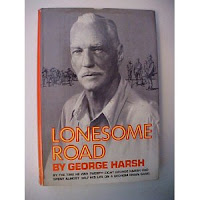 
Since 1986 I have worked as a cataloger at the Newark Public Library, which has existed since 1883. The library has some very deep collections, and exploring them is both my job and a perk of my job. A recent project in the biography section brought me into contact with Lonesome Road, a 1971 memoir by George Harsh.

In 1928 Harsh was a rich, arrogant, idle young college student in Georgia. He and other rich, arrogant, idle young men spent much of their time discussing their superiority over the masses and the uses to which they should put that superiority. This was only four years after the Leopold and Loeb case, but it seems part of the “superman” pathology to dismiss possible lessons from anyone else’s experience. The young men in Harsh’s circle decided that they were able and therefore obligated to commit the perfect crime.

For the thrill of it they began a string of armed robberies. When a store clerk resisted, Harsh was the one holding the gun and the one who fired the lethal shot.

The police easily caught the young supermen, and Harsh was sentenced to death. His codefendants received life sentences, and the prosecutor, troubled by the disparity, succeeded in having Harsh’s sentence commuted to life. Writing years later, Harsh is unsparing toward his young self. He deserved to hang, he says, but he received more mercy than he had shown with the gun in his hand.

He spent the next several years on a Georgia chain gang that was brutal even by the standards of the time and place. Eventually, he became a trusty with a job as an orderly in a prison hospital.

Here we encounter the first of several plot twists that only reality can get away with writing. When an inmate needed an emergency appendectomy, a freak ice storm kept the staff physicians from reaching the hospital. Harsh, who had assisted at several such operations, performed the surgery and saved the man’s life. The governor of Georgia pardoned him.

The year was 1940. George Harsh felt undeserving of peace and security while so much of the world was at war. He traveled north and joined the Royal Canadian Air Force. Harsh flew numerous bombing missions over Germany. His luck ran out in 1942, when he was shot down. His captors sent him to Stalag Luft III.

Fiction writers, try getting away with that one. In the 1963 film The Great Escape, the character called Intelligence, played by Gordon Jackson, is based on Harsh. He was not one of the 80-plus POWs who made it through the tunnel before it was discovered, which was just as well. Only a handful made it to safety. The rest were recaptured, and the Gestapo summarily executed more than fifty of them.

Harsh survived a brutal forced march westward, away from the advancing Red Army. His narrative ends there.

His story does not. In 1945 he was in his mid-thirties and had spent mere days as a grown man neither incarcerated nor at war. In another twist that in its own way might be the strangest of all, he worked for a while as a publisher’s traveling sales representative. The experiment in freedom was not a success. The memory of his crime tormented him, and he attempted suicide. Later he suffered a stroke, and in 1980 he died.

No collaborator in the writing of this book is named. If it is Harsh’s work, it counts as a remarkable achievement. He knows when and how to make his writing as terse and urgent as Morse code in the night, and his meditations on freedom, imprisonment, violence and war come with a hard-earned authority.

Did George Harsh atone for his crime? It’s a tough call that will vary from reader to reader. Does his book deserve a place on the shelf? In my mind, beyond all doubt.

My alter ego has an FFB: The James Bond Dossier by Kingsley Amis.

Hello Patti, I have a small post for FFB. It is titled "The novels of Jack Higgins" and the link is — http://chesscomicsandcrosswords.blogspot.com/2015/09/the-novels-of-jack-higgins.html Many thanks.

I actually have one this week. A title that has been covered by several other FFB participants, The Thirty-Nine Steps by John Buchan, http://booksareforsquares.blogspot.com/2015/08/listened-to-thirty-nine-steps-by-john.html

I am only getting TEQUILLA SUNRISE, Gerard. I will look a little later.

Okey-dokey and another thanks for putting this together each week.

Thank you so much for including my post on unknown authors (for me) but I have a post ready for this Friday:

This week I reviewed two mysteries by Jefferson Farjeon: Seven Dead and The Z Murders, one of which was reprinted recently.

Thanks for all you do each Friday, Patti!

I'll have mine up shortly...there might be something funky about the Nick Jones link.

Thanks, Patti--the Jone link works now for me (odd that so many see the editions of the Highsmith *not* titled THE PRICE OF SALT...

Mine up: PUNAHOU BLUES, Kirby Wright and awaiting your (everyone's) perusal. Thanks again.

Great choice, Patti! And as ever, so many fine books in this week's list. Thanks for including mine :-)