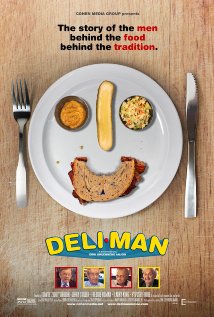 Although this isn't exactly forgotten (2014), it is fairly obscure. It is playing on Amazon.
This documentary focuses on Ziggy Gruber, who co-owns a large deli in Houston and is also the grandson of the original owner of the Rialto Deli, the first Kosher deli to open on Broadway in New York City in the 1920s. The deli is the main love in this man's life. While the film also covers other famous Jewish delis in Manhattan, Queens, Los Angeles and San Francisco and their histories, the emphasis is on the cultural aspects of the food and how the culture and the desire for this food is disappearing. There were once thousands of these delis and now there's fewer than 150 left in the entire U.S. Such luminaries as Larry King, Jerry Stiller, Fyvush Finkel, Freddie Roman and Alan Dershowitz as well as various deli owners express their love for the culture and the food.

This is the description on IMDB and I would add that it sort of spells a death knell for the deli except as a cultural artifact. The food isn't healthy and younger people have not acquired the taste for it that their parents had. Ziggy is a great character and along with the deli, the love of his life is his grandfather who gave him his first apron at eight.

However nothing beats (for me) a corned beef sandwich on rye with coleslaw, swiss cheese and Russian dressing. I grew up in a neighborhood where this was as common as a hamburger. How about you? When was the last time you had lunch in a deli? I bet unless you live in an urban area, it was quite a while ago.
Posted by pattinase (abbott) at 6:37 AM

You're right--I haven't eaten at a deli in close to 30 years. When I lived in L.A., we'd occasionally go to Cantor's. Once, when I was single and far from family, a friend and I went there for Christmas dinner! The odd thing is, I don't remember what I ate, but I'm guessing either corned beef or pastrami was involved.

Sunday. We had brunch in a local coffee shop/deli/Greek diner, depending on the definition, though I probably wouldn't actually characterize it as a deli per se. .

As to what I'd call an actual "deli"? We went to John's Deli on Stillwell Avenue in Bensonhurst this August. That's an Italian deli. As for the traditional Jewish deli, we went to Flakowitz in Boynton Beach when we were in Florida this March.

Oh, there's nothing like a good deli! It's been a while for me.

Deli food has been replaced by food trucks here.

The Althaus Delicatessen in Newport News was a favorite lunch place for years for Daily Press reporters. The owner, Sam Althaus, still had a number, tattooed at Auschwitz, on the inside of his forearm. Remembering his Rubens, pickles and potato salad still makes my mouth water. He also catered a few of our newspaper parties. Wonderful man. He and his place are long gone. Sam Althaus

1972, Mohegan Lake, New York. I'd walk miles down a country road just to buy a potato knish. I was too poor for a sandwich. I don't remember even seeing a real deli since I returned to the West Coast in 1973.

Many years ago I saw a newly-opened Italian deli here in Tacoma. I walked in and ordered a meatball wedge. The counter girl asked, "Do you want lettuce and tomato on that?" I said, "I don't give this place six months." I was right.

Patti--did you get my FFB? I sent it to your Wayne State email, but not sure if you're still using that since your move. Let me know if I need to send to a different email address. Thanks!

I am using aa2579@wayne.edu but I didn't get it. Send it again please. I am in Grand Rapids till Th.

I just got your email saying you got it, so I won't resend to the other email address unless you need me to. Thanks!

Winnipeg still has a number of delis incuding ones called Bernstein's and Myers within about two minutes driving of my house. I occasionally stop at Bernstein's to buy chopped liver for a sandwich. Years ago when I worked in our downtown area I would go to a place called Oscar's for a chopped liver sandwich to take back to my office. Always asked for hot mustard and one day the woman at the front counter asked if I wanted a slice of tomato with it. I had never heard of that combination that didn't sound like it would work, but she promised me that it did. She was correct so now I always put tomato in a chopped liver sandwich. Try it; you will be surprised. The North End of our city that had a large Jewish population was filled with delis, but many are gone. I still go to a place in the North End that specializes in a Montreal smoked meat sandwich, which I prefer to pastrami or corned beef. Think I'll jump in my car and go to Bernstein's.