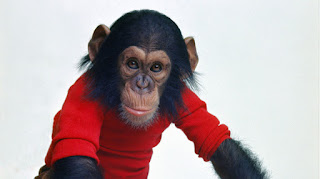 PROJECT NIM was a documentary made in 2011. It concerns a chimp, taken from his mother shortly after birth, raised for a while by a human family and then the subject of various experiments in the use of sign language by chimps. But what the experiment devolved into was an experiment in how chimps, especially male ones, are far too strong, sexually interested and completely thrown off stride by such experiments. Nim's situations deteriorate until he is finally sent to live in a facility for mistreated animals--which he was although inadvertently.
This is one of the saddest tales I have even seen. There was no way it could have turned out any differently, He was deprived on any sort of normal chimp life-or any kind of human one. Poor Nim.

Oh, goodness, I have to say I've never read of this one. Or if I did, it was just a mention of the title, not anything about the film.

I would also recommend Elizabeth Hess's book, NIM CHIMPSKY, which I believe is the basis for the documentary and covers not just Nim but the multitude of other primates adopted or used for human purposes and then were discarded when noon get of use or no longer "cute." The story of the crazily dysfunctional family who adopted Nim is worth the price of the book alone.

For a fictional look at this phenomenon, Karen Joy Fowler's WE ARE ALL COMPLETELY BESIDE OURSELVES (also influenced by NIM CHIMPSKY) is excellent.

Yes, I read the Fowler book and also some studies for a story I did "Monkey Justice."
Animal experimentation almost never has good outcomes for the animals, does it? Even one like this which was not aimed at pharmaceuticals for humans.

Like Deb, I immediately thought of the Karen Joy Fowler book, one I won't soon forget.

Lana and I watched this and were devastated. I knew the story from years before because we talk about it in psychology but this was the first time I'd been "behind the scenes" so to speak.

One of the reasons I gave up on being a psychology major in college!

Yes, and the experimental design of this project was insanely poorly thought out at every level, particularly considering their ambition was to prove that chimps couldn't be taught nor grow to intuit human speech. Hence in part Nim's punning name.

I'm glad Fowler is getting some love here...she's one of the best to come out of the sf community in the last couple of decades. "Rachel in Love" by Pat Murphy is also worth a look thus: http://will.tip.dhappy.org/blog/Compression%20Trees/.../book/by/Pat%20Murphy/Rachel%20In%20Love/