What actor does everyone like--except you?

I have to shut my mouth coming out of a theater in a film with Paul Giamatti in it. The first think someone will say is, "I loved Giamatti's performance."

I have seen Paul Giamatti in two movies this summer and in both he played the same sort of character. He's also played that part in almost every movie I have seen him in. I don't get why so many people love his acting. The only film of his I enjoyed was SIDEWAYS and that on a second viewing lost its luster. I know, I know. John Adams. Well, maybe so but what about the rest.

Who is your Paul Giamatti? 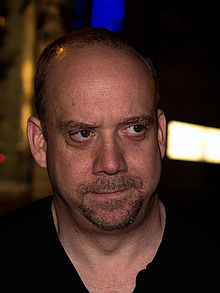 I like Giamatti sometimes but not always, but I know what you mean. He was pretty annoying in the Brian Wilson movie LOVE & MERCY but he was playing an awful guy! What about in BARNEY'S VERSION or WIN WIN? THE IDES OF MARCH? Still didn't like him?

Who don't I like? So many, it is hard to narrow it down to one, or a few. OK, let's start with the obvious - Ben Stiller. A like-minded friend once called him "an ugly, charmless troll" and though perhaps a little strong, I don't like him. Adam Sandler. The mugging "look at me!" Giovanni Ribisi. All actors who think whispering is acting, or perhaps just a sense that they're menacing. The bland Ryans, Reynolds and Gosling, though neither rises to the level of active dislike. Shia LeBoeuf, or does that go without saying? It should.

To me, he seems unable to adjust his acting style-it's always similar. And I agree esp. with Ben Stiller. And now I am adding Jesse Eisinberg. He also plays the same slightly slimey New Yorker.

I'm not a fan of Owen Wilson.

Nor I. His brother Luke is no better for me.
Interesting we are all choosing men.

Yes, Jesse Eisenberg and the Wilson brothers are on my list too.

I did notice that about men vs. women, Women? Kate Hudson comes to mind.

There are a lot of actors who, it seems to me, are one trick ponies. Most of these are comedic actors. Will Ferrel, Ben Stiller, Jack Black, Chevy Chase, Bill Murray. I won't say that I don't like the actor because I don't personally have any idea how acting is supposed to work. I will say that I very seldom watch and enjoy movies by these actors, and in the few cases where I have it was because of other actors in the films who played off of these guys.

I have mostly seen Giamatti in supporting roles. He was good in SAVING PRIVATE RYAN and really good in CINDERELLA MAN.

I'll second Bill Murray as an actor I have never warmed up to. He seems like a really cool guy, I just don't think he's that great on film. But I haven't seen some of his most famous roles, like LOST IN TRANSLATION or THE LIFE AQUATIC.

Leonardo DiCaprio. I especially don't get him in tough guy roles, in which he looks like a high school kid doing GUYS AND DOLLS.

I suspect his career will survive my poor review.

Sean Penn wins the award: "The Actor I Will Never Watch Again." Oh, the reasons are numerous, but his Xeroxed performances head the list. I know he has legions of fans. I am not among them.

Unknown said...
This comment has been removed by the author.
9:35 AM

Unknown said...
This comment has been removed by the author.
9:36 AM

I must say I agree pretty much with all of these choices.

Funny post, Patti. I second Jeff M, there are many. Notice, all the comments mentioned current actors. Were stars and supporting players more likable in old movies?

Most of the males mentioned have appeal that has always eluded me (particularly Bill Murray, who is about my age but looks nowadays to be somewhere between 80 and rigor mortis).

- Faye Dunaway.
THE most annoying female presence on any screen ever.
At least I know now who Ann Coulter stole her on-camera style from.

The obvious ones have been mentioned--Ferrell and Sandler. Among the females I can't abide Judy Densch or Glenn Close.

Uma Thurman for me. I've never understood the attraction.

Sandra, I like Uma Thurman in the Kill Bill movies if only because when I see the action scenes, I know she's being played by Zoe Bell and I love her.

Kevin Costner anymore is a guarantee I won't see the movie.

I find I've burned out on Morgan Freeman too. He's always the same guy in his movies, it seems.

When it comes to women, I'd say January Jones. It's possible she hasn't done enough movies to qualify, though.

Keira Knightly. All of the female actors in MODERN FAMILY. Yes, January Jones.

Kate Hudson. I'd forgotten about her because I avoid anything she is in.

One the flip side: I watched the first of the WORRICKER trilogy and think Bill Nighy always does well.

Yes, let's do that next week. Who always does a good job among the current actors especially.

Kevin Costner is probably the most over-rated actor working today and almost all his movies leave me cold. Coming in at a close second is Val Kilmer. Anything that he has done since REAL GENIUS has been dreadfuland the title credits should read "Val Kilmer's ego." Speaking of ego, Tom Cruise (who has shown real talent in the past) has become a smirking charicature of himself, probably from drinking too much Xenu.

In the past, Dudley Moore was a deadly dud.

As for women, I'm too much of a gentleman to name names.

If we're adding television actors, I'd start with Mr. Stubble, Dylan McDermott, aka the Whisperer. He seems to me to be the first who popularized that look and that acting style.

I wonder if we will have more trouble coming up with good ones?

I second both Seth Rogen and James Franco. Apart and together, their douchebro act (is it an act? Who knows? Who cares?) leaves me cold.

Back in the day, John Heard (perhaps best known as the father in the Home Alone movies) made my skin crawl. He was in a number of prestige productions in the seventies and eighties and I couldn't watch any of them.

I know everyone finds Amy Adams a darling, but she's an actress I have difficulty warming up to, regardless of the role.

I agree on Franco and Rogan and most of all Will Ferrell. I like Amy Adams sometimes - American Hustle, Enchanted, Sunshine Cleaning.

Now Anne Hathaway I can do without, for the most part.

Fascinating question, Patti. As usual I have a slightly different take. Most of the people named here I've liked at least once or twice with the exception of Kate Hudson and Seth Rogan. For me the most overrated popular actor of all time is Warren Beatty. This guy probably preens in his sleep. It's about all he does in screen anyway.

This may show how little I go to the movies anymore, but I nominate Jim Carrey and Renee Zellweger. Can't stand either one of them.

Why is it I agree with almost every choice. And if these actors are universally disliked how do they get parts. Some I liked once (Nicholson and DeNiro) and others I never liked: Hudson and Penn.

We shouldn't conflate Jack Nicholson's noxious characters with the actor. His portrayal of Udall in As Good As It Gets was brilliant and comic.

Jack Nicholson always and forever and I wrote that before I read the last few comments.

I loved AGAIG and many of his early films. But lately, not so much as with DeNiro and Pacino too.

I thought of more. Anthony Quinn; I can't abide his mumbling. Howie Mandell; he may not be an actor but his TV presence makes me cringe. And of course I won't see anything with a Scientologist jerk in it.