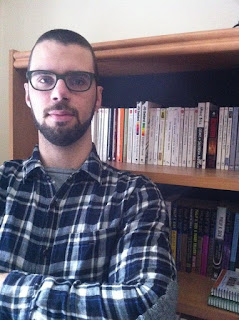 Right now, I have three piled up. Repo Shark, by Cody Goodfellow, Disintegration, by Richard Thomas and the NBA Coach Playbook, because I’m a giant hoops nerd and I’m preparing for next season by reading about Xs and Os.

It’s a trickier question than it seems. Right now, it’s between Dennis Lehane and James Ellroy. I would’ve told you Lehane no doubt a couple years ago, but the more I evolve as a reader, the more I gravitate towards Ellroy. I love his ruthlessness and his moral ambiguity. He’s a writer or great ambition and integrity.

There are less and less of those, because I’m selling so many books. Whenever I move or my bookshelf overflows, I weed out the books I deem unnecessary and I keep only the ones closest to my heart.
I suppose it would be one of the strange books my mother offered me. We read for fundamentally different reasons, but she has a hard time understanding that. One Christmas she offered me a self-help book written by a feminist psychologist called Seeking the Self and the Other, because she heard it was great on TV. It would be that book. I read the damn thing!

It’s a great question. There are so many great ones. The character I had a huge narrative crush on in recent years is Boyd Crowder, from the television series Justified. He was the embodiment of the devil to me: smart, manipulative, violent, consumed by his own darkness, yet I couldn’t help but to root for him. I love character that force you to take a moral stance about them.

Because of my reviewing duties, I don’t have a lot of time to go over books more than once. I’m not complaining or anything, it’s a choice I’ve made, but it’s one of the consequences of it. Although I’ve recently read Love and Other Wounds, by Jordan Harper, which has several stories in it that were in his previous collection American Death Songs. It was a wonderful experience going over these fantastic stories once more and being able to focus on Harper’s magnificent prose.

Benoît Lelièvre is a pop culture blogger and author living in Montreal, Canada. You can read him 5 days a week at: www.deadendfollies.com

I do like both Ellroy and Dennis Lehane! And I know all about overflowing bookshelves...

Good one, and Boyd Crowder was indeed a wonderful character.

Nice. But Benoît may need more books set in Montreal on his shelf.... ;)

My feelings toward Lehane and Ellroy parallel Benoit's. I always look froward to a new Lehane, but Ellroy grips me in a different way as I get deeper into his oeuvre.

And, yes, it was Boyd Crowder who made Justified as special as it was.

Well, Benoît, the classic one is probably The Main by Trevanian. For an American he got a lot of it right, but I still think that book is more of a sly satire on the detective novel rather than a straight ahead detective novel.

How about Martin Michaud? Or Trevor Ferguson writing as John Farrow, his Emile Cinq-Mars novels are good but River City is amazing - a crime novel that starts with the Richard riot but goes back to the founding of Quebec and works in almost every big event in its history.

I've been trying to get my hands on The Main for a couple years now and I might not be doing it right, but it is quite difficult.

I've read Trevor Ferguson's latest novel and I quite liked it, to be honest. It was a random ARC I received from S&S Canada in 2013 or 2014. I'll keep an eye out for Michaud and Cinq-Mars. Aren't your book located in Montreal, too?

It's Toronto, not Montreal, but try Howard Engel's Benny Cooperman mysteries. Or better yet, Eric Wright (yes, I know he's English, but he lives there) and his Charlie Salter books. Or Ted Wood's Reid Bennett books.

OK, these are all Toronto-based. Then what about Mordecai Richler?

Trevanian is an odd guy. He wrote million-selling books in different genres but only one each. Don Winslow wrote a sequel to Shibumi a few years ago. I think if Trevanian had written more novels set in Montreal featuring Detective LaPointe it could have been one of the great series. But like you say, it has now fallen into obscurity.

Earlier this year I read and enjoyed Viglante Season by Peter Kirby. The main character is Inspector Luc Vanier, who is trying to deal with problems in the Hochelega district of Montreal. I think it was the second in the series and I want to find the latest. John McFetridge mentioning John Farrow's River City will get me to take a closer look at it. I've had the ARC, which comes in two large sections,sitting on a shelf, but always seemed to get scared off by its size. Because of its section on the Rocket Richard riot, i had it with my hokcey fiction collection, which I was boxing yetsterday. For some reason and now I know why, I kept it out.

How about Louise Penny's books? I know they're set in Quebec.

Montreal was super violent back then, organized crime had the city cornered. I should check out your novels, sir. I loved Trevanian's Shibumi and have been looking forward to reading another one. The Main looks amazing.

@Kent: Thanks, I'll check that out. Hochelaga it still pretty wild, but it's more poverty and drugs than organized crime now. The gentrification train is also at work on it. Funny story, someone found an alligator in a back alley in H-town. Big fucking surprise I had when they found his owner...I KNEW HER! You think you know people until you find out they have a pet alligator.

David Montrose wrote four PI novels set in Montreal in the early 50s. Murder on Cote des Neiges, Murder Over Dorval and two others. They are interesting to read today,if somewhat florid and often implausible.