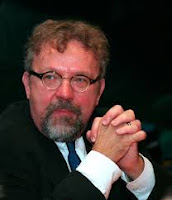 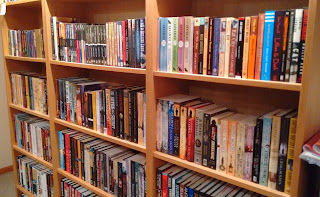 There are a couple of soon-forthcoming releases -- Art Taylor’s On the Road with Del & Louise and Mark Coggins’ No Hard Feelings -- along with several books that are currently available: Kill Me, Darling, by Mickey Spillane and Max Allan Collins; Orient, by Christopher Bollen; Rubbernecker, by Belinda Bauer; A Pleasure and a Calling, by Phil Hogan; and Gary Krist’s Empire of Sin: A Story of Sex, Jazz, Murder, and the Battle for Modern New Orleans. But since I tend to read books in a variety of places, I should note that there’s a copy of Robert Kyle’s first P.I. Ben Gates novel, Blackmail, Inc. (1958), in my car and one of Peter Lovesey’s latest Peter Diamond mystery, Down Among the Dead Men, calling to me from my downstairs bathroom drawer.

That’s an impossible call. But I can say that the authors I go back most often to reread--which means they speak to something inside me that most writers don’t--are Ross Macdonald, Larry McMurtry, Gore Vidal, Raymond Chandler, Jules Verne, Arthur C. Clarke, and E.L. Doctorow.

On a Grander Scale: The Outstanding Life of Christopher Wren, by Lisa Jardine. Actually, I have two long shelves filled with books about modern and historical architecture. My father was an architect, so I developed an interest in the subject early in life. At one point I even considered becoming an architect myself … until I discovered how much algebra was involved (algebra being my least favorite subject of all time).

This is certainly your most challenging question. I’m going to go with Nate Heller, Max Allan Collins’ Chicago-based private eye. Much of the reason has to do with Heller’s proximity to the famous and infamous characters of the 20th century. I’d love to have met Al Capone, Sally Rand, Bugsy Siegel, Bobby Kennedy, and Amelia Earhart, as Heller has over the years.

There are three novels that I’ve reread more than any others: Ross Macdonald’s Moving Target, his first Lew Archer adventure; Jules Verne’s Around the World in Eighty Days, which I first bought as a teenager; and Arthur C. Clarke’s Childhood’s End, a slim paperback that stunned me as a boy, and still feeds my imagination. The books I most want to reread sometime in the future are Lonesome Dove and Larry McMurtry’s sequel and prequels to that work. This time, however, I plan to enjoy those books in chronological order of their story, rather than in the order they were first published.

J. Kingston Pierce is a longtime journalist in Seattle, Washington, and editor of The Rap Sheet, a crime-fiction blog that has won the Spinetingler Award and been nominated twice for Anthony Awards. He also writes the book-design blog Killer Covers, holds forth as the lead crime-fiction blogger for Kirkus Reviews, serves as the senior editor of January Magazine, and has published more than half a dozen non-fiction books.

Haha! Always love The Rap Sheet, so was immediately intrigued at a glimpse behind-the-scenes as soon as I saw that your book shelf was being featured. Never expected to see my own book on the shelf! (And thank you, of course!)

I'm with you on Macdonald, of course--always--and you're reading is like mine: books in various places, dipping into them wherever I happen to be at the time.

Quick anecdote on Larry McMurtry: Back during the fiction workshops I took with Alan Cheuse at Mason (sadly, the late Alan Cheuse), he would go around at the beginning of each class and ask what people were reading. One good friend of mine finally got embarrassed to say week after week that he was *still* reading Lonesome Dove, so he made up something else--but told us on the side that he just didn't want to finish it because he was enjoying it so much!

Thanks for the q&a here--much fun!

Wow, your bookshelves are so neat, Jeff. :) Good to see some Rex Stout books lined up too.

I think books are beautiful, Yvette. I like to keep them neat as a way to dress up every room of my house in which they can find a place to live.