This is the second in a series of three novels about PC Camille Verhoeven, of the Paris police,who  returns to work after recovering (somewhat) from a personal tragedy. His first case concerns, Alex, a young woman who has been kidnapped from the Paris streets. A second POV, Alex' makes it clear what has happened. She is suspended in a crate where she cannot sit, lie down or stand. It is up to Camille to figure out where she is, who she is and save her.

There were more twists in this book than any I can remember. And every one of them worked! Just when it seems like the case was solved, there's another turn in the road. This is a violent book and not for the faint-hearted. And despite my late life pledge not to read more than one book in a series, this one might change my mind. Highly recommended. (And it won its author the International Dagger Award for Best Crime Novel of 2013. Not forgotten but perhaps not known to you. 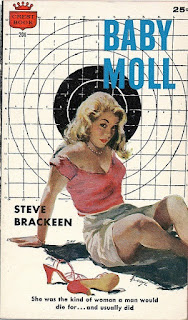 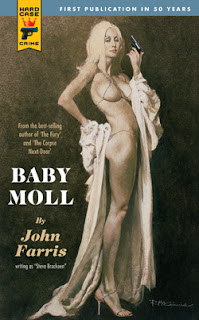 John Farris was my generation's first literary rock star. When his novel Harrison High was published it quickly became controversial because of its honest depiction of life among American teenagers. This was 1959. America still believed that if teens weren't exactly like Ricky and David Nelson they certainly weren't like Elvis. Given the fact that many of these teens would be in the streets protesting the Viet Nam war only a few years later, you can see how badly books such as Pat Boone's Twixt twelve and Twenty misjudged them.

The paperback edition became a companion to Peyton Place, published a few years earlier, both Great Reads and both purveyors of unpopular truths.

Mr. Farris, now famous, was all of twenty-three when the book was published. But he was no beginner. Born in 1936 he could already claim the following novels in print:

He was writing and publishing before he could legally buy beer.

Hard Case Crime has now given us a chance to look at some of Farris' early work with Baby Moll appearing this month. And fine work it is.

"Six years after quitting the Florida Mob, Peter Mallory is about to be dragged back in.

"Stalked by a vicious killer and losing his hold on power, Mallory’s old boss needs help—the kind of help only a man like Mallory can provide. But behind the walls of the fenced-in island compound he once called home, Mallory is about to find himself surrounded by beautiful women, by temptation, and by danger—and one wrong step could trigger a bloodbath."

If you have any doubt about Farris' writing skills open the book and read the first chapter. It is both lyrical and ominous, an unlikely combination in a paperback crime novel. This establishes the way Farris even then managed to take some of the familiar tropes of genre fiction and make them entirely his own.

The set-up itself is unique. Mallory called back to save the life of a boss he despises but a man he owes his life. The boss got him off the bottle.

The story, as it plays out, is also all Farris'. While parts of the first act brought Peter Rabe to mind Farris takes the gangster novel in a different direction. Given the relationship of the people on the island the book becomes almost Gothic in its entanglements and ambience.

Farris of course went on to write numerous bestsellers, a number of them staples of modern dark suspense and horror, but even here, early on, he was a cunning storyteller fascinated by the perplexity and perversity of the human soul. A good deal of his horror will live for generations to come. He is a true master.

I did like BABY MOLL, which I read when Hard Case's edition came out in 2009. But I also really liked his SHARP PRACTICE, which I read nearly 30 years earlier.

PS - Is there going to be another "Author of the Week" as in the past?

Do you have an idea for one?

Mine's up now. Thanks, Patti!

A Taste for Honey by H. F. Heard

I have a suggestion for author of the week. Since we've done already done a tribute to Margaret Millar, why not one for her husband Ross Macdonald?

I need to see the list again of the ones we've done: Millar, yes, plus Elmore Leonard I believe, Donald Westlake, John D. MacDonald...?

We've done Christie too. How about Ed McBain? I don't think enough people would want to read Hemingway.

I was going to say McBain. I didn't think he'd been done. And I have 93 titles already read to choose from!

I will make it for the first Friday in October. Sept. is just a real wipeout for me.

Going to have to look for this. Have not read this author

Please include my entry for this week: Midnight Frights: A Collection of Ghost Stories.

John--I think we did a Ross McDonald a few years back. Others will correct me if I'm wrong.

If we do Ed McBain, I assume we can write about the books he published as Evan Hunter too? If so, I call MOTHERS AND DAUGHTERS.

And I'm finally up and discursing and digressing:
Yesterday's Tomorrows, edited by Frederik Pohl; Editors, edited by Saul Bellow and Keith Botsford

I suppose I can attempt to find an example of McBain/Hunter/Lombino/etc. fiction that isn't at its heart profoundly stupid, in some important detail if not thoroughly. A challenge.

That is one I have that I haven't read as yet so I will be looking forward to the review. I've read all the 87th Precinct and Matthew Hope books as by McBain, the two "Curt Cannon" books and three by "Richard Marsten," a bunch by Hunter, several volumes of short stories and even a YA.

And yet I still have a number of books unread on the shelf - MOTHERS AND DAUGHTERS is only one of them. (Other pseudonyms include Ezra Hannon, John Abbott and Hunt Collins.)

I remember reading HARRISON HIGH and wondering at the difference between it and the high school I was going to, which was more like the one in "Happy Days".

So it's already decided: McBain? OK. Jeff, I'll be emailing you for ideas on this. Watch the e-inbox.

I would have suggested some other authors, but I'll submit some ideas for a November one.

Posting a late entry--and my first here, so if I made any errors in protocol, put it down to that.

Chris said...
This comment has been removed by the author.
1:15 PM

Chris said...
This comment has been removed by the author.
1:26 PM

If everyone else has a problem like Todd's with McBain, we can find someone else. I am not wedded to him. But his output allows many people to participate.

Instead of a single review of a McBain novel you should list your reasons for disliking the novels. That would be an interesting read. (That was not sarcasm, by the way.)

Patti, I finally got one posted for today. Thanks for your forbearance. Frazzled as usual - motto of my life. :)

I have only read Farris' THE FURY, which on the whole did not impress me greatly (I preferred his screenplay fo rth emovie version in fact). This sounds much more fun!

And, no I'm not about to spoil the party thus! (Though I'm tempted, as Gerald suggests to go back through all the handy items and refresh my memory of things such as the supercilious teacher, wanting to play these rotten, ignorant kids Some Good Music, does so by bringing in supposedly irreplaceable shellac 78s only, surprise, to have the superannuated brats smash them...who could've foreseen? How many collectors will refuse to handle their own copies of the hugely rare and fragile, much less lug them into even a well-behaved classroom?)

Please, don't begin to not go Hunter week on my account. (It would be as nothing compared to what I might say on Hemingway week, where one of the books in my queue is by someone who had the misfortune of being around him in the Spanish Civil War.)

If I could eventually, on something like the twentieth try, find something by TC Boyle that was actually worth reading, there's a chance that a Hunter, even if not a Curt Cannon, will do the trick.

Here's something involving Larry Shaw and Hunter, oddly enough, given my citation of Shaw this week:

(One [account of life at If: Worlds of Science Fiction magazine] which definitely caught my eye detailed editor Larry Shaw's run-ins with Evan Hunter, whom he found unpleasant, not least when Shaw sought to have him correct an error in his famous, overrated story "Malice in Wonderland," and Hunter replied, "Well, it's only science fiction, after all." A kind of irresponsibility I tend to find in all the Hunter [McBain, et al.] fiction I've read.)

I only just now read that SIERRA won the 1996 Spur Award. I am not surprised, and only 19 years late.