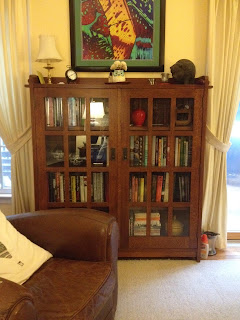 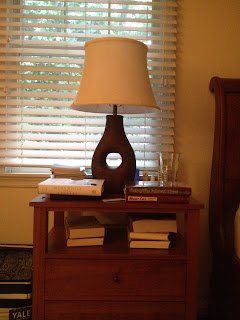 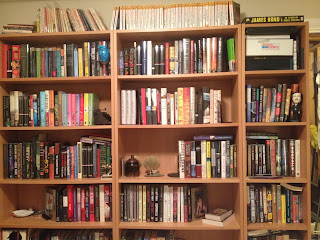 I thought about answering this with what I’m actively reading now (some on my nightstand but others spread throughout the house and in my office on campus), but I’m going to be strictly literal instead. Currently on my nightstand: The Boy Who Followed Ripley by Patricia Highsmith; Night Call and Other Stories of Suspense by Charlotte Armstrong; Meanwhile There Are Letters: The Correspondence of Eudora Welty and Ross Macdonald, edited by Suzanne Marrs and Tom Nolan; The Black Lizard Big Book of Locked Room Mysteries, edited by Otto Penzler; English Country House Murders: Classic Crime Fiction of England’s Upper Crust, edited by Thomas Godfrey; The Columbo Collection by William Link; Complete Stories: 1892-1898 by Henry James; The Big Knockover by Dashiell Hammett; Freddy the Detective by Walter Brooks; All Due Respect Issue #5 (with stories by Steve Weddle, Keith Rawson, and Angel Luis Colón, among others); eight issues of Ellery Queen’s Mystery Magazine (June, August & December 2014, and February, May, June, July & August 2105); and my Kindle. I also keep a notebook by the bed (always) with a pen tucked in it, waiting.
Who is your all-time favorite novelist?
Probably Mario Vargas Llosa. I first became a fan back in college in the late 1980s, long before he won the Nobel Prize. Even though I’ve only read his work in translation, he strikes me a thrilling stylist, and there are few authors I’ve encountered who’ve done more interesting work at the level of structuring narratives (maybe Ian McEwan, another favorite). Vargas Llosa is also one of our finest and most inspiring critics, and I’d recommend his book Letters to a Young Novelist to writers and readers both. My favorite novels of his are Conversation in the Cathedral and The Real Life of Alejandro Mayta—the latter a detective story of sorts.
What book might we be surprised to find on your shelves?
Martha Stewart’s Housekeeping Handbook: The Essential Guide to Caring for Everything in Your Home (though folks who know me well probably wouldn’t be surprised).
Who is your favorite fictional character?
Nancy Drew was a first love in a couple of senses of the term; not only do I adore the stories, but I’m certain she had a formative impact on the types of girls I was attracted to in middle school and high school—and probably the women beyond. (I’ve only read one Hardy Boys book, and I didn’t care for it.) It’s also fascinating to study Nancy Drew from an academic standpoint: the way that the character and the books have shifted over the decades to reflect, respond to, and even shape the perspectives of their times, particularly in terms of gender identities and values.
What book do you return to?
The Long Goodbye draws me back in again and again…and again. It’s a shaggy novel in many ways, but incomparably brilliant. Red Harvest is such a thrill to read and reread and fun structurally too. I’ve also read Anna Karenina several times—high school, college, and long after graduation—and I'd pick it up again in a heartbeat; the whole world there.

Art Taylor has won two Agatha Awards, a Macavity, and three Derringers for his short fiction in addition to being twice named a finalist for the Anthony Awards. His Agatha Award-winning story “The Odds Are Against Us” is currently a finalist for both the Anthony and the Macavity Awards. His novel in stories On the Road With Del & Louise will be published in September by Henery Press. He teaches at George Mason University and writes frequently on crime fiction for both the Washington Post and Mystery Scene. www.arttaylorwriter.com.

Good one. I've read a lot of the books on his night table.
Jeff M.

Thanks for hosting me here, Patti! Such fun to be part of this series. :-)

I've got a bookshelf in my bedroom with the books I plan to read next!

Ah, someone who's read Llosa! Loveit! And those bookshelves are absolutely beautiful!

Oh, yes, Margot! He's great, isn't he? I've had the chance to hear him speak a couple of times as well, and he's just as mesmerizing in person.

And thanks for the comments on the bookshelves too; that first one was a splurge many years ago! No regrets on it, ever.
:-)